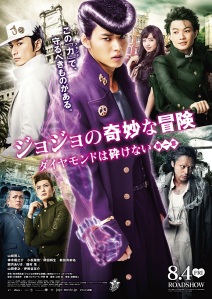 I look at Takashi Miike’s adaptation of the world-famous manga – for those who aren’t too familiar with it.

“I don’t care about Stands or whatever this thing is called! But how dare you insult my super fantastic hairdo!”

Ageless immortal Hirohiko Araki is the creator, author and artist behind the batshit-insane and truly incredible JoJo’s Bizarre Adventure. Despite only really becoming big in the West in the past decade, the series has been a massive hit in Japan for over thirty years and has spawned a number of video games, a (terrible) animated film, an (equally terrible) OVA and eventually, the currently ongoing animated series, which is one of my favourite things currently airing. Surprisingly, though, it was only two or three years ago that we saw a live action film come to fruition. And it came from none other than a filmmaker almost as batshit as the source he’s adapting: Takashi Miike.

Diamond is Unbreakable is about, well, a number of things. But mostly it’s about young Japanese teen Josuke Higashikata (Kento Yamazaki) who is normal in most respects, except he has the ability to control a spectral fighting force called a Stand. His peaceful life in the town of Morioh is upturned when a man named Jotaro (Yusuke Iseya) appears, claiming to be family and showing Josuke that he too has a Stand. He’s come to Morioh to track down a Stand-using serial killer (Takayuki Yamada) and to figure out how this guy acquired that power. Along the way, they encounter a number of weird characters like the hapless Koichi (Ryunosuke Kamiki) and the shady Nijimura brothers (Masaki Okada and Mackenyu as Keicho and Okuyasu respectively).

To say much more would be confusing to anyone not familiar with the source material and it’s probably best for the movie to speak for itself. If you are new to the franchise, Diamond is Unbreakable is definitely going to be a strange, wild ride and it isn’t always going to be the most cohesive. Within fifteen minutes we’re introduced to about a dozen different, increasingly baffling concepts and questions: Why is Josuke’s dad Joseph mentioned by name the way he was? Is he important? Where to Stands come from? Why are there just so many characters? I know the film title is proceeded by Chapter 1, but it still throws a lot at an audience who might not be so familiar with the property (especially outside of Japan), and just sort of expects them to roll with it with the vague promise that maybe Chapter 2 will explain just what the hell is going on.

Japan has always had a good track record for accurate depictions of its manga and anime properties, normally leaning hard into the costumes and out-there elements in a way American comic book movies have only just discovered how to.  However, there are times when adaptation is necessary (despite everything wrong with it, the Attack on Titan movie knew it needed to do its own thing seeing the story is still ongoing). You tend to see a lot of two-part adaptations, and for good reason: four hours of movie roughly translates to one 10-14 episode cour, which tends to cover about an arc of story. This is the direction Diamond is Unbreakable is taking but with hopes of a sequel in doubt, this is just a messy story with no set-up and even less conclusion. Technically, the fourth part of JoJo is its own story but there’s such a sheer amount of backstory and legacy that’s ignored that it’s difficult to recommend instead of just seeing the show.

But I feel like I’ve done nothing but ragged on a movie that I frankly really enjoyed, and anyone who’s familiar with the show or the manga can check out my experts review of the film (it’s a lot more positive). I have to commend the film (and later condemn it) for being such a faithful adaptation of the show, from pitch-perfect costumes which makes everyone look like an absurd cosplayer to the cartoonish but otherwise very accurate depictions of the Stands. Like the grotesque Titans, it would have been too easy to make the Stands look like real people and machinery but instead director Miike understands that realism was never the point, and recreates scenes wonderfully, almost too perfectly as it does give the same feeling as watching a Disney live action remake.

At the beginning of the film we’re introduced to Koichi, a major character who doesn’t have a lot to do in the movie. Diamond is Unbreakable would have actually benefitted a lot from being less faithful to its source material and instead show the story from his point of view, as an audience surrogate – at least for Chapter 1. It would have made the descent into the crazy world of Stands and mutant dad monsters much smoother and would have allowed for exposition and flashbacks that aren’t shoehorned in. As it is, Diamond is Unbreakable is a tough sell to newcomers to the franchise. It looks great, the action is a lot of fun and the cast all are clearly having a blast playing these characters. But ultimately it’s made for the fans because as a film with no other context it’s damn near impossible to understand what’s going on. Maybe you might recognise a few memes.

Verdict: JoJo’s Bizarre Adventure: Diamond is Unbreakable Chapter 1 is a strange film that is always fun, but it might not be the most inclusive to newcomers.

Overall entertainment: 6/10
Violence:  6/10
Sex: 0/10
Characters: So many, and that’s not even the half of it
Logic: Very little
Effects: Surprisingly good