“I have enough memories to cherish. I remember when you hatched. When you swam, and when you flew the skies. When I close my eyes, I can see you clearly.”

Leafie, a Hen into the Wild, is a 2011 South Korean animated film, produced by Myung Films, based off the book The Hen Who Dreamed She Could Fly by Hwang Sun-mi about Leafie, a battery farm hen who yearns of freedom. Thinking she would live better as one of the free range hens in the yard, she escapes her confines, only to be rejected by the rooster and the rest of the yard creatures and cast off into the wilderness. There she is attacked by One-Eye, a vicious weasel, and only escapes when a mysterious duck she calls Wanderer saves her. She runs into a small community of woodland creatures, led by the Mayor, Mr Otter, who finds her a home close to Wanderer.

Several chance encounters later leave her the guardian of Wanderer’s duckling, Greenie. Wanting to give it a good life, she heeds Wanderer’s advice and sets off to travel to a water glade to raise her adoptive son. Willing to make any sacrifice to ensure its safety and happiness, she endures despite the differences between them.

Leafie, a Hen into the Wild has a surprising amount of story to tell considering it’s a film about a hen raising a duckling. Interestingly, considering the title, none of it has to do with battery farming chickens. Leafie gets right down to it, setting her off on her adventure as soon as possible, dumping her on a pile of chicken corpses and having her attacked all within ten minutes. After that, the story shifts to her adjusting to life in the wild, and maybe there’s a romantic thing with Wanderer? Then he croaks after five minutes, and the focus is on her raising a duck in the glades despite not being able to swim. After that the story is about the duckling not appreciating her. And then it’s about rescuing him from getting beheaded. Also the weasel just won’t leave them alone. Then there’s some sort of Duck Olympics that Greenie has to win. And then the weasel again and oh my god the film packs a whole television season’s worth of stories into a single 90-minute film.

So it’s worth pointing out that it never feels overly short, or disjointed. Everything that happens is underlined by recurring themes of motherhood and alienation. At the beginning, Mr Otter is trying to find a place for her to live and struggles because she can neither fly nor swim. Greenie is teased or ostracised for being a duck raised by a chicken. Neither Greenie or Leafie fit into their worlds, but they have each other and it’s this heart that runs throughout the movie, and gives it life where it might otherwise falter as a standard adventure film.

And boy, it knows how to pack in the emotion. Oddly enough, the usually tragic concept of death is seen more as a simple fact of life. Leafie starts her adventure by pretending to be dead and almost being buried alive on a pile of her friends’ corpses. The Wanderer’s mate is killed by the weasel, who might be the villain, but is still a carnivore that needs to eat. Leafie tells us that shit happens, especially in the wild, but it’s how you deal with what you can control that matters. Leafie has nothing in her life except Greenie, and his safety is all that matters to her. 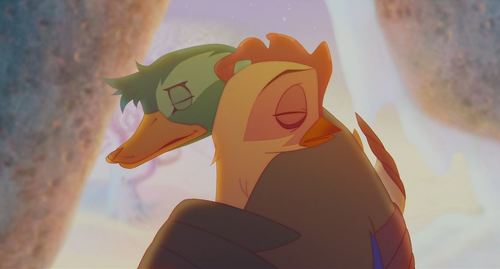 Visually, this is a gorgeous and wonderfully colourful film, benefitting from some very smooth, nicely detailed animation. The style is a mix between traditional South Korean visuals and more mass-appealing Western design. The main characters are drawn in a style reminiscent of Dreamworks or Disney characters, while some of the side characters express more Eastern design choices. Similar blends of style are see in the animation, where the animation is usually crisp and clean but changes in certain, more frenetic moments. Together with the sketchy backgrounds, the whole film looks equal parts mass-appealing and unique. 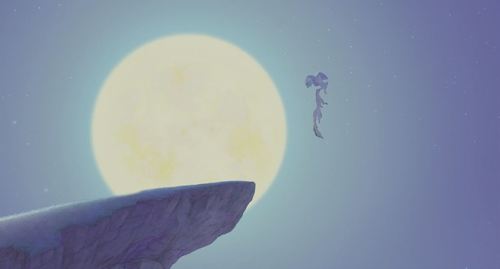 As it stands, Leafie is a great addition to South Korea’s growing animation portfolio. The characters are fun, with none of them coming off as annoying or grating, the animation is good everywhere and excellent in some places, and the story might be a bit everywhere, but it never undercuts the solidity of the theme that runs through it.

Verdict: Leafie tries to be heartfelt, funny and exciting all at once, and pretty much succeeds.