The Fantastic Adventures of Unico 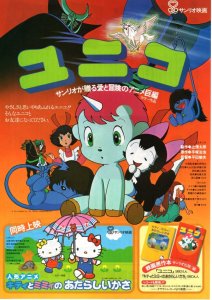 Just coming back from holiday, so this is what you’re getting.

“I was expecting something more magical than sweet potatoes.”

Osamu Tezuka was, among a lot of other things, known for his highly prolific output. In his lifetime he’s credited to having created over seven hundred different series. Some of them became widely known, like Astro Boy, Metropolis, Phoenix and Black Jack and were praised for their stories, cinematic visuals and vast array of colourful characters. He also created Unico.

Originally a manga, and then a failed pilot, The Fantastic Adventures of Unico centres around the titular Unico, a unicorn (surprise, surprise) with the ability to bring joy into the lives of everybody he meets. The gods call upon the Night Wind to capture Unico. The kind West Wind however, knows of this and takes him away somewhere the Night Wind won’t be able to find him. To protect him from the gods and the Night Wind, the West Wind knows she must transport Unico away from place to place. The first place he lands is at the Edge of the World, where he meets Beezle, the Demon of Solitude, who is loud, and abrasive but is also just looking for somebody to hang out with. The two become good friends but before long, the Night Wind finds Unico and he has to disappear.

Next, he meets Katy (or Chao), a kitten who dreams of becoming a human witch. They find an old lady living alone in the woods and Unico decides to turn Katy into a human (which is one of his powers now) to help the elderly lady out. However, when Katy becomes enchanted by the mysterious Baron De Ghost (aka Danshaku), who takes Katy prisoner, Unico decides to help her out. And then the Baron turns into a demon monster and Beezle shows up to fight. The end. 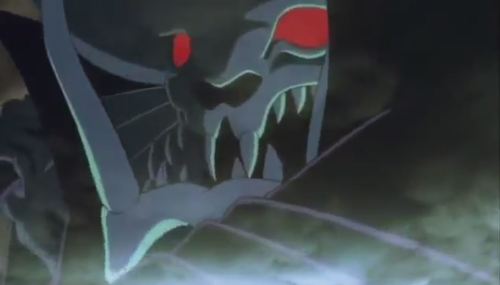 As you might guess from that synopsis, there isn’t a lot substance to a Unico film. There are really two elements to consider here: is the animation any good? And just how cute is it? Let’s talk about the latter point first. Unico is adorable from its first syrupy piece of dialogue to its final cutesy song. Let’s give everyone involved some credit: they worked so hard in making it just the most adorable thing, and it pays off. From the little scampering animation to his big bug eyes, to the sing-song voice actress, they clearly had a sort of “d’aww” checklist, and marked everything off. Twice.

However, all this focus on making the cutest sort-of-horse around means that something has to suffer, and it sure as hell isn’t going to be the art. Instead, it’s the plot, which goes nowhere and is asinine from beginning to end. It’s obvious that this was supposed to be a TV show, based on the episodic nature of this film. Nothing links, which at least means you don’t have to concentrate on anything for very long. It also means that by the time you get yourself a bit invested in whatever’s happening, they’ve moved on to something else.

There’s really only one cool moment, and that’s when the Baron transforms into this hellbeast and battles Unico, who transforms into the silliest-looking but also most gorgeous looking horse-thing ever put to film. Whereas original recipe Unico looks like a teddy bear, this one looks like it was drawn by anime horse fetishists. Maybe it was. The sequence takes up the last portion of the film (which just sort of ends afterwards), and is at least entertaining enough that it doesn’t leave a bad taste in the mouth.

The whole thing is hardly recommendable. There’s little consistency to Unico’s powers and none of it matters because after every adventure he’s just whisked away somewhere else anyway. It teaches nothing valuable to kids and leaves little to be desired for adults. But, for what it’s worth, it doesn’t give any bad lessons, and is so harmless that no one would object to sticking their kids in front of it.  A few of you will like it, based entirely on its cute factor – which gets to such a high point that the horror battle at the end is a welcome change of pace – but for everyone else, it’s worth a miss. Tezuka has hundreds of other things you can be checking out.

Verdict: This is fine if you’re in serious need of an injection of cuteness, or if you’re about 5 years old 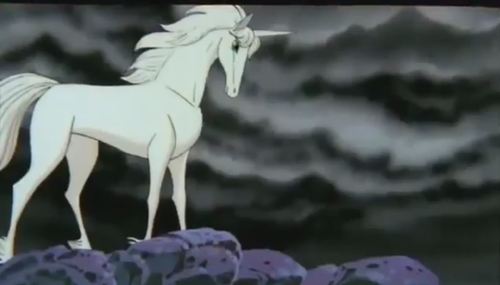 The Fantastic Adventures of Unico (1980)
Also known as: ユニコ (Unico)