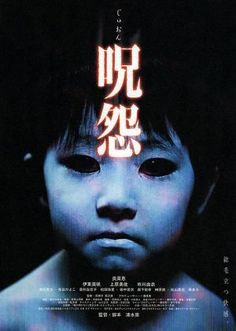 Some good scares are not enough to save a confusing, repetitive story

“Ju-on: The curse of one who dies in the grip of powerful rage.It gathers and takes effect in the places that person was alive. Those who encounter it die, and a new curse is born.”

When people talk J-Horror, they are almost invariably talking about what I refer to as the Big Three: Ringu, Ju-on: The Grudge, and – perhaps less commonly – Dark Water. Along with One Missed Called, Pulse and occasionally Audition, these are the movies from Japan’s horror scene that have had the biggest influence and impact on Western audiences (the fact that five of the six films I’ve listed here have been remade in English may have something to do with this). Ringu, as I mentioned in my review wasn’t half-bad, if only a victim of its own popularity; and Dark Water is a genuinely good, legitimately frightening film. And Ju-on, which I’m just going to refer to as The Grudge from now on? Well … 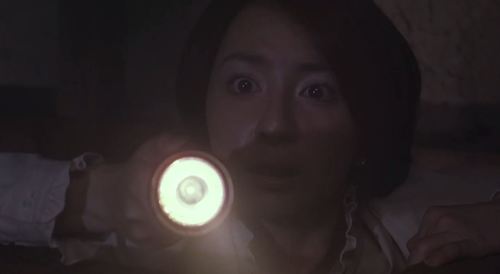 The movie focuses on Rika (Megumi Okina), a welfare worker who is tasked with looking into Sachie Tokunaga (Chikako Isomura), an elderly woman living with her son and daughter-in-law. The house, she sees, is in a state, and the old woman is distressed. No one is home, except Rika can hear sounds from upstairs, where she finds, sealed in a closet (never explained why this was duct-taped), a young boy called Toshio (Yuya Ozeki). He’s a ghost, as you can guess, you know, the one on all the promotional stuff? Anyway, back downstairs, the old woman is attacked by another ghost – Kayako (Takako Fuji) and Rika faints and …

Now we jump back a couple days and we’re with the Tokunaga family, except that lasts for about two minutes (spoilers, they all die). Now we’re with the Tokunaga sister, and she dies pretty quickly as well. Hey, some cops are investigating now. Hey, they’re dead too. And Rika’s alive? That’s weird. Who’s this schoolgirl the film is suddenly all about? Oh, it’s the older version of the little girl from five minutes ago … how much time just passed between segments? Why is all the cellphone technology still the same, then?

Good grief. The Grudge absolutely loves jumping from story to story, which makes for an interesting Fables-esque narrative construct but an impossible movie to get stuck into. Once the central premise kicks in, it becomes apparent that whoever you’re looking at on screen is probably going to die in seconds, which not only removes any semblance of caring that you once had for the person, but it also kills any tension. It’s a half-dozen instances of pretty much the exact same thing happening over and over again.  I’ve often spoken out in favour of experimentation in film. Open endings, nonlinear storytelling and unclear character motivations can be excellent allies, especially when your goal is to unsettle the audience. But this is just a mess.

The Grudge isn’t telling a particularly complicated story, so its stylistic choices work well, to an extent. While each vignette is pretty cool if wholly predictable, the thread holding it together is incredibly weak. The concept of a cursed house affecting all who enter is interesting, but you can’t tell six separate stories about it. Cursed houses tend to have only have two modes: killing people, and killing people slowly. So in order to switch it up, people die in different ways but then that raises the question of why are the ghosts so inconsistent in their methods?

Maybe some of the confusion stems from the fact that this feature is actually the third in a stunningly-long series, with the twelfth in the franchise set to be released in a couple of weeks. How they managed to get so much material out of this is beyond me. It’s an OK story, sure, but there was hardly enough meat there for its 90 minutes. And of course you’re left with all the questions. Why was the house in such a state at the beginning? Why was Rika never killed? Why did none of the CSIs at the house get Grudged-up? Why do both ghosts like the peek-a-boo game so damn much? For every predictable answer, several unanswerable questions crop up to the point where it becomes frustrating to watch. There’s only so much a few lines of text at the beginning can tell you.

I don’t want to be entirely too harsh with The Grudge because it is a fun movie to put on with other people, and talk about. Director Takashi Shimizu has a great eye for creepy visuals and loves to let the short-term tension build. The jump scares are few and far between, and instead the film is filled with dread, and a sense of unease. During some of the more mysterious moments, it’s easy to find yourself drawn into the slow-burning plot, which is more than I can for a lot of films in the genre. The fact that I wanted to know more, and be invested is a credit to this movie. It’s a shame that the execution is so all over the place.

Like Ringu, The Grudge is also a victim of its own popularity, but while the former seemed earned, as a sleeper hit of midnight screenings, the latter’s iconic status is a bit more of a mystery. I liken it to Friday the 13th in that regard, and with the upcoming Sadako vs Kayako, maybe this isn’t such a bad comparison.

Verdict: Decidedly ‘meh’, Ju-on has enough to keep people watching, but not enough to recommend

One thought on “Ju-on: The Grudge”