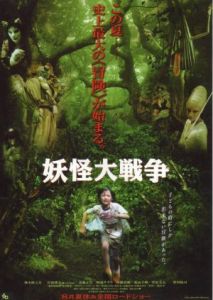 I’ve always been fascinated by world mythology. Fairy tales and legends are a great window into the soul of a culture, and what better way for a foreigner looking to experience this, in the most accessible way, than through film? The Great Yokai War makes a good entry-level course into Japanese lore.

The film focuses on Tadashi Ino (Ryunosuke Kamiki), a young boy who moves to a small town with his mother (Kaho Minami) and grandfather (Bunta Sugawara), following his parents’ divorce. Having trouble fitting in, he is bullied at school. At a local festival, he is chosen as the new “Kirin rider”, who is destined to protect everything good.

However, he quickly learns how literal his new job is when he discovers the hard way that yokai – Japanese folklorish spirits – are being taken by a mysterious man named Yasunori Kato (Etsushi Toyokawa), and his assistant Agi (Chiyaki Kuriyama) and turned into hybrid machine monsters. Thrown headfirst into this new world, he teams up with a kappa, a shoujou, a water spirit and several other yokai, in order to protect his village, the yokai, and the rest of the world. 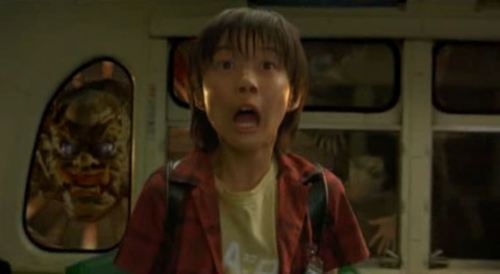 One of the strongest aspects of this film is how rich in mythology it is. This is largely due to the already extensive and plentiful nature of Japanese mythology, but also due to Miike’s careful moments of exposition and world-building. The movie is filled to the brim with yokai of every shape and size from beginning to end. Most of them appear only once, but all of them help showcase the scope of this hidden world. There isn’t a lot of backstory to many of these characters but the ones that do are rather teased than outright explained, which leaves you wanting more. It was hard to find information on Kuriyama’s character Agi, and whether she’s entirely an invention of Miike’s, and harder still to find anything about the water spirit Kawahime, both of which had stories I’d like to see expanded upon. 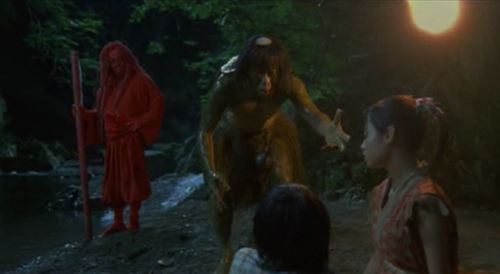 You don’t need much knowledge of yokai, or know what a kirin is in order to follow along with the story as everything you need to know is explained as the plot moves along. But to those perhaps less familiar with the world of yokai, Miike’s movie makes for a great jumping off point for further research. With countless spirits on screen at any point, you could be stuck looking at Toriyama Sekien’s famous yokai illustrations for hours after. I practically fell down a rabbit hole of information when I tried to research the movie for this review, but maybe this is largely due to the confusion regarding the main villain.

Etsushi Toyokawa’s Yasunori Kato is the primary villain of the story. He’s given a backstory in the movie as being a man-turned-Oni who was created as a result of over-discarding by the Japanese people (of both physical items and their culture). This is pretty solid as far as any villain origins go, but to anyone familiar with Japanese literature and cinema (or Street Fighter), he’s the main villain in a trilogy of books titled Teito Monogatari – and also the man that M Bison (or Vega, god Street Fighter is confusing) was modelled off. Kato there is also an Oni, but whose history is tied down to Japan’s complex history. This is what I mean when I say you can fall down the rabbit hole.

What’s interesting is that The Great Yokai War doesn’t tie into this Teito Monogatari series at all. Kato isn’t a centuries-old folklore character like everyone else in the film. It would like making a film unrelated to Harry Potter, but with Voldemort as the main villain. Still, for the purposes that it serves, Toyokawa’s portrayal of the villain is surprisingly subdued for a Miike film, and works quite nicely. I actually found the whole cast to be a lot of fun, with everyone managing to bring their yokai to life. Chikai Kuriyama is always entertaining, and this is no exception. Ryunosuke Kamiki stands out in the lead role as convincing and likeable, even when having to act alongside CG creations.

And boy, let’s talk about that. The CGI in this film is pretty bad. This is most evident in the scenes featuring Kato and his machine monsters, none of which were done with practical effects. The end result is a bunch of scenes that are, in their greyness and metallic ugliness, unappealing to look at, made even worse by the fact that none of the CG is remotely believable. And this is a shame because on the yokai side, with a couple of exceptions, all of the spirits are done with makeup and puppets. Sure everyone either looks like a person in makeup or a stiff, lifeless doll (and in the case of Sunekosuri, just a stuffed toy someone’s moving around), but that has a sort of Doctor Who charm to it. And at least it looks as bad as it’s ever going to. Add to the fact that the visual creativity behind the hundreds of yokai we see, it’s a bit of a bummer when he have to look at the generic robotic murder machines.

The Great Yokai War is a lot of fun, with good stuff that outweighs the bad by a fair margin. The characters are cool, the story is a bit on the generic side but that doesn’t mean it’s bad, and all the yokai look great on screen. It has a few weird moments and certainly more than one case of god-awful CGI, but it’s not enough to take away from the overall enjoyment. It’s Miike through and through, but much more accessible.

Verdict: It’s goofy and full of nonsense, but The Great Yokai War has enough pleasing moments and amusing characters to be worth a watch.

Movies like this: Tokyo: The Last Megalopolis introduces the villain Kato.
Anime series GeGeGe no Kitaro centres around a young boy and yokai.
Most of Takashi Miike’s kids films (Yatterman, Ninja Kids!) are similar in tone.