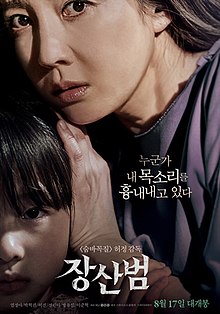 “When you hear dead people’s voices, it is nearby.”
“It?”

A dark night: a single car drives up a lonely mountain road. Suddenly a dog hits the car, and we discover that the in the boot is a woman, tied up. The driver pulls up to a walled-in cave, and begins taking it apart, in order to seal up the woman. In this moment of evil, something seems to escape from the wall. Something that can mimic the sounds of those deceased. That seems pretty scary, and it’s a decent start to any horror movie. But what makes a horror movie? This is the question I found myself asking a fair bit during this film.  Let’s take a look:

The Mimic stars Yum Jung-ah as Hee-yeon, a woman who along with her family, moves up to Mount Jang, to help her ailing mother. Hee-yeon and her husband Min-ho (Park Hyuk-kwon) are still mourning the loss of their son who vanished some years earlier. Still, they have their daughter and things seem to be going well. However, they seem to be hearing the voice of their lost son everywhere, and when they discover the body of a woman in the cave, that’s when things really start to go nuts.

They stumble upon a lost little girl (Shin Rin-ah) in the forest, who claims to have the same name as their daughter. They take the girl home, as she apparently has no parents, but is there more to her than meets the eye? Why does she sound so similar to their daughter? Could it possibly be a … mimic of some sort? Was this movie scary at all?

OK, let’s answer that first question. It’s no. Instead, the film focuses on the characters, their pasts and their interactions with one another. It’s more a character-driven thriller than it is a horror. This isn’t necessarily a bad thing. Director Huh knows this too but tries his hardest to make The Mimic a real horror film, ultimately resulting in a bunch of jump scares where they don’t belong. It’s supernatural, definitely, but I don’t think that automatically makes it a horror. I was startled during the scares, not actually spooked.

As a supernatural thriller, it’s actually pretty decent. It’s based extremely loosely on a Korean folk story, and there’s a tonne of intriguing lore and history here, which I would love to know more about. The premise is extremely fun, as is the idea that people subjected to the Jangsanbeom go slowly blind, rendering them completely at its mercy. Beneath the surface of silly scares is a well thought out film about what people are willing to believe to help them get over grief. They say the mimic enchants those who hear it, but it’s really just finding their weaknesses and exploiting them for all they’re worth.

So the good definitely outweighs the bad. The cast, for example, is excellent and everyone does a fantastic job in their roles. And as good as Yum Jung-ah is in the lead role, I have to commend Shin Rin-ah for her slightly creepy portrayal of the mysterious little girl. At seven, she’s showing a tonne of promise. The Mimic is mostly a solid film with a great atmosphere, but can’t shake the fact that as a horror film not enough happens and there are very few scares to be found.  There’s probably better films to see this Halloween, but chances are you’ll find something to like here.