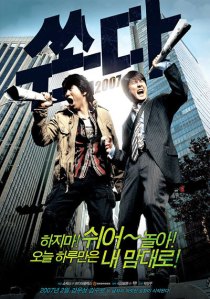 Why do we have laws? Why are we happy to be governed by a seemingly endless, almost arbitrary list of rules and manners telling us how to behave? If you’re looking at Korean action comedy Big Bang to answer those questions, you’re really doing something weird. But that’s kind of a good thing. It centres on Man-soo (Kam Woo-sung), a man who has spent his life living by a strict policy to always follow the rules. One day, his wife (Moon Jung-hee) informs him she’s leaving. It just so happens that it’s the same day that he’s let go from his government job, where he is completely disrespected.

He gets drunk and decides, just for one night, that he’s going to screw the rules and begins kicking signs and swearing at strangers, until he is finally arrested for public urination by the ardent Officer Ma (Kang Sung-jin). At the station, he meets career criminal Chul-gon (Kim Su-ro) and after some shenanigans, the two escape while stealing a gun and a cop car. As things go from bad to worse, with their potential sentences growing more and more severe, and with Ma hot on their trail, the two escape into Seoul for a crazy night of no-holds-barred lunacy.

What makes Big Bang work over, say other movies in its vein, is that it never once takes itself all that seriously (give or take a couple of solid moments of gravity). It’s loaded with jokes, both in-your face and subtle (such as seeing the two main characters take a breather on a lawn, as the camera pans up from a Don’t Step on the Grass sign). Moments like this help remind us that this is a comedy above all: This is what I mean about the film not answering those sorts of questions. The pendulum never swings too far into any particular opinion, instead putting its efforts into making us like the characters enough where you actually want Man-soo to get off scot free.

Of course, this isn’t Looney Tunes. You can’t spend an evening going apeshit without consequences and Big Bang isn’t afraid to go to some pretty dark places, so this means that the film won’t be to everyone’s tastes. Personally, I think the movie never goes to such a dark place that it feels mean-spirited at any point. Writer-director Park Jung-woo makes sure that Man-soo and his partner-in-crime are kept likeable throughout and that his outbursts are both justified but also not without corollary. Having charismatic actors like Kam Woo-sung and Kim Su-ro in the leads helps greatly here and it’s not difficult to see how unbearable the movie could have been, with only the slightest misstep.

Perhaps the film’s biggest mistake is how they treat Man-soo’s soon-to-be-ex-wife Kyung-soon who comes across as one-dimensional and only there to be a thorn in Man-soo’s side. This sort of characterisation is fine with his co-workers (whose collective shrug regarding Man-soo’s existence and farewell party is pretty funny), but there’s nothing in Kyung-soon that suggests they ever had any kind of loving marriage. Not every joke in this film works, and it seems that a lot of those are in scenes she is involved in. Kyung-soon had the potential to be the film’s perspective of sanity, who only seems awful to Man-soo, but it’s not an angle that’s well established, unfortunately.

As for the rest of the cast of characters, there’s good comedy to be found in how over the top the cops keep treating Man-soo’s rampage, going as far as creating a narrative focusing on made-up riotous student days which he spent planning acts of terror, with one wonderful scene involving Inspector Ma describing how dangerous he and Chul-gon are, which smash-cuts to the two of them splashing around in a fountain. The film goes to big lengths to show us that Man-soo isn’t a danger to anyone, which is warranted in a story that can in theory get extremely dark at a moment’s notice.

In the end, Big Bang does a lot of good by giving us likeable leads, some pretty slick direction and some good jokes. The story is a bit all over the place tonally, and not all of it lands, but when it does it’s certainly entertaining. It probably won’t blow you away, but for what it is, and within its genre, it rates pretty highly.  Don’t come in expecting the world, and you won’t be disappointed coming out.