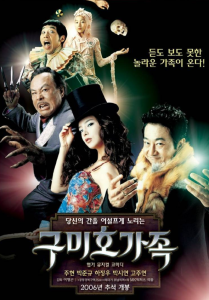 It’s some singing, some dancing in Lee Hyeong-Gon’s fantasy musical.

“Where can we find a lot of humans?”

Back when I first started looking at Asian cinema, I spent a lot of time looking at the sorts of movies that were interesting and different to Western movies. Schlock like Miike’s best works, the inventiveness of the Japanese horror scene, and the scale of Hong Kong’s crime thrillers were all fresh and exciting. When The Fox Family was released in the UK, it seemed like the perfect combination of weird characters, mythology and music. Just the sort of thing you wouldn’t find at your local cinema. So how is it?

Focusing on a family of fox spirits known as kumiho, the titular family consists of the father (Joo Hyun), eldest daughter (Park Si-yeon), son (Ha Jung-woo) and youngest daughter (Ko Joo-yeon), who have come from the mountain to Seoul in the guise of humans. Every 1,000 years they are offered the opportunity to become humans, but have to eat the liver of a person to do so. Thus, disguised as circus performers, they arrive, on the hunt for suitable sacrifices.

Meanwhile, con artist and sleazebag Gi-dong (Park Jun-gyu) is on the run from some debt collectors, and stumbles into the circus. The eldest daughter, seeing her opportunity, seduces him. However, the next day, she accidentally reveals her true nature to Gi-dong, and the family decide to hold him against his will until the night of their feasting. Gi-dong attempts to endear himself to the family by helping them find more sacrifices, but things take a turn for the worst when a series of murders implements the fox family, and a crazed detective (Park Chul-min) has it in for them. Also there are songs.

The reason I bring up this general hype about the film is because I think a lot of people going into Fox Family are probably going to want something that feels like a Henry Sellick film, or even The Happiness of the Katakuris. Problem is that this really isn’t it. The music is generally pretty decent, but provides very little in terms of catchy songs and earworms. Scattered throughout the film and playing every fifteen minutes or so, the songs in the movie don’t really feel like they belong sometimes. It’s like no one involved wanted to really commit to the idea of having big show-stopping numbers, and so we’re left with a film that moves along fine until an out-of-nowhere tunes appears and you realise you’ve forgotten it was a musical. The Fox Family should have gone bigger and bolder with its theatrics. The middle ground feels a bit underwhelming.

In fact, that’s where the majority of my complaints towards the film lies. The Fox Family seems pretty afraid to actually step up and deliver something truly fantastic or weird. It wants that Tim Burton set design, and the Rocky Horror-style numbers but lacks a confidence that would make what is a pretty decent movie into a must-watch. There’s one strong musical number, during the scenes when the family recruits people for the circus, followed by a great dance-off between cops and protestors. After that, the songs feel tacked on and lazy. Hell, they don’t even have a big climactic tune to mark the tensest moments right at the end of the film. There’s a great chase sequence with most of the characters on a moped, and it would have been the perfect time for a big number featuring everyone.

Thankfully, a lot of the rest of the film works really nicely. The family share a strong chemistry, and the script understands the motivation behind the foxes’ desires to become human. The family grows during the course of the adventure, and become wise to what it means to be human. It’s not often said directly, either – except in one scene featuring the father – so we get to see this growth happen naturally. The father is, surprisingly, the heart of the entire thing although his children do get their own share of good moments, too. Throw in their interactions with the humans – especially Gi-dong who is equally interesting – and you have what is a pretty compelling fantasy comedy.

With Lee’s direction on point during the majority of the runtime, The Fox Family doesn’t do anything wrong, it just never really does anything amazingly either. While it’s hardly a masterpiece, it’s definitely a strong enough picture to be worth a watch, especially if you’re looking for something a little bit different. I went looking for a weird, foreign language fantasy musical and got one. It’s a shame it never quite reaches the heights it could, and feels like a lot of missed opportunities. It has the potential to become a true cult classic, if only it let itself sink its teeth into its subject matter.

Verdict: Better than it could have been but not as good as it should have been, The Fox Family is no masterpiece, but it’s still worth checking out.