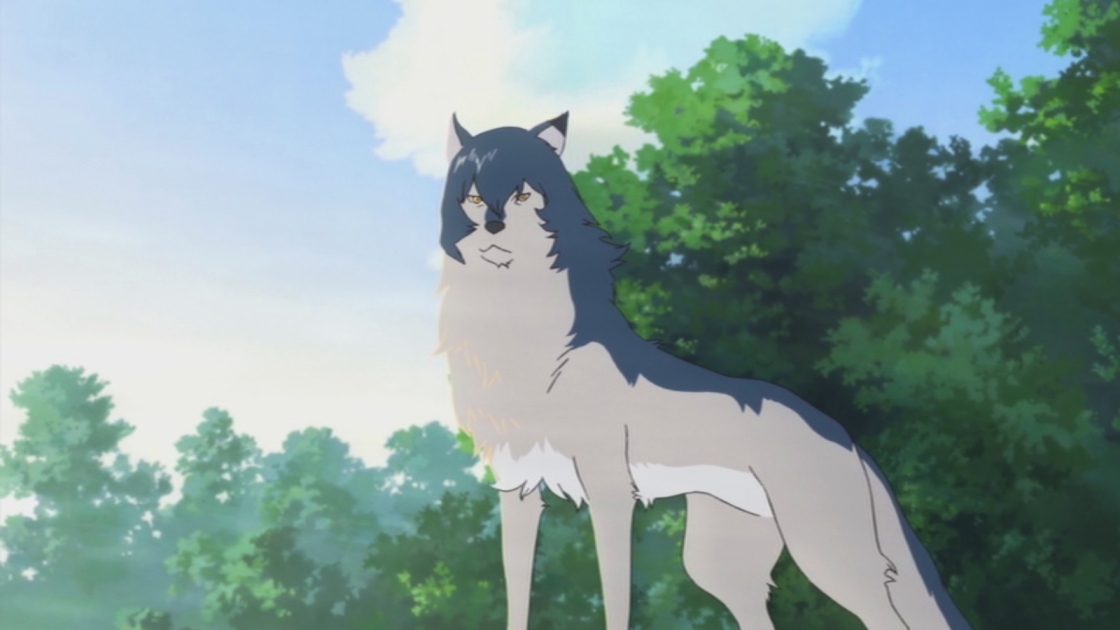 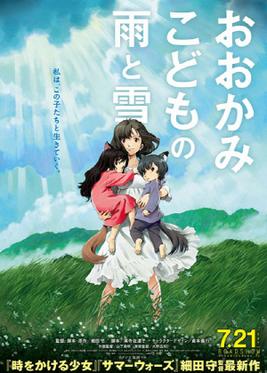 “Why is the wolf always the bad guy?”
“You mean, in the picture books?”
Everyone hates them, and they’re always killed in the end… If that’s the case, I don’t want to be a wolf.”
“You’re right. But you know, Mommy likes wolves.”

There’s a real sense of identity crisis within the pages of Satoko Okudera and Mamoru Hosoda’s screenplay for Wolf Children. Not in the sense that the film doesn’t know what it wants to be – far from it – but rather, it’s one of the running themes of this strange, touching drama. The mother in the quote above is Hana, a university student who meets a young man and falls in love with him. He reveals himself to be a Wolf Man (his character is not given a name), and two live a great life together, and have two children.

Things take a turn for the worse, though, when Wolf Man dies suddenly, leaving Hana alone with the half-wolf kids: Yuki, the older daughter and Ame, the younger son. Hana keeps the kids away from other children, but when life in the city proves to be too much for her to handle, she travels to the countryside, where her children can transform safely into wolves, and begins to adapt to life there. From there, the movie develops in a few obvious ways and we see how Hana and the family grow accustomed to living in the middle of nowhere, as well as the issues that come with raising a family of half-wolves.

Wolf Children is strangely hard to categorise as a film. It’s a drama about the trials and tribulations that come from attempting to raise two children as a single mother, but it’s also a fantasy film about a woman who sleeps with a werewolf. What’s great is just how well the two elements combine. Much like 2007’s Summer Days with Coo, the film plays its premise perfectly straight and then uses its subject matter as a tool for crafting excellent visual metaphors about its main characters. 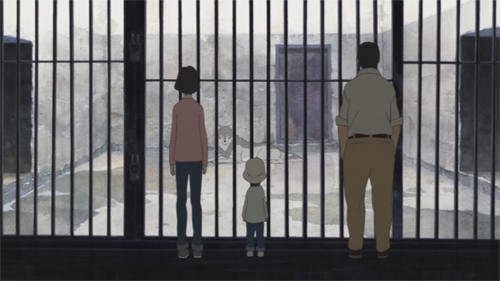 Hana is a solid lead, but unfortunately is nothing particularly special. She’s interesting enough to hold our attention for a while: after all, she doesn’t skip a beat to get the Wolf Man into bed after he shows her his wolf form. And then she sleeps with him as he’s still a wolf. She gets points for kinkiness, but once Wolfy’s gone, so does a lot of her personality, becoming almost entirely reactionary to both the world at large, and her children specifically. It’s the titular wolf children who are the real stars here, and whose journeys are ultimately the most touching.

Ame and Yuki are endlessly fascinating to watch. Wolf Children spends the second half of its running time on their arcs, the way they grow and how their experiences shape them as they age. Ame’s increasingly distant relationship with his human side, as well as Yuki’s desire to fit in with people at school (and her eventual romance with new kid Souhei), are fantasy reflections of a child’s typical desire to belong, or have strong role models. Wolf Children is great when it takes what would make for an otherwise standard movie and makes it fantastic. The gentle writing gives these moments time to breathe, as well, and the result is a film that never tries to go too far, instead satisfied with smaller, intimate and rather sweet moments.

That said, Wolf Children’s worst attribute is its predictability in spite of its interesting premise. The story never really goes in any particularly weird direction, except perhaps with Ame, and even then it’s fairly easy to figure out just what the next story beat is going to be. In a way, it plays out a lot like a fairy tale – a comparison expressed by Hana within the film – and contains a lot of the story bumps along the way. It makes for pleasant but not particularly challenging viewing. Ultimately, this is a film that knows how to pull at the right emotions and tells a very compelling and extremely warm-hearted story, even if it is a bit samey.

Verdict: Adding fantasy elements only emphasises the humanity present, and Wolf Children is a stronger film for it.

Overall entertainment: 7.5/10
Violence: 5/10
Sex: Some good old fashioned wolf-bonin’
Sexy wolves: And a thousand furries were born
Ages: There is no way Ame is ten at the end of the film. Kid looks about 14.
Jokes: Hana not knowing whether to take her kids to the paediatrician or the vet is a good one.