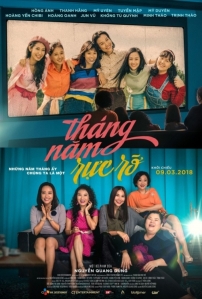 “The wild horses’ hooves crushing,
The vast green grass in the horizon,
The wild horses galloping like crazy on the field, in the thunderstorm.”

People lose touch. It’s normal, and happens to even the closest of friends. After all, one can’t expect to stay with the same friends forever, despite the naïve promises said amongst kids. Sometimes, though, the past makes its way back into your life in such a way that you can do nothing but watch as a past world comes flooding back: friends, old flames, dreams. This happens to Hieu Phuong (Hong Anh), happily married, wealthy woman who is generally content in life. After learning that one of her best friends from high school, Dung (Thanh Hang), is terminally ill, she sets out to reunite the rest of their high school clique, the Wild Horses.

The film spends most of its runtime in the 70s, when a young Hieu (Hoang Yen Chibi) moves from the country to the city, and struggles to make friends. It’s then that she’s introduced to tomboy Dung (Hoanh Oanh), and the rest of the gang: wannabe star Bao Chau (Khong Yu Quynh), ice cold beauty Anh (Jun Vu), foulmouth Linh (Trinh Thao), and funny fat one Chi (Minh Thao). As the women slowly find one another again, they reminisce about the good old days, while wondering what their past selves would have thought about their lives now.

What I like the most about Go Go Sisters is that it never tries to be more than it is. It’s a low-key film that uses its flashback premise really well, and gives us characters who you love to watch. I haven’t seen Summer, the 2011 Korean film this was based off, or any of the countless remakes, so I don’t know how much of its charm it borrowed from the original but what it does with its new setting makes it very much its own film. Set against a backdrop of a politically-tumultuous Da Lat, the flashback sequences give us a more vibrant, exciting setting which represents Hieu and the gang’s wide-eyed naivety. The colour palette is distinctly 70s, awash in browns, oranges and denim jackets and the city is buzzing with life and catchy-as-hell music. With most of the action taking place here, it makes sense that it is the more visually appealing part of the film. It’s a world of endless possibilities for the girls, filled with fights, love and impromptu dance numbers.

Frankly, it’s a shame that it ever has to cut back to the year 2000, where everything is much bluer and washed out. The scenes of the girls reminiscing, and finding each other again are wonderful, though, and give narrative importance and a lot of poignancy to the flashbacks. The film could easily have cut out all of the scenes involving Hieu’s daughter, as their purpose is singular: to provide us with convenient segue into a similar situation Hieu got into when she was a girl. No, wait – there is one time when the daughter c-story is genuinely great: when the Wild Horses team up to beat up Hieu’s daughter’s bullies. It’s an excellent scene that would never have made it in a Hollywood comedy, except in some lesser Melissa McCarthy film – and even then it would have been played too much for laughs. Here, it’s funny, but it’s also pretty genuine. That they only get a slap on the wrist from the police for effectively assaulting a group of minors is hilariously surprising.

The six girls in the flashbacks have such excellent chemistry together that you can’t help but feel a sense of joy watching them spend time together, so it’s naturally sad when they inevitably go their separate ways, not to speak to one another for a quarter of a century. Sure, it can get a bit saccharine at times, especially at the end when everything just sort of perfectly comes together, but the film isn’t trying to kid anyone here. That was always the intention, and was never going to build up to anything different. You don’t go into a movie like this and expect something else. It’s a feel-good film through and through and would never wish you to think otherwise.

Verdict: By keeping things mostly light, Go Go Sisters will likely leave you with a warm feeling and a smile on your face.