“Come back to your old self.”

Bleak Night tells the story of three best friends: Ki-tae (Lee Je-hoon), Hae-joon “Becky” (Park Jung-min), and Dong-yoon (Seo Jun-young), in multiple points in time over two years. In the present day, Ki-tae’s father (Jo Sung-ha) tracks down Becky and Dong-yoon in order to better understand his estranged son’s death. Despite having been close in high school, Becky transferred to another school, and Dong-yoon dropped out, not long before Ki-tae’s suicide.

Through flashbacks, we’re told the story of the cracks in trust that occurred bertween the three friends, and how Ki-tae’s troubled life and desire to be loved by everyone leads him to become a bully, especially to Becky. We see the events that transpired to drive him to suicide as we understand each character’s motivations and backgrounds. The film unfolds in a nonlinear fashion, revealing crucial plot moments as characters answer the father’s questions or reminisce, lamenting on their history.

The first thing to mention about Bleak Night is that its title is awfully fitting. It is not a cheerful movie in the slightest, and never once pretends to be. Each character (except maybe Dong-yoon) comes loaded with baggage, and it’s how they deal with it – if at all – that affects their relationships with each other, resulting in fractured friendships or outright hatred. The film works as both as a commentary on the way teenage boys communicate and as an in-depth character study of a group of people so insecure in themselves that they’re willing to hurt each other to defend their pride.

Bleak Night’s themes are not unique to South Korea, either. The notion that boys – and men – are more often than not reluctant to talk about their feelings, instead resorting to petty acts that big them up is a common one around the world. A boy who uses refuses to talk about a rough home life, even to his closest friends, is definitely prone to the sort of actions that tears the three friends apart. Ki-tae’s turnaround, from loving friend to total douche, is justified in the context of the movie especially as he grows in popularity, but it doesn’t make it right nor is it any less hard to watch. 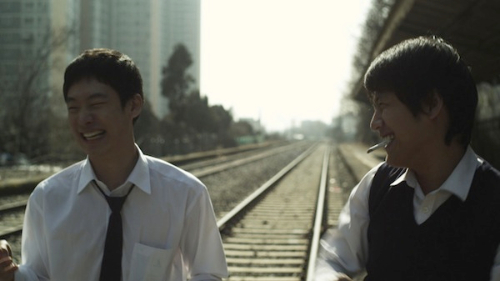 I have to give props to Lee Je-hoon who plays the main character. His ability to switch from the loveable guy we see early on to the ruthless, broken bully he becomes is masterful. He is able to convey all the sides of his character through subtle facial cues and delivery styles, and is largely the reason Ki-tae is seen as such a deep character. A lesser actor could have easily made the role too black-and-white. Still, he isn’t the only one who deserves credit for their work. The entire cast is pretty excellent all around, able to show us growth of their characters even in a disjointed story like this one.

The film is at its strongest when it shows us the contrast between the boys in high school, and the following year, now split from each other. They act older, jaded and full of regret for the events that transpired in the past. If Bleak Night has a weakness, it’s in the father character, who really doesn’t do a hell of a lot. Introduced at the start of the film, his role is largely to bring the audience up to speed with who everyone is, and what the current circumstances are. Once we get to know Ki-tae, Becky and Dong-joon, the father becomes redundant, right up until the end, when Dong-joon finally interacts with him. It’s a killer couple of scenes that leads to a heart-wrenching finale, and it’s bound to leave you completely broken.

Verdict: As heavy as the heart it bears, Bleak Night is not a fun film but it’s excellent in every respect.