Have you ever had one of those nights, where everything just comes together? The sort evening where strangers pop in and out of your circle, where seemingly random events bring them back in like the tide, and where everything just sort of happens for seemingly no reason other than sheer coincidence of random chance? The experience is wholly unique, and is one that has to be lived to be actually understood. Listening to someone’s story about that night they had can be entertaining, but it’s hard to really feel what exactly went down. Masaaki Yuasa’s film Night is Short, Walk on Girl – based on the novel by Tomikhiko Morimi – attempts to give us just that feeling.

Set over the course of one night, the film tells the story of the titular girl (a kohai, as she’s referred to) and a guy (a senpai) who desperately wants to tell her how he feels about her, despite events seemingly conspiring to keep them apart. After meeting a pervert in a bar, and punching his lights out, the kohai follows two strangers – Higuchi and Hanuki – through the city, crashing parties and encountering strange individuals. As the night draws on, she gets into a number of bizarre situations, such as besting a supernatural being in a drinking game, and becomes the lead actress for a guerrilla theatre company. Meanwhile, the senpai is doing everything in his power to gain favour with the girl, and then everyone catches a cold.

Dreamlike. That’s probably the best way to describe Night is Short, Walk on Girl. The narrative moves along at random paces, with the story having no particular end goal. Everything just flows on a stream of consciousness, as the kohai encounters more and more people, and the senpai is drawn into a madcap world of competitive chilli eating, a highly invasive student council and the god of old book markets. The kohai’s story is a lot more calm, at least comparatively speaking, and within its own logic really works in selling us the idea that we’re watching someone’s night out, described in the weird, hazy nonsensical way people tend to. 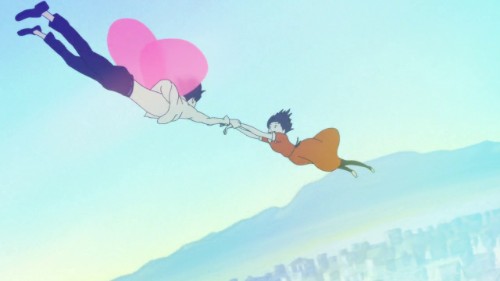 The senpai’s story is almost too zany, and often runs the risk of the ruining the foggy reality of the kohai’s plot. By focusing solely on the girl, the audience would be left to wonder if any of this was truly happening, or if it was an interpretation of an otherwise normal – if extraordinarily long despite the film’s title – night out. Still, it all comes together and probably ends up becoming more than the sum of its parts in its final few minutes. It’s right at the end that Night is Short ends up transcending its original premise, and instead presents us with a thesis on the nature of fate and coincidence. It’s a concept played with throughout the film, but it’s at the end that pieces start to come together in a way that makes the final moments satisfying in a way I wasn’t expecting.

Visually, the film uses director Masaaki Yuasa’s trademark madcap and wild style nicely. By mixing lineart with vector-style imagery, the film never feels grounded in any one reality, which plays to its strengths. It’s not something one expects from anime, especially one with such a wide release. But it’s definitely nice to see something so different to the usual Ghibli or Shinkai fare. Accompanying these wonderfully weird visuals is an excellent soundtrack from Michiru Oshima which gives the film and the often unbelievable proceedings a touch more class and life. 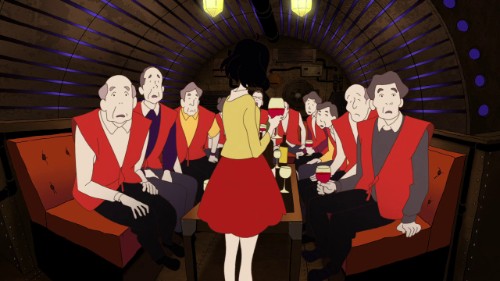 In the end, Night is Short, Walk on Girl is a bizarre little adventure that’s as interesting as its title suggests. It uses its urban fantasy setting well and uses it as a springboard to showcase the larger-than-life personalities of the relatable and likeable characters that populate it. Throw in some kooky, experimental but overall very well done animation and the result is a night out that’s made all the more fun by sharing it with the friends and weirdos you meet along the way. As someone describes the kohai – “you’re always moving forward, so no one can catch you” – and the film works the same, never quite landing at any destination. But then again, it’s all about the journey. 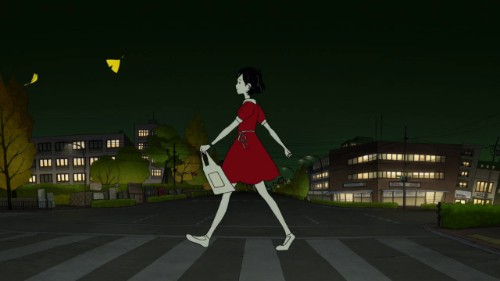 Night is Short, Walk on Girl (2017)
Also known as: 夜は短し歩けよ乙女 (Yoru wa Mijikashi Aruke yo Otome) – The night is but short, so walk on, maiden
Japanese

2 thoughts on “Night is Short, Walk on Girl”