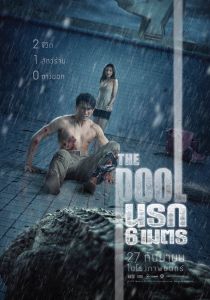 “Nobody dies by getting stuck in a pool.”

Of all of the films screening at this year’s London East Asian Film Festival, The Pool was the one I was the most curious about. All I knew was the base premise: a man finds himself trapped in an abandoned pool with a crocodile. I stayed away from trailers and synopses because I wanted to witness the events that led up to this story. Man, they were a lot goofier than I expected.

Day (Theeradej Wongpuapan) is an art director at a production company, whose team has been shooting at a massive 20-foot-deep pool. Left alone to tidy up, he falls asleep while drifting on the water, and awakens to find that the water levels have dropped too low for him to climb out. He isn’t alone, however, and he quickly finds himself in the company of his girlfriend Koy, who just jumps in (and suffers a concussion in the process), and an escaped crocodile.

The Pool opens with a disclaimer stating that no animals were harmed in the making of this production. It’s a fine statement to put in when your movie is about a man beating the shit out of a giant reptile for an hour and a half, but it’s not really necessary when your main antagonist looks like its out of a PS2 game. I don’t want to crap too much on Alternate Studio and  RiFF Animation Studio – the crocodile is never so bad as to be distracting – but for such an important part of the movie, it’s just a shame that it’s far too obvious when we’re looking at a real gator and the fake one.

OK, minor gripe over and done with – what did I actually like? Firstly, I’ll give props to director Ping Lumpraploeng, whose name I didn’t just copy-paste right now. The way he handles tension is top-notch and many of the scenes had me squirming in my seat or outright flinching. He really puts the two main characters through the wringer and you can really feel every bit of pain they go through – and it’s a lot. The Pool is a survival thriller is actually quite gripping when it isn’t being dumb.

But it does get dumb, and quite frequently. I’ve already mentioned the events that cause both characters to be trapped in the titular pool but there’s also the amount of silly coincidences (such as with the pizza guy) to consider, as well as some moments that are just plain dark for the sake of it such as a moment involving a whistle at the end that was so grim I couldn’t help but laugh. It was such a dour movie that I was convinced that everyone was just going to die, and that would be it.

But was it entertaining? Absolutely. If you want to take it very seriously, you’re probably gonna check out about halfway through, but it’s a solid enough monster film with oodles of atmosphere and a horrible claustrophobic feel. It’s as dumb as a bag of hammers and equally blunt, but I’d be lying if I said I didn’t have a hell of time with it. It’s violent, gory, nail-biting silly and pure entertainment from beginning to end – worth taking a dive and checking out.

Verdict: The Pool is a perfect accompanying piece to any Halloween film marathon.