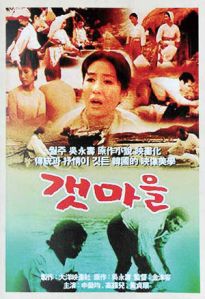 A young woman in a small village learns to deal with loss in Kim Soo-young’s drama.

The fourteenth London Korean Film Festival opened on the 1st, during an important year for the country. Celebrating 100 years since Loyal Revenge, Korea’s first ever theatrical film (of which no copies sadly survive), what better way to start than with a film by one of the world’s oldest living film directors: Kim Soo-young’s The Sea Village.

A slow moving drama, The Sea Village (one of eight films made by Kim that year) deals with a young woman name Hae-soon (Ko Eun-ah) who lives in the titular village. The men of the village often go out to fish, but frequent bad weather makes the job risky. Tragedy hits when Hae-soon’s husband doesn’t return from a trip and as she is learning to move on, a local man named Sang-soo (Shin Young-kyun) is looking to make a move on her.

Ahead of his time, director Kim explores feminist themes and toxic masculinity decades before the term existed. As the story is told primarily through the point of view of women, it allows us a chance to see how life was in the day for women, especially ones who had lost their husbands to sea: something of a metaphor for the recent Korean war, no doubt.  The cinematography is easily one of the best aspects of the picture, with a high contrasted black and white to really sell the emotions. Were treated to long lingering shots of the sea, and the surrounding wilderness in some gorgeously evocative shots. The use of shades here is excellent and sets the mood before the characters even speak.

Director Kim has said that the landscapes portrayed in the film are as important as the humans, and it’s not hard to understand what he’s talking about. The seaside village signifies a place of belonging and of community whereas the endless forest and mountain of the country inland is filled with possibility, sure, but a lot more danger.  We follow Hae-soon through her decisions to leave and ultimately return, finding solace among her friends and family, and Kim’s shooting style perfectly encapsulates it, giving us serene scenes of a blissful town – at least when there aren’t any typhoons.

The Sea Village is a slice of quaint rural life, that could just as easily have come out of the turn of the century than the 60s. Nothing in the small villages seems to have changed over the years and they represent an older, idyllic version of the country Kim grew up in, but one that is filled with inevitable tragedy. It feels nostalgic, yet realistic in the way it portrays the lives of these people. The Sea Village is a classic of Korean cinema that never goes too far, but does just enough.

Verdict: The Sea Village offers up a simple drama, grounded in a sad realism.