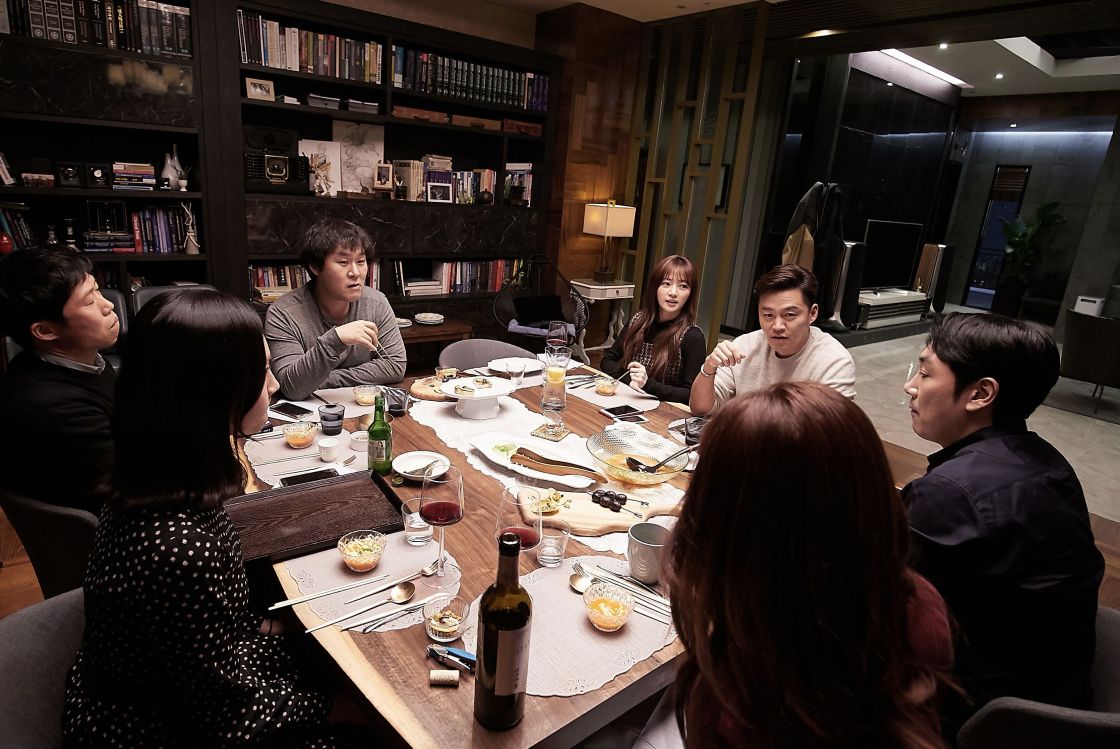 The lives of seven friends are upturned when they let their phones do the talking.

“You have something you’re hiding?”

We live three lives – a public one, a private one and a secret one. That’s the thesis put up on screen during the final few moments of Intimate Strangers, Lee Jae-kyoo’s remake – one of many since the original’s release – of Paolo Genovese’s 2016 black comedy. It posits that we’re never really who we say we are, that we mask our deepest secrets and that we mostly do this via our phones. When cosmetic surgeon Seok-ho (Cho Jin-woong) and his psychiatrist wife Ye-jin (Kim Ji-soo) host a dinner, it’s this topic that dominates the conversation.

Ye-jin proposes a game: that for the rest of the dinner, any messages received are read aloud, and calls are put on speaker. At first their guests – Tae-soo (Yoo Hae-jin) , Joon-mo (Lee Seo-jin), and their wives Soo-hyun (Yum Jung-ah) and Se-kyung (Song Ha-yoon) as well as seventh wheel Young-bae (Yoon Kyung-ho) – are keen to play, though it’s quickly apparent that was only to mask the fact that they’re terrified of something incriminating popping up during the night. And, of course, it doesn’t take long for their sins to come to light.

Intimate Strangers is a comedy, but you wouldn’t know that immediately going in. It’s shot like a thriller, and while Korean stars famously mix and match genres I still associate the majority of the cast with darker roles – especially Yum Jung-ah from whom I still get A Tale of Two Sisters vibes. But by never going too jokey, and keeping the stakes of the characters’ indiscretions high the film remains engaging and tense, like you’re waiting for the other shoe to drop and it’s this blend of tones that makes the film engaging throughout.

If you’ve seen Perfect Strangers or any of its countless other versions (Japan’s set to release one in the next couple of months) you’ll not get much new from this version. I think it might have been interesting to use the format as a way to discuss taboos in various societies, and why people are led to hide certain parts of themselves from their friends and partners. It’s not like it should have any of these things, but it could have been a nice touch. I hadn’t seen the original or any of the remakes, so everything here felt fresh (if occasionally predictable) and the somewhat generic issues at least were relatable enough, at least when everyone wasn’t being awful.

For the first half, the main characters are little more than archetypes who talk and act exactly the way you’d expect them to.  This wouldn’t be much of an issue but with the exception of Young-bae and the newly-introduced (and considerably younger) Se-kyung the rest of the group is just mean and unlikeable. It’s hard to want to be these people’s friends and want to spend time with them, at least at first. Thankfully the talented ensemble is able to make the shittiness of their roles work in their favour – it just takes a bit of time to get to that point.

But maybe that was the whole idea. After all, if these guys were good people it wouldn’t be as fun to see all of their secrets get exposed. Of course it’s a bit convenient the way everyone calls or texts the main characters in that two hour window between the game starting and the end of dinner, but without it there wouldn’t be a story. And then the ending throws another curveball at you, using the literal lunacy that a full moon supposedly brings out and a strange final few minutes that allow you to draw your own conclusions. My enjoyment of the film increased somewhat during those moments (at least after we’d made up our minds on what it all meant) and it actually helped define what the film was trying to say. Your mileage may vary depending on how you interpret the ending, but that’s kind of the fun. More fun than reading the texts I get out loud to all my friends, anyway.

Verdict: Largely carried by the talents of its cast, Intimate Strangers might never get as wicked as I wanted, but still relishes in exposing our darkest secrets.

Overall entertainment: 8/10
Violence: 2/10
Sex: 2/10
Affairs: So many affairs
MVP: Young-bae’s no-nonsense attitude
Ear-worm of the night: I Will Survive. Turn your ringtone down, man.
Men are from Mars: And women are iPhones, obviously