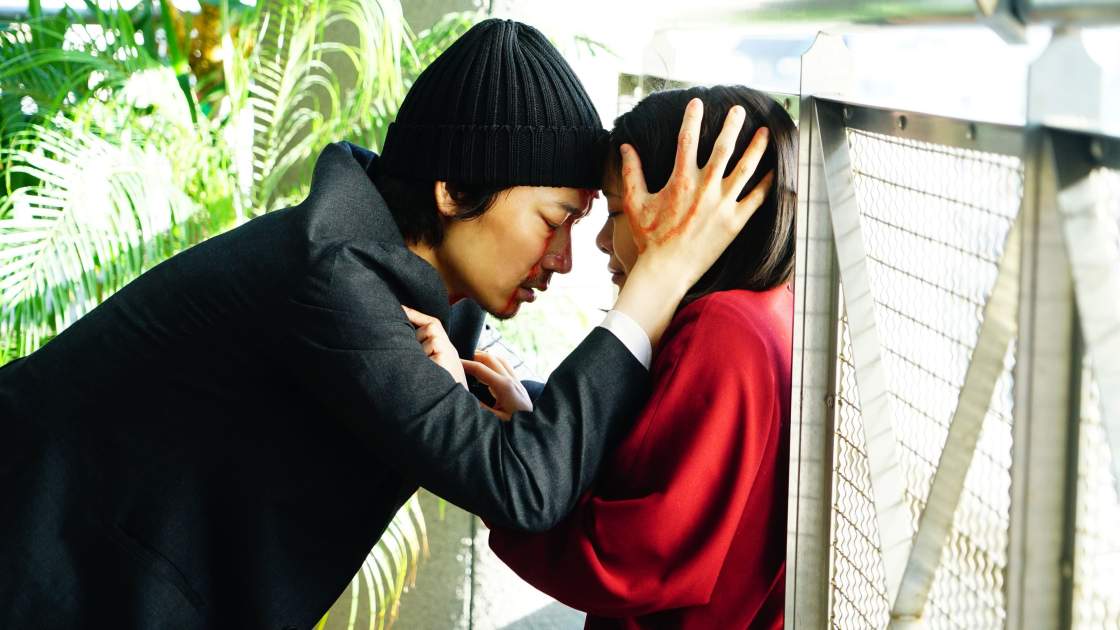 It surely shouldn’t take a fantasy psychodrama to learn that bad things happen when you drill holes in people’s heads.

“It would be boring if I explained everything.”

I want to like the films of J-Horror icon Takashi Shimizu, most famed for his four contributions to the Grudge franchise. I really do. But he makes it so hard to, you know, on account of how all his films have either bored me senseless or have just been nonsensical trash. But after having suffered through Marebito and shrugged my way through his latest film Homunculus, I’m starting to think I might have been a bit too harsh on Ju-On. Anyway, this is Homunculus.

Susumu Nakoshi (Go Ayano) is an amnesiac, and homeless. He lives in his car and spends his time amongst the guys who lives in tents down at the park, despite his obvious wealth. One evening, he encounters young research scientist Ito Manabu (Ryo Ito), who wants to use him as a guinea pig in a trepanation experiment, supposedly to unleash his brain’s full potential. Ho boy. After some convincing, he agrees to the seven day medical trial and when he wakes up after the procedure, everything seems fine. Ito invites him to dinner, where he reveals his theory: that drilling a hole in your head increases your ESP powers considerably. Susumu goes outside and discovers that by covering his left eye he sees the world filled with weird CGI nonsense – colourful characters like a mecha yakuza boss and a man with a light bulb for a head. Ito tells him that Susumu now has the ability to see people’s homunculi – a representation of their most inner selves and sources of stress.

I honestly have no idea what to make of Homunculus. The trailer, director and general feel of the movie suggests this is meant to be a horror film, but the execution, the titular homunculi and the thematic elements say otherwise. What starts out promising another Lucy-like shitfest mercifully polymorphs into something far more interesting, if a bit less coherent. As its story went on, Homunculus decided to take a more thought-provoking path, and used the potential offered by Susumu’s new power to have the main character analyse those around him and get really deep into their psyche, helping them with whatever psychological issues are manifesting themselves. This is a fun premise, and I’d have loved to see more of it.

I have to imagine that’s what the manga the movie is based off is about. The film does kind of do this, at least at first. We see him interact with the yakuza boss, and he starts to unravel the man’s past in a way that suggests that Homunculus could have been more bearable than it turned out. But these scenes are very few (two, maybe three depending on how you view his interactions with the out-of-nowhere final act character Nanako) and the rest of the movie consists entirely of build-up, an unfathomable amount of exposition, or bizarre twists that you’d be kind of hard pressed to care about.

The more I think about this film, the less I remember about it regardless of how many notes I took. It was a watchable mess for the first half or so, but really drags on as it tries to cram as many chapters of the manga in as possible while also trying to keep its odd, slow tone. The two don’t mesh. Shimizu knows how to do weird, and Homonculus is definitely weird, but he’s also not very good at telling a coherent story. Homunculus has interesting themes, ones it no doubt has borrowed from its source material, but it’s presented in a clumsy fashion that’s honestly just a touch too sloppy to be engaging.

Its biggest sin, however, is its inability to stop expositing. There are altogether too many drawn out scenes of people explaining things to each other which, one the one hand, is kind of necessary when you’re dealing with this level of pseudo-fantasy science bullshit, but ultimately makes you feel like you’re stuck in traffic, letting you believe you’re moving forward only to be ground to halt twenty seconds later. Maybe it would have been better as an animated feature, something like the works of Satoshi Kon. Anime doesn’t suffer much when it takes a pause to talk, but live-action films really do. As it is, it’s too silly-looking to be scary, too overblown to be meaningful and way too messy to be a decent standalone story. Maybe I should have watched it with my left eye closed.

Verdict: Some good ideas and decent visuals don’t help a film that is ultimately a huge bore and often feels like it’s only using 10% of its brain.