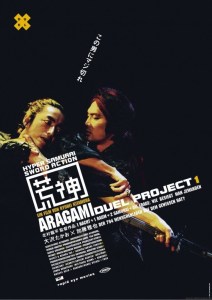 Aragami won’t win any awards for originality, but it tells a fun story and delivers on action.

“Tengu rules this mountain. He hears the drop of a pin. He sees a thousand leagues. He smells the difference between a man’s blood and a beast’s…and he eats only flesh. But Tengu is just the name that people give him. He’s really Aragami, a fury of wild violence, the Raging God of Battle.”

In 2002, producer Shinya Kawai issued a challenge to two directors – Ryuhei Kitamura (Versus, Godzilla: Final Wars, Azumi), and Yukihiko Tsutsumi (Twentieth Century Boys trilogy): see who could make the best feature film featuring: as few actors as possible, one setting, and a battle to the death. Aragmi is Ryuhei Kitamura’s entry.

Aragami (full title: Aragmi: the Raging God of Battle) is set in Feudal Japan and tells the story of a wounded Samurai, who drags himself and a companion to a remote temple, where he collapses. When he comes to, he finds his wounds are healed completely, but his friend has died. He is greeted by the mysterious man who helped him, played by Masaya Kato, who reveals he is Tengu, also known as Aragami, the Raging God of Battle. He reveals to the Samurai he has been alive for too long, but has yet to find an adversary who is better skilled at combat than he. He believes the Samurai is the one to do it.

Aragami is an idea, and a good one at that, stretched into 78 minutes – and that’s where the problems lie. The first half of the movie is establishing the scene, the world, the characters and – more importantly – the idea behind the action to come. However what could have been done in a 10 to 15 minute sequence is dragged out to 45 minutes, and in places can feel like it is dragging. You sometimes get the impression that some of the scenes have already happened.  The pacing issues are undercut, somewhat, by the performances, however. Takao Osawa and Masaya Kato sell the concept well – with Kato having a whole lot of fun as Tengu. Osawa mainly reacts, but does so with skill. If they weren’t battling to the death, they might make a very good manzai team. Rounding out the cast is Kanae Uotani, who plays a strange, silent and passive role, and spends most of the film so statuesque you tend to forget she’s in most scenes.

Ryuhei Kitamura is highly skilled at directing action sequences, and you all too often get the impression that he should have done a bit more of that. The dialogue, and the plot is engaging for sure, but you become increasingly aware that they’re just in one set, with the same two actors for all of it, and when there are only two characters talking, there are only so many ways to frame the scene. Kitamura gets through all of them in the first fifteen minutes, so you end with a film that looks pretty much the same for the majority of its running time which, for such a visually-savvy director as Kitamura, is a shame.

With that in mind, Kitamura does imbue the action scenes with all the showmanship that you expect from a resurrected samurai and an immortal warrior-spirit-goblin-swordsman (it’s never really explained in much detail) battling it out. It’s filled with little moments, such as Tengu, being well-travelled, having an assortment of weapons from all over the world available for the Samurai to use (on top of having available to drink wine and vodka). The story plays out like an old fable and certainly feels like one, and you definitely get the impression that that was the intention. Kitamura understands his subject matter, and knows not to take it too seriously. It just could have benefitted from shaving ten or fifteen minutes off.

Verdict: Kitamura is in his element directing fast-paced, close-quarter action sequences, if only the film didn’t drag in so many places.