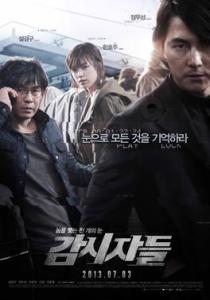 “I will not give up this pursuit even if it means hunting every corner of the world.”

In action films, surveillance scenes are often used to slow down the action and get into the human side of the story more. Maybe two vastly different cops finally take the time to get to know one another, letting the audience in on who they are and why we should care if they succeed in their mission. The characters are staked out, maybe, in a black van, outside a perp’s house at night and at best they provide a much-needed break from the fast-paced action, and at worst slow the movie down to a crawl.

In 2007, writer-director Nai-Hoi Yau made a film about this, called Eye in the Sky. But this isn’t about that film; this is about the 2013 South Korean remake Cold Eyes. This one focuses on young rookie Ha Yoon-joo (Han Hyo-joo), who joins the Korean Police Forces Special Crime Department, which specialises in surveillance. Led by Chief Hwag (Sol Kyung-gu), and Department Head Lee (Jin Kyung), the team, each member of which is given an animal-themed codename, are currently trying to track down the leader of a crime ring, known as James (Jung Woo-sung). He has been involved in several huge robberies recently but has always avoided being caught.

However, one small slipup by a gang member sets them on his trail, and a cat-and-mouse game begins between the criminals and the people trying to catch them.

Cold Eyes takes all the slow-paced sluggishness of most surveillance scenes and flips them on their head, providing us with a movie that is both engaging and exciting, a surprising feet for a film that consists of people sitting at computers analysing data, or out in the field following people on foot. The majority of the credit goes to director duo Ui-seok Jo and Byung-seo Kim, who keep the frame interesting and filled with information, and keep the pacing quick. The film lasts almost two hours (one minute under, to be precise), but it never feels bloated or especially long, which, in a movie like this with barely any action, is an impressive feat, and this is largely due to the writers’ ability to hook you into the story from the beginning. James’ plan is never really fully explained, and doesn’t seem to make any sense, but it doesn’t matter at all. From the intriguing opening which gives us a taste of the three main characters all seemingly on the train at the same time for different reasons, to the exciting final scenes (also filled with trains), Cold Eyes doesn’t slow down.

The cast is great, as well: The scenes of the team scouting various areas of the city looking for suspects are well choreographed and give you a sense that this is definitely a team who has done this for a long time and are used to it. They don’t all get a moment to shine, but they all still have good chemistry together and definitely feel like a tight unit. One team member who stands out is Kim Byung-ok as Detective Squirrel, who adds a touch of comic relief to the plot without being overbearing. Jong Woo-sung plays a mean villain, a cold-hearted and cool-tempered crime ring leader who always seems to be one step ahead of the surveillance team. His motives aren’t majorly clear, but Jong’s performance is enough to carry the role.

The biggest flaw the film has is its structure, which is rote and predictable from the beginning. The film hits all the regular beats it should – sad moment here, triumphant return here, action scene here – which means you can almost guess what’s going to happen at the end. But even this isn’t enough to distract from the enjoyment of the story. If you’re looking for a fun film to pass the time without having to think a lot, Cold Eyes does so without insulting your intelligence

Verdict: Expertly shot, well cast and intriguing from start to finish, Cold Eyes is a treat, even if the structure is a bit too familiar.