“Do you believe there’s a God?”
“Yes. I am God. You’re one. A god can be human. A god is someone who controls his destiny. Sometimes, there’s things you can’t control. You win some, you lose some.”

A pet project for Woo, A Better Tomorrow came at a time when he was feeling burnt out and in need of a creative boost. Enter producer Tsui Hark, who financed it, giving Woo creative freedom to do what he wanted; what resulted was a film that broke box office records, is considered one of Hong Kong’s finest, and heralded in a new genre: Heroic bloodshed.

Heroic bloodshed is a subgenre of action movies, and has become practically synonymous with John Woo’s films. Heroic bloodshed is defined by several characteristics: they feature elaborate gun scenes – nicknamed gun fu –; deal heavily in the themes of brotherhood, honour, redemption and revenge; and while this isn’t entirely necessary, it ‘s always a good idea to have a good helping of Chow Yun-fat. 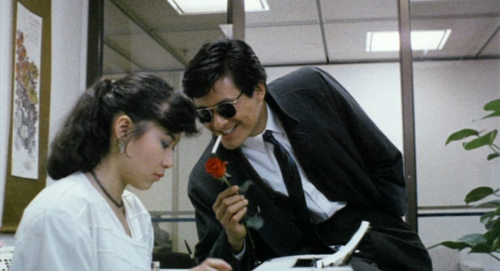 A Better Tomorrow focuses around three men: Sung Tse-Ho (Li Tung), his brother Kit (the late Leslie Cheung), and his best friend Mark Lee (Chow Yun-fat). Sung and Mark are both high-ranking members of the Triad, specialising in counterfeiting US bank notes. Kit is a rookie member of the police who doesn’t know of his brother’s position in the criminal world. His father tells Sung to quit, and so he decides to after one final job. And, in the style of such things, this is where everything starts to go wrong. Sung is betrayed by one of his brothers and arrested, and Mark, in another assignment, has his kneecaps blown out and becomes handicapped. Kit discovers his brother was a Triad all along, and it begins to mar his police career.

Sung is released three years later, and things have changed. Mark is no longer the ultra-cool suave hitman, and works as a cleaner to new boss Shing (Waise Lee). Kit won’t talk to him, and refuses to acknowledge him as a brother, even when Sung vows to turn over a new leaf and takes a job driving a taxi. Mark wants nothing more than revenge, but Sung wants only to make up with his brother, who has sworn to take down Shing. 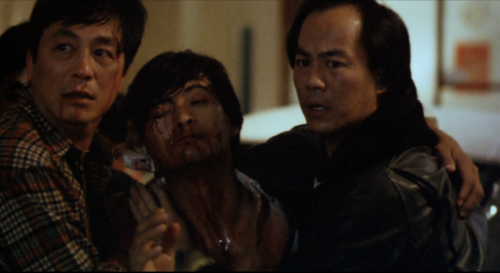 A Better Tomorrow was a cultural phenomenon when it came out: Mark’s style seen in the film (the first half, when he was cool) was widely emulated with people buying the same sunglasses and trenchcoat, but I doubt if any of them gave off half the charisma Chow did in the film. In fact, it’s his, and the two other stars’ performances that are the strongest part of the film. The plot itself is nothing amazingly special – there are some good twists and turns, such as the idea to cripple Mark at the beginning of the film – and it stays entertaining and satisfyingly gripping throughout, but it’s the three leads that are the real draw. Li Tung has excellent chemistry with both his on-screen brother and his best friend. They all play troubled souls differently and it helps lend a sense of credulity to the story; they deal with their traumas differently. Leslie Cheung puts everything into Kit, and his character explodes in bursts of rage and anger, while Mark internalises. We get that these are real people, not just gun-firing robots going through the regular motions of an action film. 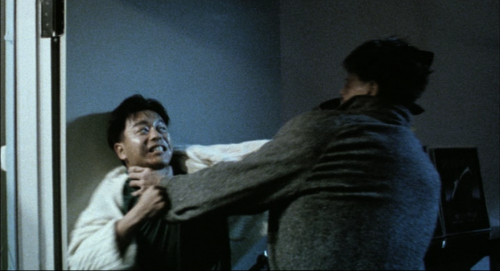 Seeing the three characters work off each other so well, especially in the early scenes when they’re all having a good time together, makes the conflicts all the more wrenching. John Woo doesn’t rush the pacing at all, and we get to know the heroes and the supporting players better. Tien Feng and Emily Chu play Kit’s father and girlfriend, and their contributions to the story allow the world of Kit and his brother to be more fleshed out, adding to the list of stakes the heroes can lose.

And the stakes are high. The second act of the film feels a little like the third and final part of a trilogy: the main characters are at their lowest point, and it seems like they have nothing to lose, and everything to gain. Usually this would seem like a rushed point to get to, after only half an hour or so, but Cheung, Chow and Tung make their characters endearing from the start. Throughout John Woo never falters with his theme of brotherhood and redemption.

And lastly, this is a John Woo film after all, the action. There’s not as much all-out gunplay here as you might see in Hard Boiled, and is mostly reserved for the final confrontation. Woo splits the action between fist fights and gunplay to add some variety. They exist to boost the story, instead of distract, and each fight has an emotional weight to it that is seldom seem in loud gun-heavy action films. They might not be as flashy or stylised as some of his later efforts, but they’re still strong, well-choreographed pieces that exist in a bit more reality than others. Tom Cruise jumping off a moving motorcycle in MI:2, or Chow Yun-fat sliding down a bannister dual-wielding pistols might be the definition of bad ass, but they have little grounding in the real world. Here, sure, Mark seems to have unlimited bullets at times, and most of the gangsters seem to have a major problem with hitting anything other than the floor two inches away from the heroes, but the hits seem more real and the deaths have more meaning. 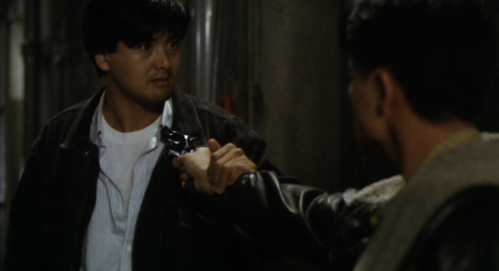 I can’t imagine this movie converting any non-fans of action film but there’s a reason A Better Tomorrow is often considered one of the best action movies of all time; its strong characters, tight story and great direction solidify it in the pantheon of greats.

Verdict: A Better Tomorrow’s emotional core and excellent cast elevate it from a good action film, to an icon of Hong Kong cinema

A Better Tomorrow (1986)
Also known as: 英雄本色 literally: “True Colours of a Hero”