Another great comedy showcase for the cast, My Lucky Stars improves upon the first film.

“(Speaks made up Japanese.)”

Ensemble comedy series are huge in Hong Kong: from All’s Well Ends Well, to the staggeringly big Troublesome Night series (with 19 films currently), it’s been a staple there for decades. The Lucky Stars series was one of the earlier ones (along with Aces Go Places), and it heralded an age of Carry On-style comedies – one still going today – where the cast would return in different roles and reboots were never necessary because characters and continuity were reset every film. My Lucky Stars was the second film in that series, an arguably important position, but how does it look?

The film opens with two Hong Kong cops Muscles (Jackie Chan) and Ricky (Yuen Biao) chasing a corrupt cop (Lam Ching Ying) through the streets of Tokyo, the latter having fled there. When he gets away, kidnapping Ricky with him, Muscles asks for help from his old friends, The Five Lucky Stars: Kidstuff (Sammo Hung), Sandy (Richard Ng), Herb (Charlie Chin), Rawhide (Stanley Fung) and Roundhead (Eric Tsang), who are all now petty criminals or minimum wage workers. They agree – mostly because of the monetary reward that comes with the job.

They are aided by the superintendent’s assistant – a woman codenamed Poison Ivy (Sibelle Hu), and because this is a daft, male driven comedy from the 80s, all five Lucky Stars immediately try to seduce her, with increasingly wacky ideas. They all travel to Japan, where they are to disguise themselves as millionaires, attract the attention of the crime bosses, and give Muscles the location of their hideout. 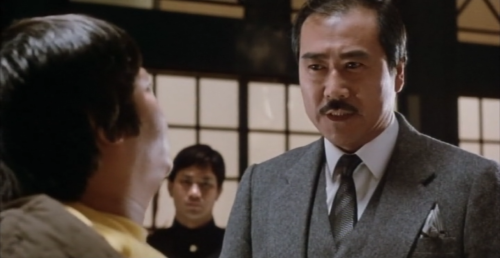 The second in the Lucky Stars septology, My Lucky Stars has a difficult task of outdoing the original, while leaving enough material untapped for future instalments. It’s a tricky balance, that very few series manage to achieve, but stars Sammo Hung and Eric Tsang, who directed and wrote the film respectively, do the smart thing by not deviating too much from the first film right away. Anyone who’s seen Winners and Sinners will no doubt see more than one familiar moment: for example Sandy here gets the gang in trouble with a bunch of identical bus drivers when he tries to use telepathy he learnt in a book to drive their van. In Winners and Sinners¸ he gets into trouble when he tries to turn invisible after reading it in a book. Moments like this give a sense of familiarity to the audience and tell us ‘sure, you won’t be watching anything one-of-a-kind, but you’ll have an easy-going, fun time’.

And that’s what is so much fun about the film: it never tries too hard to be something that it knows it won’t be. There are never as many big action set pieces as you’ll find in a Jackie Chan-starring vehicle, but the Lucky Stars films are more like a Marx Brothers or Three Stooges movie. It’s more about how the characters interact and play off each other than it is about kicking ladders into people’s faces. Having the film set in Japan helped, especially when a lot of the humour could be lost in subtitle translation: it allowed for a whole heap of funny fish-out-of-water jokes we can all relate to, such as one where the Stars try to order food at the hotel, but none of them can speak the language, so they each mime their orders; it’s a great piece of physical comedy that works regardless of subtitles. Some of the jokes fall flat- it’s inevitable when so many are floating about – but there’s enough humour that works throughout to be able to carry the film.

Not a lot of the characters have changed: the Five Lucky Stars are all still sleazebags of varying degrees; Herb is the cool, suave member, Sandy is the weirdo, and so on. Notably missing is John Shum, who has been replaced by Eric Tsang. Tsang wrote his character to be the punching-bag of the group. Roundhead is a simple-minded man whose friends take the mick out of him, taking the role away from Hung, who is now the most level-headed member and also the group’s leader. It’s hard to say what caused this shift in dynamic, but it helps cement the idea that this is Sammo Hung’s film. Sure, both this film and its predecessor were ensemble comedies, but My Lucky Stars puts Hung and his incredible nimbleness front and centre. 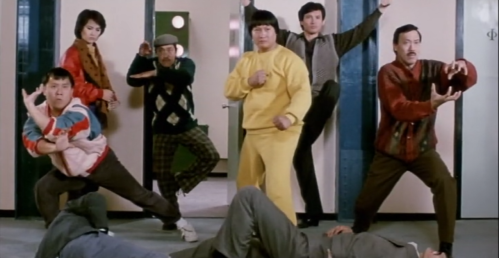 Like the last film, the action is sparse – Jackie Chan does the majority of the ass-kicking in this and he doesn’t really come into play until the final act – but always enjoyable. One of my favourite things about movies starring the Three Brothers (Chan, Hung and Biao) is that there’s always a few attempts to make unique fight scenes. Here we have Chan punching his way through a haunted house wearing a theme park mascot costume, and it’s so much fun. There’s also a very memorable fight scene involving Poison Ivy and a terrifyingly muscular kimono-clad henchwoman, and right at the end, a single punch by Hung. It’s a brutal fight topped off with a great punchline, excuse the pun, and encompasses everything that works about My Lucky Stars, and also everything that doesn’t. In the end, My Lucky Stars does what it says on the tin: a mix of clever and childish jokes, a great cast and a few solid action sequences, it won’t appeal to everyone, but to fans of the genre, it delivers exactly what you ordered.

Verdict: It’s signature Sammo Hung. If you like his kung fu shenanigans, you won’t be disappointed here.