While not to everyone’s tastes, Save the Green Planet mixes in horror, black comedy, and heart to make something quite unique.

“That’s him. He’s the leader. I’m positive. The only one with the royal genetic DNA code. A respectable job… a materialistic bitchy wife…and spoiled kids. They are all just disguises. The sly dog! He pretends to be an ordinary family man. But, ugly feature is hidden underneath that skin. In fact, he’s an alien from Andromeda!”

I like a film that sneaks up on you. What I mean by that is a movie where the plot leads you one way, using your predetermined assumptions to lead you into guessing where the story will end, but then reveals itself over time to be about something else. Maybe the focus switches to someone else, or we realise that all along the hero has been the villain (and vice versa). Save the Green Planet falls into that category, donning the disguise of a thriller, comedy, sci fi and drama as the story progresses.

Lee Byeong-gu (Shin Ha-kyun) is a man who is determined that aliens from are amongst us, and planning to signal others for a fullscale invasion. With help from his girlfriend Su-ni (Hwang Jeong-min), he kidnaps Kang the chairman of a pharmaceutical company (Baek Yoon-sik), who Byeong-gu is convinced is a high-ranking member of the alien invaders. As two detectives, disgraced cop Chu and eager newbie Kim (Lee Jae-yong and Lee Ju-hyeon), begin to follow the trail of the lost executive, questions arise as to whether Byeong-gu is really doing this to save the world, or if he is extracting revenge on the people who have treated him so badly in the past.

Save the Green Planet’s strengths lie in its ability to tell two or three different stories at the same time. One scene will make Kang’s imprisonment look like something out of the Arrival of Wang with Byeong-gu as a selfless protector of humanity. Then a second later he’s just a dangerous lunatic who has kidnapped a man who, while he may be an asshole of the highest degree, does not deserve the tortures put upon him. This odd fusion of styles can sometimes make a film feeling jarring and scattered sometimes, but here it blends in and gives us insight into Byeong-gu’s failing mental health. It’s this change in views that gives it its distinct flavour, and while that is definitely part of Green Planet’s charm, it’s not hard to see how it can turn people off. 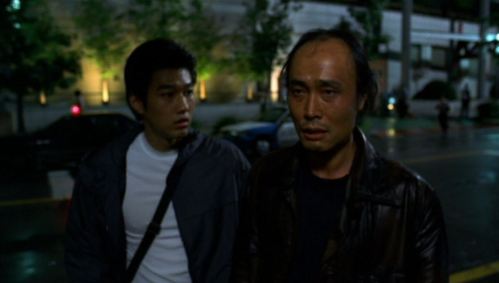 The interrogation framing of the movie is nothing original, and usually when you watch it there are two possible answers: the guy asking the questions is crazy, or he’s the only one who knows the truth. This inevitably makes the ending predictable, because you’ve probably guessed both of the possible endings by the time the ending rolls around. In Save the Green Planet, this question is answered one way, then another, then forgotten about, before going back to answer it the first way again. You really feel like you don’t know the truth and when it does come along? It doesn’t matter much.

See, Green Planet focuses on more than just the torture of Kang, and the truth behind the possible alien invasion of Earth. At its heart is a story about a troubled boy who has witnessed so much pain and has gone through all kinds of mental transformations to deal with it. The heartfelt moments spring right out of nowhere, just as you’re beginning to hate the main character. Everyone gets a chance to be both the protagonist and the antagonist at various points. It takes skill to make these characters flip-flop like that without losing any of their integrity, but it’s achieved really well here.

So much of this is thanks to star Shin Hya-kun. He shines in his role, bringing forth a half dozen emotions in a single take. The writing is strong, but it’s entirely the performance that sways our opinions on him, and Shin does wonders with his characters, making him a despicable psychopath one moment and a pitiful loser the next. The same happens with the sort-of-not-really antagonist Kang, who is sometimes a ruthless businessman who cares about nothing but his own interests, and other times a man who only wants to see his family again. There isn’t a protagonist in this film, really, save a couple of determined cops, but it means that it’s more of a storytelling free-f0r-all where anyone good can become a grade-A asshole or vice versa in a matter of minutes.

Director Jang Joon-hwan keeps the frames busy, hectic and full of life, so as to keep us on our toes. The colour work and the cinematography is messy, suffering from a bit of that ugly early-2000s look but overall manages, with the mise-en-scene, to contrast Byeong-gu’s mental state with the calm and collected police offers.

Verdict: Taking inspiration from countless genres, Save the Green Planet won’t appeal to everyone, but is nevertheless an eclectic, exciting  joyride.

One thought on “Save The Green Planet!”