The Girl Who Leapt Through Time

By putting the sci-fi stuff in the background, director Mamoru Hosoda creates a film that’s more focused on character growth and drama

Time travel is a tricky subgenre to write for. On one hand you’re dealing with something that doesn’t exist, and you can therefore do whatever you want with it. On the other hand it comes pre-packaged with a ton of rules about regarding what might happen if you, say, mess with the space-time continuum. There’s also a basic need to be clever – after all, there’s no point if you can’t alter history, or create mind-bending paradoxes, and this can be a bit divisive. I recently watched Predestination¸ a film based on Robert Heinlein’s short story ‘—All You Zombies—’, which I adored, but the person I was watching it did not, calling it clever for clever’s sake. Which, admittedly, it was, but that’s the idea, right? After all, what kind of time travel movie would be about high school kids asking each other out?

Well, actually, this sort of rom-com time travel mashup is evident in other films too, notably The Time Traveller’s Wife, About Time, and that Keanu Reeves film that doesn’t have the word time in the title. The Girl Who Leapt Through Time , one of the many films adapted from Yasutaka Tsutsui’s novel, fits nicely with the rest of them. 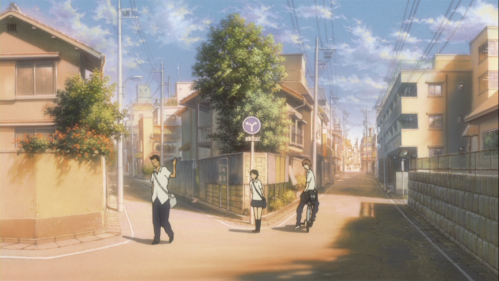 It concerns Makoto Konno (Riisa Naka), a high school student who enjoys hanging out with her two best friends Chiaki (Takuya Ishida) and Kosuke (Mitsutaka Itakura) and playing baseball. One day, while staying late at school, she falls onto a weird device which lets her (literally) leap through time. She talks to her aunt (Sachie Hara) about this, and we discover that she knows all about this, it having happened to her when she was a girl. She advises Makoto to not waste her ability, and warns her that using it selfishly might have adverse results on the people around her. Makoto doesn’t listen, instead using it to avoid using fault cooking gear in class (letting the oft-bullied kid use it instead), getting good grades in tests (annoying Kosuke who studied incredibly hard for this), and avoiding Chiaki’s admittance of love to her. However, she discovers that she has limited uses with this device, and begins to learn to use it to help those around her.

That’s the vague gist, more or less. The scale of it is small, and that’s it greatest strength. The plot never goes beyond the week-ish-long time frame, choosing to go back and forth between the days as Makoto learns a different lesson and chooses to change thing to benefit her friends or herself. The plot limits itself to love triangles between teenagers, and the problems associated with growing up and making a future for yourself. If you take the time travel elements out, The Girl Who Leapt Through Time is just a film about a young teenage girl trying to make sense of the changes that are happening around and to her.

The characters and situations are realistic, and with the majority of the screen time, Makoto is likeable and well developed enough as a character that the situation doesn’t need to be high-stakes for us to want her to succeed. Yeah, at the beginning, she changes events in her daily life to make herself come out on top, but there’s some relatability to that: we’d all do that if we had her power. She’s a teenager figuring out life and love and has the ability to make unwanted conversations never happen, so she knows that Chiaki is in love with her, and it gives her time to process the information and consider what it might be like being with him, leading to her falling in love.

What’s interesting to note though is that when they do start moving into the bigger high-concept sci-fi stuff (which they touch upon ever so briefly near the end), that’s the weakest part of the film, and raises far more questions than it answers, and leaves a fairly ambiguous ending. On top of that, it adds a few plot complications by being a sort of sequel adaptation of the novel, with the aunt being the main character from that. This leads to a bit of confusion to audiences who might not know this, and might see the aunt as a future version of the main character, or something. It’s not entirely explained within the story, and took some online research to understand. To say the ending is where the film begins to lose focus on the plot is a bit harsh, but it does begin to falter somewhat. Thankfully, it’s also the place where it is at its strongest, emotionally. It’s easy to ignore the time travel stuff, and the unanswered questions because the audience is busy being emotionally invested in Makoto.

The film is at its strongest when it deals with the intertwining relationships between the main and side characters and the occasional near-death by tram, not when it deals with a future without art, or whatever. With its constant back-and-forth between moments in time it can get a bit disorienting at first, but once you get the timeline you find a film that is clever without having to go all out.

Verdict: The Girl Who Leapt Through Time, with its likeable cast and pleasant story shows us that you don’t have to make high-sci-fi to create a smart time-travel movie