Spring in a Small Town

“A feeling of helplessness, atop this broken-down and hollowed-out old city wall.”

Set in the ruined house of the once wealthy Dai Family, Spring in a Small Town is a subtle, low-key and moving drama. It features Yuwen (Wei Wei) a housewife who is unhappy in her sterile and lifeless marriage to patriarch Liyan (Shi Yu), who is a hypochondriac who spends his days in the garden, nostalgic for the past. The marriage is loveless, but the two still care for one another, and express concern that the other is not happy with their current situation. With them live Liyan’s younger sister Xiu (Zhang Hongmei), who can’t remember the war and lives a happy, carefree life; and the manservant Huang (Cui Chaoming), who is the sole remaining member of the house staff who has remained loyal. 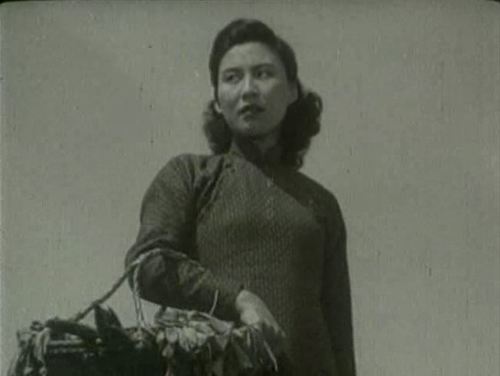 The family spends each day with the same routine, getting through each day with a layer of misery over their heads, until Liyan’s old childhood friend of Zhang (Li Wei), visits, bringing life to the house, as well as a history of romance with Yuwen. What unfolds is a family drama that is less focused on giving us biting political commentary, and instead is content with telling a heartfelt, honest story.

It’s hard not to see why Spring in a Small Town is considered a classic in the history of Chinese cinema. Filmed not long after the end of the Sino-Japanese war, this film is notable for being non-political and melodramatic, rare for its time, which was filled with propaganda and war-themed films. This picture touches upon contemporary themes, but uses them in a wholly different way, which makes it stand out.

Here, the bleak world of a post-war life is used to emphasise the loveless marriage between the two main characters. Yuwen and Liyan don’t dislike one another, but they know that neither one of them is right for the other. In a not-so-subtle yet excellent piece of visual imagery, the Dai house is literally broken, and there isn’t enough love to piece it back together. Liyan holds onto the past, but is blind to the current world, and convinces himself to be too ill to rebuild his home, or his life. Younger sister Xiu represents the other side of the coin: a carefree future,. Yuwen yearns for a brighter future but like servant Huang feels too much a sense of loyalty to her husband to do anything. Zhang serves as a bridge between all of these differing points of view, often coming up with solutions, but they tend to fall on deaf ears.

The film is told mostly through the eyes of Yuwen, who serves as a focal point and provides ongoing narration throughout. The solid writing and excellent direction help give us a sense of who she is straight away. Regardless of political situations of the time, Wei Wei gives a strong, convincing performance, as does the whole cast. Combined with some visual parallels to what they’re going through – most of the cast finds themselves drawn to the broken borders of the city wall at various parts of the story – and you have a very moving, if slight, Chinese classic.

Verdict: Everything you need to know about Spring in a Small Town is in the title: it won’t be to everyone’s tastes, but it is an excellent, well-made piece of China’s cultural legacy