Well, that was weird.

“I respect a woman who stands up for herself. Even if she does like sticking her nose in other people’s business”

Hey, do you remember Whisper of the Heart, the 1995 Studio Ghibli drama about a young girl struggling to come to terms with what she wants to do when she grows up? It was a massive hit in Japan, but one character stood out more than the rest: the little statue that the old man shows her; a well-dressed, dapper cat called Baron.

Ghibli decided to give him his own movie, completely unrelated to the former. It focused on another girl, Haru, who is introverted and ditzy. One day, she saves the life of a cat crossing the road, who thanks her. Not understanding, she later receives a visit from another cat claiming that she saved the life of Prince Lune of the Cat Kingdom. They shower her with unwanted gifts, before telling her she is to marry the prince.

Not wishing to spend the rest of her life married to a cat, Haru seeks out help, and is told by a mysterious female voice to find the Muta, a large white cat, who will help her find the Cat Bureau, where she will be able to find help. The Bureau is run by the Baron – the statue who comes to life – and Toto, a crow who is also a statue that comes to life. Before they can do anything, Haru is kidnapped by the cats, and the Bureau must rescue her from the kingdom before she becomes a cat forever. 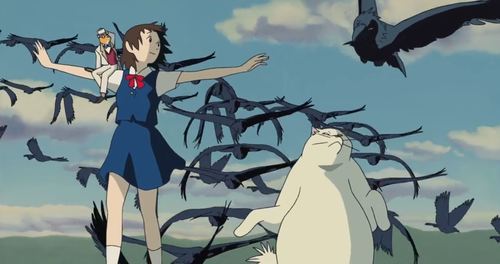 You might notice from the plot above that this film is a little bit out there. But this is what Studio Ghibli is so good at providing us; stories that come out of nowhere, and take us for rides where the destination is never quite where we thought. The Cat Returns is actually one of the least zany movies the studio released at that time, being sandwiched between the releases of Spirited Away the previous year and Howl’s Moving Castle the year after. Compared to the two of them, this is a more low-key story, with smaller stakes and a lazy, good-natured pace, but easily the more disjointed.

What’s most striking about this picture is that everything seems a bit rushed. This isn’t necessarily a bad thing, and in fact the movie is very enjoyable throughout, but you get the very distinct impression that it was being made up as the writers went along. Sometimes it felt like the basic outline was written by two children going back and forth, exchanging cool ideas. Because of this, the movie has ultimately no structure, or at least none that matters. There’s a loose plot tying it all together, but it is reminiscent of Alice’s Adventures in Wonderland, which also had a plot solely for the purpose of having a string to connect all the weird little moments.

This is probably due to the movie’s all-over-the-place production, which started out as an outline for a spin-off of Whisper, which was then adapted into a manga by the original author, which was then adapted again into an animated feature. It’s only natural for the film to lose a few threads here and here, but it means we’re left with a movie where 90% through, we learn one character is a feared legendary bandit all along, and also that it’s easy to use birds as a staircase. The Cat Returns is an exercise in imagination, and is proof that you don’t have to adhere to all the rules of storytelling to come up with an enjoyable script. In fact, sometimes it’s fun to be kept guessing as long as it keeps pumping out the entertainment value, which this does. The bits that don’t land as nicely make perfect for riffing on, too, so nothing’s a total loss.

It’s good to know that none of this detracts from the quality of the moviemaking. It goes without saying now that the animation is beautiful, and the scenery is once more top quality Ghibli standard. Some of the human characters look a bit odd to me; they resemble something closer to an 80s shonen series than anything from Studio Ghibli. Again, a minor qualm against what is otherwise a very enjoyable hour-and-a-bit. There’s the studio’s signature all over this, and its smaller scale adventure is perfect if you’re in the mood for something short, sweet and ultimately a good deal of fun. A compelling cast, some inspired moments of wackiness and excellent visuals are sometimes all you need.

Verdict: The Cat Returns never overstays its welcome, which makes it all the more pleasant

The Asian Cinema Critic’s Patented Ratings System
Overall entertainment: 8/10
Story: 9/10 for imagination, 6/10 for structure
Violence: 1/10
Sex: Come on, guys, it’s a kids’ film
Cats: So many cats
Reason for existing: None. But I’m glad that it does

One thought on “The Cat Returns”