The Taking of Tiger Mountain

An historical epic about war, adventure, spies, snowy landscapes… and tigers. What else can you ask for?

“Retribution comes to all, eventually.”

To understand what this film is about, a bit of historical background might be necessary for western audiences. Between 1938 and 1945 (the second Sino-Japanese war), Japan tried to expand to all the countries around, including China. Towards the end of World War II, being attacked simultaneously by the USA, Russia and the newly branded People’s Liberation Army (PLA), Japanese troops were forced to withdraw. Their departure left behind a lot of military equipment and territories that were up for grabs. This is, in a nutshell, when the story begins. Bandits have taken a Japanese fortified position along with some arsenal. A PLA squadron, trying to clean up the area, will come to help a village that had just been raided. They will try and find a way to take the stronghold.

Breaking down the film into individual storylines is close to impossible for two main reasons. The first one is that it comes from a book (Tracks in the Snowy Forest, written by Qu Bo) that juggles with more than a dozen main characters. Almost everyone we meet during the 2 hours and 20 minutes of the film has a bit of backstory or enough scenes and dialogue lines to be properly fleshed out. This allows you to care for them and wonder what will happen.

The other thing is that Tsui Hark is still an amazing storyteller who doesn’t care about the story he’s telling. The last sentence doesn’t make sense but it’s exactly what you get. The overall storyline, Tsui Hark doesn’t care about it one bit. Having seen the movie multiple times, I still struggle in identifying what the main objective is. So, how come the movie is still wonderfully narrated and easy to follow? He works in assembling sequences that have short-term goals to reach. You might not understand the main plot but at each moment in the film, there is a secondary plot that needs immediate resolution that requires all your attention. In the end, it’s like a magic trick: you get distracted so many times that you end up liking the experience even if you don’t know how you got to it. He also takes pride in switching regularly the tone of the movie in those scenes. He alternates between a war movie, comedy or pure spy tension when needed. It works surprisingly well as all of it is woven in the larger adventure genre. It feels kind of like watching a new Indiana Jones adventure without the archeology part.

Coming back to the story, the first focus of Tsui Hark was to get rid of the political themes that were carried by the novel. Qu Bo, the writer of the novel, was in the PLA and one of the characters Yang Ziron (played by Zhang Hanyu) is based on a real life person. His book was heavily used during the Chinese Cultural Revolution to teach and preserve the « true » Communist ideology. It has even been adapted into a film in 1970: Taking Tiger Mountain By Strategy directed by Xie Tieli. Adapting this novel once more for Tsui Hark has the opportunity to get the project approved and funded by the Chinese censorship and make a truly spectacular movie out of it. Putting politics aside, the movie ends up being a fight between good, represented by the soldier s of the PLA, and the ultimate evil, personified by Hawk, the leader of the bandits.

Tsui Hark has always had one goal: to create an entertaining movie that always pushes the cinema medium to new extremes. His visual and stylistic ambition has sadly almost never been supported financially of technically. Some of his earlier works are close to embarrassing when you see how badly some special effects shots have aged. Since the first Detective Dee movie, he has changed his ways. From frantic movies like The Blade or Time and Tide, he now slows down the editing of his movies and he is paying more attention to the quality of special effects. This way, his cinema seems more accessible to mass audiences than ever before. Even with this important change in his filmmaking process, he always seeks to allow movement in almost every shot. Camera work is at the same time graceful and playful. Every single frame is absolutely gorgeous and filled with details. Another trait Tsui Hark has is, for better or worse, to never discard any new/different idea, even the most crazy one. In this film, he puts the viewer right into the action by making him follow bullets or birds through the air. Though it seems uncanny, it is never to show off how cool and creative a shot could be but to add information to what we’re seeing. These travelling shots usually allow us to get an easier grasp on how the action is staged and where the opposing factions are. This is particularly important when, as in the final combat, you are dealing with opposition on different levels and at different places of the structure. All these details make the confrontation scenes of the movie a delight as you are never lost in the action. As for the storytelling, each of the fight scenes has a different look and feel, from a Seven Samurai-esque defense of a small village to the monumental attack on the fortress. Of course, not all of the movie is solely focused on action. The spy taking most of the movie time, it had to rely on two other assets of this production: the cinematography and the cast.

The cinematography is absolutely gorgeous, offering a vast array of ambiances. When you think about it, a movie set on a snowy mountain is bound to look the same from shot to shot. Using night or locations to influence the look of the sequence, every location has a slightly different color palette. It creates either an atmospheric feeling, as in the train arrival scene for instance, that gives the impression of watching a shadowy film noir. Other times it might be splashes of colored light that give a sense of impending drama. Choi Sung-Fai did an amazing job when you consider the size of the sets to light. Not only they were huge but lighting had to be consistent even in the far distance as the movie is made in 3D. It is to be noted that Tsui Hark is one of the few directors to shoot his movies in native 3D. To him, this is now a part of the visual style he’s trying to display. This being his third attempt with the format, he is now in total control of the depth to add to a scene or objects that come between the camera and the actors to get a better 3D feel. Watching it in 2D, you feel that efforts were made in that way but it doesn’t disrupt the movie experience. I would strongly recommend to watch it in 3D if you can. 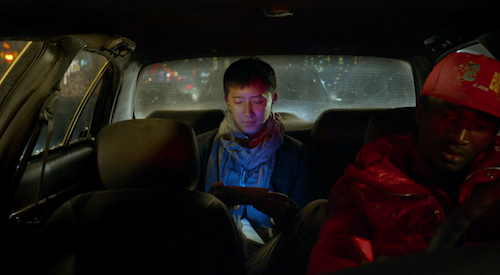 Another quality of the movies relies on its vast cast delivering good performances. I didn’t know most of the actors/actresses or, if I had seen them in prior films, they didn’t strike my mind. The most renowned is Tony Leung Ka-Fai. His portrayal of the evil Hawk is absolutely staggering. The make-up makes it so that you can’t tell that the role is played by Leung even if you are familiar with his filmography. The casting was very well done because you never get that odd feeling of not knowing who is who. Every actor or actress brings a different energy or rhythm to their part that allows to tell them apart. Zhang Hanyu, playing Yang Zirong, is probably giving the most impressive performance, blending toughness and cunning into the perfect spy portrayal. The screenplay of course gives him the most time to shine but others get their moments as well, giving us a lot of good actors to follow in the coming years.

The last thing that’s odd about a Tsui Hark movie is, as usual, the beginning and ending. The movie actually doesn’t start on the snowy slopes of the Tiger mountain but in New-York on a Christmas eve in 2015. That’s quite a shock and it seems completely out of place in the narrative. This is the way Tsui Hark thinks of his movies. For him, memory is important and, through these sequences, he tries to bring people to acknowledge the old film and remembering it fondly.

I won’t tell how the movie ends but, during the credits, you get a final rush of adrenaline with a kick-ass action scene. To me, it feels like Tsui’s way of showing how he saw the final fight if he had had a total creative control. From what I’ve heard, this sequence was always scheduled to appear during the credits. Even though it feels a bit out of place, this is so rare to be brought back into a movie after the emotional climax for more zaniness. I’ll let you make your mind upabout it.

Verdict: The perfect blend of impressive action sequences and tension in a blockbuster for all audiences. The proof that Chinese censorship cannot restrain creators of this magnitude.~