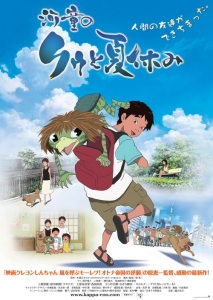 It may be overlong, but Summer Days with Coo is sincere, touching and shockingly dark in places

“Dragons are scary, but these days, humans are even scarier.”

I’m not going to lie. I picked up this film solely because lately I’ve been watching a lot of Downtown no Gaki no Tsukai ya Arahende!! and realised that I had reviewed Fine, Totally Fine without knowing at the time that Gaki cast member Tanaka Naoki played a supporting role in it. So out of curiosity I checked out the rest of his filmography and found this. It seems pretty innocent enough from the trailer and movie poster.

And two minutes in we witness the absolutely brutal murder of a kappa father in front of his son.

OK, so Summer Days with Coo is an animated drama about a young kappa (nicknamed Coo), who witnesses his father be killed by samurai over the development of the swampland. All of a sudden the ground opens up and the Kappa is swallowed whole. 200 years later, a boy called Uehara Koichi (Takahiro Yokokawa) who is something of a loner, who stumbles upon a fossilised Coo (Kazato Tomizawa) in the ground. He soaks it in water and the creature comes to life. They’re taken in by the family, and Koichi and Coo start become close. Coo, however, is still quite afraid of humans – despite his friendliness towards the family, so the Ueharas decide to keep him a secret. It isn’t long, however, until word of Coo’s existence leaks and the media begin to descend upon them. 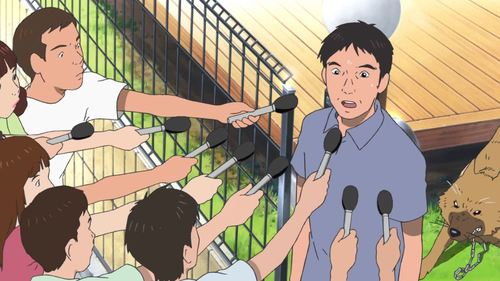 OK, that last sentence was a bit of a lie; it is a long time until the media find out, and this is also one of the biggest gripes of a film that’s actually pretty good in most other areas. See, Summer Days with Coo is something a long film. It clocks in at a whopping 140 minutes (!) but also doesn’t really have all that much to say. By the time there’s a media circus outside their front door – which isn’t the climax of the film but rather the start of the drama – we’re already almost an hour and a half in. I understand the need to set up the connections this boy has to the kappa, and some parts (such as the scenes where Koichi and Coo scour the countryside for areas known for kappa sighting, while bonding), are sweet and touching, but could probably have been trimmed here and there without the film losing much in terms of story.

And this is a shame because Summer Days with Coo has a lot going for it. The characters are for the most part pretty likeable. The young daughter starts out grating but mellows out as the film progresses. Coo and Koichi’s friendship works well, as does the budding relationship between Koichi and his kind-of love interest. It never tries too hard to throw drama at us and said drama is usually well earned. It never goes for a cheap moment of tension. There’s a moment at the TV station involving his father’s mummified arm that feels like it should have been cheap and contrived but actually makes sense. But when it does drama, it does it hard. 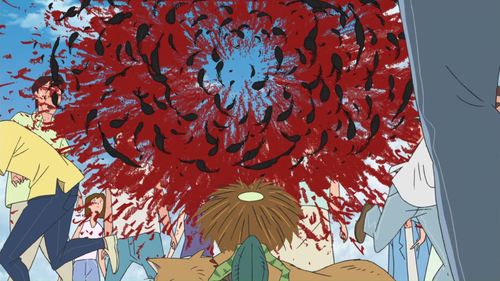 That’s Coo exploding a bird with his mind. There are several scenes like this that are either brutal in their violence, emotionally wrenching or both. Because of the film’s usually jolly and sweet nature, these moments come as jarring tonal shifts that, like I said before, aren’t unearned but are certainly a bit rough. Especially when you come off a gentle scene of the characters swimming or wrestling. And that’s a good summation of the film right there: long moments of serene, quiet filmmaking followed by birds exploding, or dog beatings. It’s like they know they’re gently lulling you to sleep, and need these moments to wake you up. 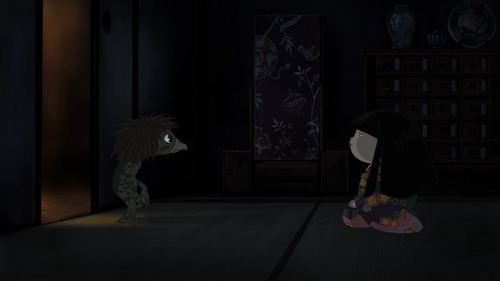 Summer Days with Coo is a fun time, but its running time might not be for everyone. I’m not usually one to judge a film by its runtime, and don’t understand people who do, but even I can agree that two hours twenty for a film that could easily be 90 minutes is a bit much. It’s worth a watch if you have some time to kill and want something (mostly) easygoing, but there are also a tonne of similar movies you could also be checking out, and Coo doesn’t have a tonne to make it stand out.

Verdict: Charming, sweet and sometimes horrifying, Summer Days with Coo is a bit long, but rewarding

Summer Days with Coo (2007)
Also known as: 河童のクゥと夏休み (Kappa no Ku to Natsuyasumi), lit. “Summer Vacation with Coo the Kappa)