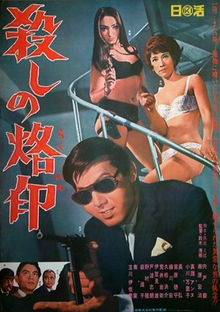 More than the sum of its parts, this film is an intoxicating melange of style, violence and surrealism

“You made a bad mistake. You’re finished. Your ranking’s gone. And you’ll be killed by someone.”
“I know that. We’re to kill or be killed.”

Sometimes a movie can be something else. Sometimes they’re essays in disguise, or poetry in cinematic form. In the mid-1960s Suzuki Seijun decided instead to create something different: a pop-art collage of scenes and music that is equal parts film and anti-film. He threw them together, added a great soundtrack (that opening koroshi no blues is gorgeous) piecing together a story in the process. The result is Branded to Kill.

Branded to Kill stars Joe Shishido and his comically enormous cheeks as Goro, the Number 3 Hitman (as in, the third-highest-ranked hitman of the Japanese underworld). He and his wife Mami (Mariko Ogawa) fly in to Tokyo to meet with Yubahara (Isao Tamagawa), a yakuza boss who has a job for him: escort a client safely home. It goes well and afterwards, he meets femme fatale Misako (Annu Mari), who gives him a ride home. She reappears while Goro is on a second mission, and gives him a near-impossible target: a man who will only be vulnerable and in sight for a few seconds on a crowded street. Goro takes the job but a butterfly lands on the barrel, causing Goro to miss and kill and innocent bystander. He is informed that he will lose rank, and be killed, leaving him with no idea of who to trust, and with the legendary Number 1 Killer (Koji Nanbara) on his tail.

This movie is really all over the place and while I’d consider that a negative trait for basically every other film, Branded to Kill wears this like a badge of honour. The film went through some famously difficult production, with studio Nikkatsu hating every moment of it, to the point where after production was finished, director Suzuki Seijun was fired from Nikkatsu. There aren’t a huge amount of films that have such a negative impact on a director’s career – Michael Powell’s Peeping Tom comes to mind – but there always seems to be a running theme: these movies tend to be way too ahead of their time. These are frequently films that are revile by critics and audiences who, later, understand there was true brilliance hiding there all along.

It’s not hard to see either side of the argument, really. Branded to Kill operates like a lot of similar yakuza films and might set the audience up for the wrong kind of expectations. Suzuki then turns the tables completely on us, and gives us a film that doesn’t so much ignore the rulebook but completely obliterates it. He forgets establishing shots. He chucks in random experimental techniques all over the place just to throw the viewer off. This isn’t experimental in the way a movie like Tetsuo is, mind you. Branded is cohesive throughout, and easy to follow. It’s just littered with weird stylistic decisions that seem bizarre at first but ultimately help shape the film’s identity. Without those, it would be quite boring.

Branded to Kill’s story is fairly weak, even by yakuza film standards. However, it’s obvious that this is done on purpose. Here, Suzuki focuses on the film’s visual characteristics and relies on those to make the film stand out more. Which, it’s fair to say, it does. Its visual language is rich and poetic, filled with weird imagery and odd moments. This film was created to be interesting, not make sense, so we have weird jump cuts and questionable pieces of editing that, depending on your tastes, either shake up the process or drag the film down. It’s really your call. Because despite the praise I can throw on it, Branded does have its share of negative features.

The pacing and editing is a bit too haphazard, which prevents you from fully immersing yourself in the story. The acting is good, but comes off a bit corny at times, which doesn’t help. Branded to Kill works better when viewed academically rather than for entertainment. This is Suzuki throwing everything he knows about film out the window and just having fun with it. Whether or not you like it is entirely up to you. For my part, it succeeds far more often than it fails, and for that is reason enough to recommend it.

Verdict: Dreamlike in many respects and visually impressive, Branded to Kill a masterclass of experimental filmmaking.