This dull snoozefest is made all the worst by a lacklustre plot and a thorough lack of scares.

“I understand nothing.”
I wrote some time ago that I really didn’t like The Grudge, one of the most recognisable and beloved J-horror franchises. It had some decent scares, but I found that was about it. When I saw that Marebito, which looked to have less plot but more atmosphere, was by the same director (Takashi Shimizu), I was hesitant but curious. Sure the best thing about the Grudge was the story, and Marebito seemed like the sort of movie that wouldn’t have one, but maybe they’d replace the interesting narrative for something else. Boy was I wrong.

Instead, what we have is a pointless, weird little movie that isn’t strange enough to be memorable or interesting. Marebito’s most endearing feature is in its casting of Shinya Tsukamoto as Masuoka, a creepy videographer who only really looks at life through the lens of a camera.  Tsukamoto plays the role with a creepiness that really sells the part. Obsessed with “seeing true fear”, he wanders around underground stations, going down unauthorised tunnels and filming everything. After witnessing a man stab his own eyes out in a station, he revisits the station, going further underground until he’s suddenly in what the now-blind man from earlier (who just appears out of nowhere) refers to as the tunnels beneath our Hollow Earth.

From there, Masuoka finds a naked woman (Tomomi Miyashita) who has been chained up and takes her back to his apartment. As he goes around town being weird, he keeps an eye on this girl through high quality live-streaming (in 2004!) and learns she only eats blood. So begins another movie altogether, one where he kills people and takes their blood. The movie plods along while trying so hard to be clever. The problem is it’s too profoundly stupid to ever achieve a resolution remotely resembling smart. It then stumbles gracelessly to a finish, not really making a lick of sense throughout. Hell, it only clocks in at 90 minutes, but somehow manages to feel longer than the 156-minute The Wailing. How is that even possible?

Marebito starts out pretty well. It feels like it has something to say, and something to unpack. It’s certainly shot like an arthouse horror, and the casting of Tsukamoto is meant to harken back to Tetsuo the Iron Man, except all that it does is remind us of how you’re meant to do that kind of movie. Marebito has no idea what it’s doing and the end result feels like a student film from the 90s unceremoniously chucked on YouTube after being found a decade later before being immediately forgotten about. There were ideas there: the usage of “Dero” to evoke the work of Richard Sharpe Shaver, the weird theories, the Lovecraftian influences, but like the earth they’re travelling through, everything feels hollow. 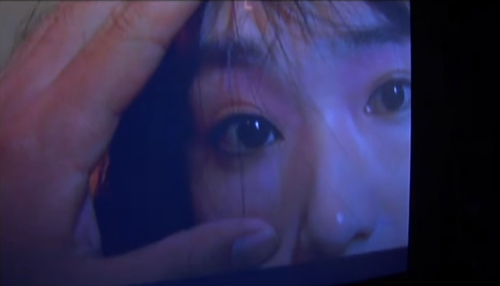 Whereas The Grudge was a pretty straightforward horror (and was, at the very least, simple to follow), Marebito wants to be something it cannot be. It never knows when to stop, and completely forgets to be a) consistent and more importantly, b) frightening. There isn’t a single spooky moment in the entire film, which makes me hesitate in even putting it in the horror category. It’s more like a sci-fi, or a psychological thriller, except where the main character’s mental health has already deteriorated to the point of malfunction and an inability to can it with the inner monologues. If you want something like this but better, go all out and watch one of Tsukamoto’s directorial features.

Verdict: Equal parts gibberish and slog, Marebito could probably do with a remake.