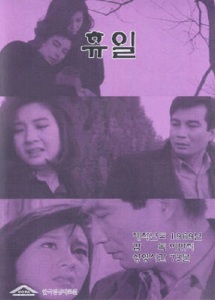 “To our gloomy Sunday.”

Every Sunday Huh Wook (Shin Seong-il), a perpetually broke young man, goes to see the woman he loves, Ji-yeon (Ji Yun-seong). They meet outside of a coffee shop, and go for a long walk, but there is melancholy in the rendezvous. Ji-yeon is pregnant, and neither of them can afford a family or even an abortion. The only option is for Huh to find his friends and ask them for money – something which does not come easily.

At its core, A Day Off is melodrama through and through. So much so that the film was banned until fairly recently due to strict censorship laws of the 60s (a theme we’ll no doubt be seeing a lot of during the London Korean Film Festival’s retrospective of Korea’s cinema). Its pessimistic look on modern life and its glib approach to relationships and the touchy subject of abortions (illegal at the time and – if my sources are correct – still is now) was something of a no-go for the Korean government at the time. Director Lee Man-hee refused to change its tone to something more cheerful, and so it was shelved.

And yeah, it’s certainly not a cheerful movie. There’s a powerful romance between the two leads and they clearly have very strong feelings for each other, but the unfeeling, cold modern world won’t let them be together. The movie was reflective of life in a callous and cruel city and although it was made over fifty years ago, it will likely still speak to a number of people who feel like they’re in a similar position.

There were hints of this story in last year’s London Korean Film Festival opening – Microhabitat, in which a young woman’s relationship and friendships are strained due to monetary pressures that never cease. In the worlds of both movies, life is a burden: relationships, marriage, children – all of it costs money. Even choosing a place to meet is too costly, and these, along with the simple fact that nothing in the future is certain, are enough to put massive road blocks in the way of our protagonists. Ultimately, A Day Off tells us that the world is cold – a theme which is punctuated by Lee’s choice of a harsh, snowy winter.

A Day Off’s greatest strength lies in its simplicity and realism, and the way it handles its core drama. The dialogue is raw and feels true to life, largely due to the inconsistent way the characters talk. Thoughts trail off, moods swing wildly and topics are touched upon and changed shortly, and it’s through this that we get the biggest understanding of these flawed, but ultimately human people. And it’s not like his friends are bad people, it’s just that they have to look out for themselves too; they’re just as human as the protagonists. And that is the movie, in a nutshell. It’s a bleak, but poignant glance at life in an increasingly brutal world. Question is: do you keep fighting, or just drop it all and go drinking instead?

Verdict: A Day Off is a short, but affecting look at contemporary Korean life that’s both culturally important and historically significant.