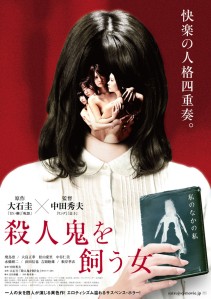 An icon of J-Horror tries his hand at something more psychological: how well does he fare?

“I’ll protect you from your mother and men.”

After having seen Ringu for the first time years after cultural osmosis had basically ruined the film for me it was nice to go into a Hideo Nakata film with close to no knowledge about it. The Woman Who Keeps a Murderer was a curious title for a film, and offered a number of interesting possibilities for what it could be about. Honestly I had no idea that the film was about a woman with dissociative identity disorder, so that certainly came as something of a decent surprise.

This woman is Kyoko (Rin Asuka), who lives alone with her three other personalities (all represented physically by different actresses) and discovers one of her neighbours is one of her favourite authors, Fuyuki Tajima (Kenji Mizuhashi). As she develops feelings for him, the other personalities begin to act out in increasingly rash ways and things don’t get any better when Kyoko’s terrible mother appear. Sure enough, the bodies start to drop.

The Woman Who Keeps a Murderer is a lean 80-odd minutes, which usually is quite refreshing for a horror film. Too often do they lose themselves in the depths of their own lore, losing all mystery and horror because of it. But Woman weirdly goes in the opposite direction, throwing a movie at us that is so void of substance because, well, when you remove all of the excess and the fat there’s really only about 45 minutes of actual movie.

The rest is dedicated to bafflingly long sex scenes between Kyoko and her other selves.  And while I’m usually all down for some good sex my movies (my ratings system dictates it after all) these go on for so long and offer so little to the plot you begin to wonder if you’re actually in the right film. The title card appears twenty minutes in, suggesting a longer and richer film, but it’s really just an excuse to watch what is effectively just Kyoko masturbating in the most complicated way. Really, I’d have loved to see more of the scenes of her and her other selves interacting: they are by far the most entertaining in the entire film.

Woman was advertised as a horror movie, and it barely qualifies. The murders are as tame as the sex scenes aren’t, and we get glimpses of banal and rather underwhelming violence. It’s a shame because there’s something good to be made here. The basic building blocks are good, but they’re used so disappointingly it’s almost impressive. The Woman Who Keeps a Murderer isn’t the worst film. It’s an OK thriller and the ending is good as well, but it’s just too damn shallow. The story elements are good, if a little samey. I’m going to categorize it as a horror film only because it really wants me to but there isn’t a scare to be had. I guess it’s rather fitting for a film about dissociative identity disorder to be so confused about its own personality.

Verdict: Never focused enough to be tense, The Woman Who Keeps a Murderer needs a couple of rewrites, but there’s a good story in there somewhere.

Overall entertainment: 5.5/10
Violence: 5/10
Sex: 7/10
Doll: Always creepy
Mother: Why does one of the identities share her mother’s name?
Mouth sounds: Really love those squelches, don’t they?
Cops: Who called them?

The Woman Who Keeps a Murderer (2019)
Also known as: 殺人鬼を飼う女
Japanese