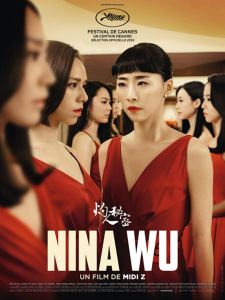 An aspiring actress learns that fame has a price in this tense psycho-drama.

“’I can’t take it anymore! They’re not only destroying my body, but my soul!’”

It’s going to be impossible to not look at Nina Wu – Taiwan’s psycho-thriller about a young actress whose reality starts crumbling before her – without comparing it to one of the greats in the genre: Satoshi Kon’s masterpiece Perfect Blue. Or at least so I thought when I stepped into this movie. But as the story unfolded I was very pleasantly surprised to find that, in fact, this movie went its own way in describing the things people would suffer through for fame.

The titular Nina Wu (Wu Ke-xi) is a young actress from the Taiwanese countryside who moved to Taipei some years back in order to make it big. She gets a call from her agent Mark (Lee Lee-zen) who tells her of a major role in an upcoming historical drama for which Nina has been chosen to audition. The role, however, requires some fairly graphic nudity. Nina wrestles with this but ultimately accepts, firmly believing her choices are for her greater good.

I really enjoyed Nina Wu, even if it probably isn’t as smart as it wants to be. The fault, if I can even call it that, is probably down to the script more than anything else. For the most part, it’s convincingly written, with characters that feel real. Where it fails is in the mystery angle and the way it tries to throw twists and turns. There’s hints to the sort of mind-bending craziness that permeats the best of the genre, but it never reaches those heights. The information revealed or hidden to us isn’t always the most logical for the scene at hand, leaving the audience in a weird limbo state where they’re both over confident in what’s going on and completely confused.

Nina Wu is … for lack of a better phrase, almost there. Director Midi Z along with his cowriter (and lead actress) Wu Ke-xi are very confident both in front of and behind the camera because the slightly underdeveloped screenplay aside, the movie is extremely well-produced. Wu is wonderful in the lead role, bringing a slightly unhinged energy to a role that’s largely thankless, where she might have to jump from one emotional state to the other – much like her character in the film – and she massively sells it. In front of the camera this is her show.

And looking at it technically, the film is very competent. Midi Z uses camera tricks, colour palettes and light to maximum effect, repeating visual leitmotifs and altering the continuity slightly to keep the audience on their toes. The sound design is truly excellent, emphasising the tensions with simple, repeating noises like bubbling kettles or industrial machines. It’s made to be unsettling, and does a great job of it. You’ve probably guessed by now that this is a very uncomfortable movie to watch, which is very much the point. If you like the films of Darren Aronofsky you’ll get a kick out of this.

Sure, Nina Wu is the sort of picture where the audience does a lot of work, but unlike lesser films of its ilk, this one is on purpose. You’re meant to wonder if a scar had been there in a previous scene. Much like Black Swan and the previously mentioned Perfect Blue, Nina Wu uses the in-film medium to confuse the audience. Are we watching a scene from the film-within-a-film, or reality? The story might be lacking in certain places, but it’s a small bump in what is an otherwise very-well made film. Let’s just hope none of the actors suffered like Nina making it.

Verdict: Loaded with good performances, Nina Wu is a tense and gorgeously made look at the price of fame.