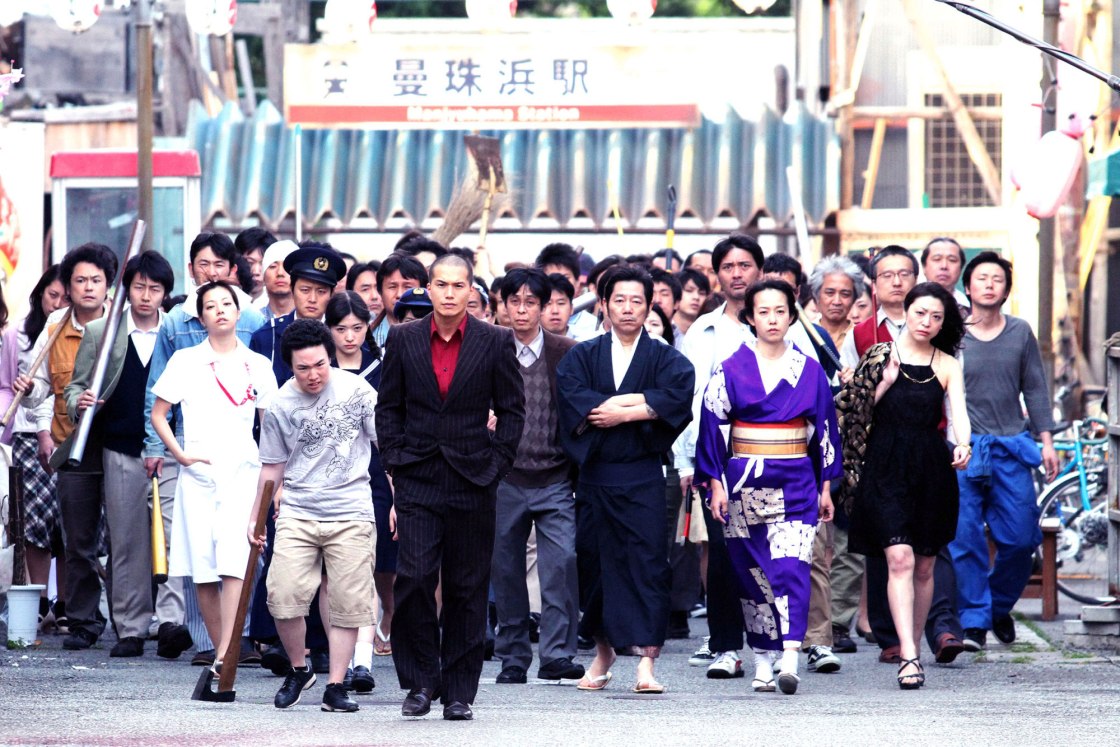 “Take my blood… And walk the path of… a yakuza vampire!”

I feel like it’s been a while since we got a really good, classic Takashi Miike film. Having been introduced to the majority of Asian cinema through the wonderful, low-quality yet lovingly put-together Extreme releases from Tartan, his films popped up quite a lot. With a few exceptions, they tended to be singularly peculiar, often violent and always strikingly unique – and almost always featured the yakuza in some form of another. In recent years, his focus moved more towards manga adaptations, but every so often he’d come out with a gritty horror or something which reminded us of his heyday.

But it wasn’t until 2015’s Yakuza Apocalypse that we got something that really brought us back. The film deals with Kageyama (Hayato Ichihara), the second-in-command to benevolent and beloved mob boss Kamura (Lily Franky). Kamura has a secret, however: he is a vampire who feeds on his own men over members of the public. However, as yakuza apparently neither taste good nor provide nutrition, he is forced to chain them in a room and force them to revert back into Good Upstanding Citizens. However, when he is killed by a gunslinging priest (Ryushin Tei), he bites Kageyama, starting a string of vampire bites throughout the town.

I skipped a lot in that plot recap. There’s a lot going on with a yakuza captain with goo coming out of her ear, and a “modern monster” that’s set to arrive at some point. If you’re looking for weird, this won’t disappoint. On this note, Yakuza Apocalypse has maybe a little too much going on, and this looks like the result of an over-ambitious Miike who now has the money and means to get crazy all the while keeping his new, polished blockbuster look. There’s no Riki Takeuchi or Sho Aikawa, and as much of a shame as it is to see them replaced, Miike is now able to look elsewhere for his crazy character actors.

Most notable of these – cameos aside – is probably the choice to bring in Indonesian actor and martial artist Yayan Ruhian as the priest’s sidekick. Named Mad Dog after his character in the Raid movies, Ruhian brings the same wild fighting style from those films as he moves with reckless abandon and brings that manic energy to inject life into some of the slower scenes of the movies. Not to say the rest of the cast don’t bring it – and when Masanori Mimoto comes in dressed as a frog, you know you’re in for a ride – but it’s great to see Ruhian steal the show.

Fans who have come to Miike from his more Western mainstream films like Blade of the Immortal or the newly released First Love might be a bit thrown off to see something like this, and I’d understand why. His style has mellowed a bit in the last few years and his films are more accessible than ever, but it’s good to see him mess around with the sort of lunatic ideas that made him the cult icon he is. Like I said above, his budget – while not on an Avengers level – has risen, and it’s allowed him to play with some sillier ideas, bigger fights and more extravagant CG (well, to an extent).

Unfortunately, he’s as prone as ever to occasional overindulgence – not that any of this isn’t on screenwriter Yoshitaka Yamaguchi, and it shows here more than ever. Some of his ideas would have been better served in another movie: the stuff featuring the frog, and the goo and the yakuza kappa would have made for a very entertaining yokai-themed crime film by itself. Yakuza Apocalypse could have very easily been a film about the yakuza fighting vampires and nothing else, and probably could have come out quite good.

As it is, it’s fairly overblown but it does result in a film that’s at least very strange, and in a good way. It’s easily his oddest film since his masterpiece of strange Gozu back in 2002, but while that movie was purposefully crafted to emulate a dream-state and a sense of estrangement, Yakuza Apocalypse feels crazy for the sake of crazy. At just under two hours it runs the risk of overstaying its welcome, but thankfully never feels like it’s too much. But it definitely toes the line. If you enjoy movies like Dead or Alive, you’re definitely going to get a kick out of this.

Verdict: Filled with his trademark humour, hyperviolence and out-there ideas, Yakuza Apocalypse is a showcase of the best and worst of Takashi Miike