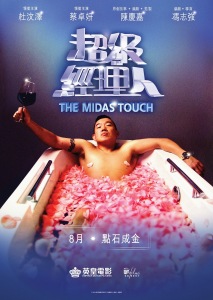 “We’re really cheap, but better than being nobodies!”

Chapman To is no stranger to the ups and downs of Hong Kong’s entertainment industry. He’s gone from quirky character actor to writer-director to leading man, and his criticisms of mainland China has caused rifts between him and several high-profile names in both Hong Kong and China (including, of all people, a rather obnoxious Wong Jing), resulting in his career being largely relocated to Malaysia. This is not to mention his experience in working in movies like Vulgaria, which specifically lampoons the entire trade. And then there’s Charlene Choi, his co-star in this film. Having started her career in a crazy-successful pop group and having since moved onto movies, Choi has also experienced a number highs and lows, from her time in Twins to supporting her collaborator Gillian Chung’s turbulent times during Edison Chen’s infamous leaked photos scandal.

In many ways, they seem pretty well-equipped for their roles in The Midas Touch. To plays Mak Chiu, a money lender who attempts to collect a hefty debt from a talent agency. While there, To is introduced to the agency’s seven aspiring idols and, taking pity on them, chooses to take over their management in lieu of payment, dubbing the group Oh My Girls. He however quickly realises that he’s in way over his head and, with money quickly running out, decides to hire professional manager Seun Meimei (Choi), who has recently lost her client, superstar J-Dragon (Gao Yunxiang), for being a creep and perving on him. Together, they attempt to make huge stars of their young hopefuls, while facing the many pitfalls ahead of them.

Despite all my chatter above, The Midas Touch isn’t really a satire. In fact, it’s not really trying to be anything. It’s set in the world of entertainment, sure, but it very happy settling for a more shallow – if no less sweet – story about a guy who just wants to do what’s best for the group he’s inherited. The strengths aren’t in the form of sharp observations about the state of Hong Kong cinema or cantopop or anything like that, but in the cast (and, as expected for this kind of film, its many cameos, most of which will be there for promotional reasons over anything else) who succeed in turning a samey story into something that was ultimately not half bad. Choi come across like an early Maggie Cheung, for better or worse, which partially helps diffuse the inherent grossness of her one-way mirror.

Writer-director Chi Keung Fung (also credited as Andrew Fung, depending on where you look) plays his cards right by treating not only Choi and To’s characters like real people, but also the girls who are introduced one by one and are allowed to show off their funny sides immediately. This happens fairly early in the movie, and allows us to get to know them as individuals and not just as a collective piece of eye candy. Sure, it still mostly treats them as one entity, but that seems to be for the sake of streamlining the story. They have enough scenes by themselves and unique traits for them to feel like individuals when it matters.

It’s not like The Midas Touch is trying to be high art, but I appreciate that it doesn’t always take the easy route. Sure, there are plenty of jokes that will get a groan over a laugh and the story has a habit of going nowhere more often than not, but at least it’s charming throughout (you know, when it isn’t being gross and weird), and gives the seven girls personality and the ability to kick the asses of anyone who gets too creepy. In fact, I’d like to give it props for never stooping low as to degrade these young women – which is all too often too easy for these movies – and for having Mak and Seun act like protective parents, who only want the best for their seven goofy kids.

OK, I’ve praised The Midas Touch quite a lot, which probably comes more from my low expectations of what it could have been rather than what it was. It comes with a few flaws, most obvious of which are the movie’s somewhat low rate of actual laughs. When the jokes come in, they tend to be pretty decent but more often than not they’re few and far between with sporadic moments of fairly weak drama pushing the story forward. Thankfully the overall concept and the cast keep everything held together, and it’s all competently put together, so you’re still having a good time but it really could have done with a script revision or two.

That might have also helped with cleaning up the film’s padding and filler which bloat the story in places where it doesn’t need to. Once again, it’s not enough to turn The Midas Touch into a bad film but there are moments where your investment to the characters will be tested, when they go off on another weird tangent that doesn’t really amount to anything. The decision to tell the story in flashback form as Mak sits in a Korean jail cell for chasing after a pickpocket is a little pointless, but at least we get to see Gillian Chung as a police officer. Still, Fung and his cast are able to turn a pretty rote premise into a sweet story of a manager trying his best to do what’s right for his stars. It’s a very likeable film that coasts by on its innate charm, but sometimes that’s good enough.

Verdict: It might not always know what it wants to say or what it’s doing, but The Midas Touch is a sweet film that is palatable by never being too saccharine.

Overall entertainment: 6.5/10
Violence: 1/10
Sex: 2/10 – but points for restraint
Awards season: A Gibberish is an award I’d like to receive
Brotherhood of the travelling pants: Is a thing, apparently
In media res: Unnecessary
English title: Pretty awful, but the Chinese one isn’t much better