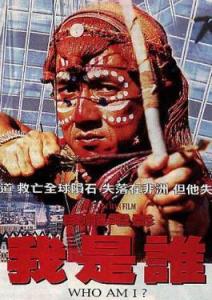 Jackie isn’t the only one aimless in Benny Chan’s silly 90s action-comedy.

There was an interesting period in Jackie Chan’s career when, while trying to transition from Hong Kong to Hollywood, he starred in a few English-language (but otherwise fully Hong Kong) movies. They were usually dubbed, set abroad, and featured international stars … although stars might be a bit generous a term. In 1997, he and long-time friend Sammo Hung collaborated on Mr Nice Guy and the success of the film abroad allowed Jackie to not only star in his international breakthrough film Rush Hour, but also make more English-language HK movies, this time with Benny Chan. The result: amnesia-action-comedy Who Am I?

Jackie Chan plays … I think it’s a character called Jackie Chan. For most of the film he’s going by the name Who Am I, which he is dubbed by the African tribe who rescues him after a military plane he’s in crashes, causing Jackie to lose his memory. I’m not going to call him Who Am I, because that’s stupid, so for the rest of the review I’ll call him Jackie. After spending time bonding with the tribesmen and learning how to suck venom from wounds, Jackie befriends a rally navigator named Yuki (Mirai Yamamoto who leaves the film far too early), and immediately becomes famous by accident. His new fame draws the attention of the corrupt military men who were behind the crash, and who chase him, as well as mysterious but unbelievably adorable reporter Christine (Michelle Ferre).

Structurally, the film is a bit of a mess. The opening five to ten minutes are a flurry of moments designed to explain the basic premise, and while that’s normally fine and often encouraged everything here is so hurriedly explained that you don’t have time to digest all of the information. There are special armed forces, kidnapped scientists, weird bulging CGI canisters and the reason any of this is taking place in Africa to begin with. It also undoes the film’s biggest and most compelling angle: to have the audience just as in the dark as Jackie is throughout.

I understand there are a number of different versions of Who Am I, so perhaps this is only a regional issue, but knowing what Jackie was up to and how his plane crashed really does take away from what would have been a pretty exciting story, and could have done what the Bourne films did five years before Paul Greengrass. Either way, the storytelling is somewhat shoddy and probably drags the film on longer than it needs to. Sometimes it feels like it’s going on too long, but then there are moments that just whizz by. Pacing is definitely not this movie’s strong suit.

Whatever. Who cares. This isn’t a thriller, and it never tries to be. Like many of Chan’s middle-of-the-road films, Who Am I isn’t exactly going for complex storytelling, but rather as a skeleton for prop-based violence and slapstick martial arts. And … yeah … I mean, it’s definitely there, there’s no denying it and some of it is actually very good. Somehow the pace of action seems a little toned down, with no real good stunts until the twenty minute mark, and even afterwards the fights are distant. It’s a relief, then, that they at least show the same level of creativity we’ve come to expect, with clogs and pianos and rooftops used very effectively. There’s even a pretty great car chase, with the obligatory fruit stand chaos. The final clash when the bad guys and Jackie are fighting in order to grab a jacket is about as entertaining as you’d expect.

In a lot of ways, this period of Chan’s history marks the turning point for him, and Who Am I feels like the perfect encapsulation of that time – a blend of old Hong Kong and the New World. Who Am I is almost a statement by Chan, who is about to be dropped into a wide-appeal international market and whose values are about to be challenged and thoroughly changed (although perhaps he’d have done better by looking at how Mainland China would change him instead). Are the corrupt officials a metaphor for Hollywood producers? At one point, a camera is a gun – another metaphor, perhaps. It was the same year that Chan released his autobiography I Am Jackie Chan, after all, and maybe this is why the character shares his name. Or maybe I’m thinking just way too deeply about this. It’s Who Am I for crying out loud.

Verdict: Fun, loud, but a bit slipshod in places, Who Am I? is still a decent action romp across Africa and Europe.

Overall entertainment: 6.5/10
Sex: 0/10
Violence: 3/10
Kung-Foolery: 7/10
Africa: A bit bigger than Washington
Literal idioms: That guy literally put that note in his pipe and smoked it
Jackie Chan, Environmentalist: “Respect nature,” he says, before throwing a floppy disk into a river.