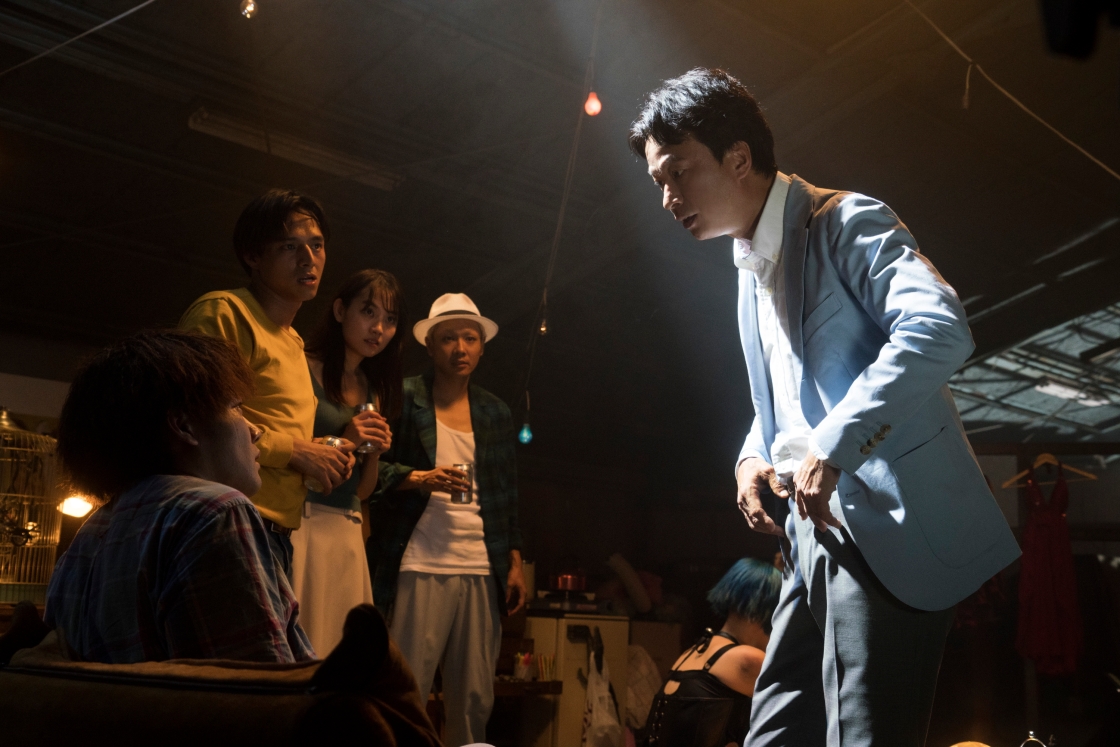 The Forest of Love

In 2002, serial killer Futoshi Matsunaga and his accomplice Junko Ogata were arrested for the kidnapping, torture and murder of seven people. Their crimes were apparently so brutal that at the time, the Japanese media refused to go into detail, initially just referring to the kidnappings. The stories are on Wikipedia, I’m not going to elaborate further here. This is a review site, after all. Anyway, it was extremely grizzly, and said to be one of the most atrocious crimes in modern Japanese history. So, naturally, Sion Sono went and made a film based on it.

At some point in the mid-90s, aspiring filmmakers Jay and Fukami (Young Dais and Dai Hasegawa) as well as their friends Taeko (Kyoko Hinami) and Shin (Shonnosuke Mitsushima), find their lives entangled with that of charismatic fraudster Joe Murata (Kippei Shiina) after Taeko’s shut-in school friend Mitsuko (Eri Kamataki) becomes romantically involved with him. Mitsuko and Taeko haven’t spoken much since high school after a number of traumatic events surrounding the cast of their performance of Romeo and Juliet tore them apart, and the pain clearly hasn’t dulled in the intervening years.

Joe Murata (Kippei Shiina) is more than a con man who defrauds women, though. His attitude towards people is awful, treating people (but mostly women) like shit, beating them down until they become entirely dependent on him. He has no scruples about sleeping with whoever he wants, even the sisters and mothers of women he’s engaged to, and Taeko has already had first-hand experience with him. Knowing the danger, she gets closer to Murata to protect Mitsuko, and the film crew – who believe him to be the serial killer the news has been talking about – come along to film a sort of docu-drama about this man.

And then things start to get completely insane. Murata’s completely dominating, ruthlessly cruel presence warps the minds of everyone he comes into contact with, and Forest of Love is like watching a cult leader mould the minds of his followers, encouraging them to do increasingly terrible things, until the inevitable, terrible climax. Except Forest of Love doesn’t really have one. Well, rather, it has about three climaxes, with characters coming and going throughout the story and the central focus changing up every so often. It’s a curious choice that makes the film feel a touch longer than it is – and at 150 minutes it already feels pretty long to begin with – and gives you the impression that you’re actually watching a TV show. That it was released in 2020 as a mini-series titled Forest of Love: Deep Cut is pretty telling, and it’s easy to see how it might have been originally been conceived as such.

The film’s various episodes explore two central themes – which seasoned Sono viewers will have no doubt spotted in many of previous works. During the first half of the story, throughout Murata’s initial manipulation of Mitsuko, and Taeko’s attempts to protect her, Sono explores the exploitation of women by powerful men as well as the vicious cycle of abuse seen in certain relationships that prevents them from seeking help. Murata’s presence is a touch over the top – as no one goes into a Sion Sono film expecting subtlty – but it might be the excessive wake-up call some of the more oblivious members of society might need when it comes to spotting real life abuse. This bleeds into the second theme a bit. When Murata infiltrates entire families, or takes over the film crew and incites violence in a bank, Sono shows us how quick a group of people can fall to a leader like Murata, and happily take the physical and mental torture he puts them through. Easy watching this is not.

Nevertheless, I’ll be damned if this isn’t really gripping at the same time. The star of the show has to be Kippei Shiina. Even during Murata’s most wretched moments, Shiina radiates charisma. It’s a testament to his abilities that even through the lens of a third party unaffected by Murata’s spell, it’s surprisingly easy to be drawn into the character. The rest of the cast isn’t phoning it in either, to be precise. Under the direction of Sono, whose directorial style never bars holds, it’s the cast who make this film as thoroughly unpleasant and uncomfortable to sit through in the best way. The roles feel real, and the madness that permeates every character that interacts with Murata seem shockingly genuine and upsetting in a way that Hollywood or movie insanity rarely does. Well, the Punk House episode might veer into the silly, but by that point in the film you’re ready for some goofy nonsense.

To say that The Forest of Love is a downer is putting it mildly, but as far as downers go, it’s pretty damn good. I can’t speak for the TV series but it seems like a good choice if you’ve finished Chernobyl and Mare of Easttown and are looking for something else to depress you, and the episodic nature of the story (broken up into Chapters) might make it work.I can’t imagine what was added to it to make it its total 4 and a half hour runtime – I think the film, while dragging in places, sells the story well, and moves you between chapters with enough skill that you don’t necessarily see the time go by. If you’re looking for a violent, unsettling time, that’s where you’ll find it. And if you can convince a friend to watch it under the title’s suggestion of a romantic drama set in the wooded countryside, all the better.

Verdict:  The Forest of Love is certainly a good time, but it’s not a fun time.