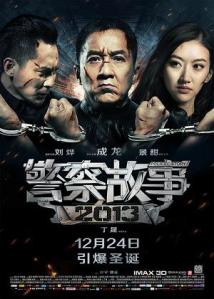 Police Story 2013, now known as Police Story: Lockdown is the latest installment in the surprisingly long-lasting series of films starring Jackie Chan as Sergeant Chan Ka-Kui … no, Inspector Chan Kwok Wing … no that’s not right either. Police Story, released in 1985, was a comedy crime film directed by and starring Jackie Chan as Sergeant Chan – it was a smash hit, and spawned three sequels, and one spin-off, before the series came to a stop in 1996 with Stanley Tong’s Police Story 4: First Strike. It was revived in 2004 with Benny Chan’s darker reboot of the series, the aptly titled New Police Story, but despite success critically and commercially, never spawned a sequel. The series stayed dormant for another 9 years, until Police Story 2013 was released in (you guessed it) 2013.

This film follows a traditional Hong Kong style of titling, which involves putting the year next to the original title and not coming up with any kind of subtitle or anything. It’s something I’ve never quite understood, but with films like I Love Hong Kong 2013, A Better Tomorrow 2012 and Chan’s own CZ12 , I’ve grown quite used to it. But here, much like CZ12 (I’ll get to that one in another review), 2013 doesn’t have much of a connection to the original series, the title seemingly only there to get people to go and see it, which certainly worked for me. While the first four in the series were energetic, funny, silly and action-packed, this one is slow, moody and altogether bleaker.

Jackie Chan plays Inspector Zhong Wen, a cop from Mainland China who goes to meet his daughter Miao Miao (Jing Tian) in the seedy Wu Bar, owned by her boyfriend Wu Jiang (Liu Ye). Wen disproves of his daughter’s lifestyle choices, especially her relationship to Wu, but before any of that can really get underway, he’s struck in the back of the head and the plot begins. From that point onwards the film plays more like an early Die Hard film – Wu takes everyone in the bar hostage, while Wen escapes to try to save the day. Even the plot about Wu demanding a prisoner be released sounds lifted from that series.

But where Die Hard and the original Police Story films were fun and kinetic, this picture moves along as a brooding pace, following a sad, tired Jackie Chan through tonnes of expository dialogue and the occasional brutal fight. The fight scenes in the film are good – even the most disappointing Chan film features at least a good couple of excellent fights – but don’t come in to the film expecting the same prop comedy style that’s become synonymous with Jackie Chan. This film features less punches, but each of them packs … well, a bigger punch and your enjoyment of this film will hinge entirely on whether you enjoy watching Jackie Chan get painfully wailed on.

Director Ding Sheng, who previously worked with Chan in the far wackier Little Big Soldier, does a lot with little, utilizing every inch of the futuristic-décor and warehouse-style architecture of Wu’s bar, giving us a claustrophobic film with genuine suspense. In fact, with the exception of a few flashbacks and a couple of exterior shots, the entire film takes place within this bar. Sheng’s use of colour presents us with a grim, modern setting that helps us disconnect with any previous notions we had of the film series and immediately establishes the tone the film is going for. The cast is good: Chan plays the downbeat, tired cop well and Jing Tian has enough range to switch between the two or three sides to her character, but it is Liu Ye as the main villain who steals the show. While there is no doubt from the second he strolls in frame that he is the bad guy, Ye gives us a nuanced performance from calculating villain to mad with grief and is captivating throughout.

Ultimately, your enjoyment of the film will depend on two things: whether you are comparing it to the old Police Story films, and whether or not you like watching Jackie Chan show his age. Sure, he can still blow us away with some incredible action, but roles like this emphasise that he is not the same person he was when he was falling over comically in Drunken Master. We’ve seen him act in more serious roles in films such as The Shinjuku Incident, where he excelled, but there’s still something wince-inducing about seeing him get the shit kicked out of him by someone younger, bigger and much more violent than him. It’s difficult to be too harsh about the movie that does a lot of things right.

In fairness to the plot, it takes several good turns, and the comparisons to Bruce Willis’ most famous franchise stop around halfway through, and the story begins to take its own form, much to its advantage. If you can ignore the title and the franchise it is associated with, it becomes much more enjoyable. This is a film that needs to be seen for what it is, not what it wants to be.

Verdict: Not quite the slow-mo kick in the face it feels like it should be, this film does better standing on its own