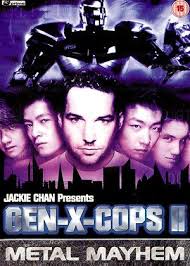 The future director of Rob-B-Hood, Invisible Target and Shaolin makes some bizarre visual and casting choices to bring us a film that’s more Scrapheap than Metal Mayhem

“You guys broke laws we don’t even have yet.”
“Keep flapping, dickhead. You’re the ones going to the bamboo Alcatraz.”
“For what, illegal diving? Refusing to bleed?”

This is a sample of the dialogue you can expect from this baffling series of choices masquerading a film. Benny Chan’s direct-to-TV Sci-Fi Channel sequel to Gen-X Cops (a film I have never seen and have never seen available in any format), Gen-Y Cops, better known as Jackie Chan Presents Gen-X Cops II: Metal Mayhem, is more a study in pre-stardom film choices and terrible CG than it is an actual movie.

OK, so maybe that’s being a little bit harsh.

The movie opens with the reveal of a new crimefighting robot, the RS1, created by computer genius Kurt (Richard Sun), which is due to be introduced at some World’s Weapon Convention. The machine and its scientists are being guarded by three FBI agents (Paul Rudd, Mark Hicks and Maggie Q), when the RS1 goes haywire and goes on a killing spree. The FBI see undercover Hong Kong cop Edison (Edison Chen) apparently at the controls of this, and go after him. Our two heroes, cops Alien and Match (played by Sam Lee and Stephen Fung, respectively), join forces with him and try to prove their innocence, while trying to stay out of the FBI’s line of fire, and before the robot can be unleashed elsewhere.

Jackie Chan’s name is attached to the project in much the same way Quentin Tarantino was attached to the DVD release of Hero. He had nothing to do with the film, but someone threw his name on the front to better attract a western audience. However, what’s more baffling is that Jackie’s name appears in the credits first, before anyone else. It’s never expanded upon, nor is his role ever explained. But maybe it was enough to get people to buy it. It isn’t, however, the reason I did.

The biggest draw for Gen-X Cops 2: Metal Mayhem, which will now be called Metal Mayhem for simplicity, is the casting, the most interesting is Paul Rudd, who plays the unbearably dickish Agent Ian Curtis. Rudd sports a terrible blonde dye-job reminiscent of the worst NSYNC video and seems to have left his acting chops back in the States, and is a reminder of just how much better a comedic actor he is. With him is Maggie Q, who is far less uncomfortable to watch, but still a million miles away from where she’ll be in Nikita.

Benny Chan seems a lot more comfortable directing the Hong Kong stars, however, and Chen, Lee and Fung all fare a lot better, and definitely seem more at home in the roles. Lee and Fung, specifically, are having a lot of fun and their back-and-forth is one of the more appealing parts of Metal Mayhem, although that isn’t saying much, really. Also in the cast, and with twenty seconds of dialogue, is Anthony Wong, who will later co-star with Chen in the much better Infernal Affairs films and Initial D, who plays Dr Tang, an “expert in robotics and spy plane technology”. His role is perfectly serviceable.

This film couldn’t be more dated if it tried. With choice phrases like “get real” thrown around everywhere, heavy use of fish-eye lens and awkward close-ups, and an emphasis on gritty, metallic neo-Matrix set design, it fully cements itself square in this three-year period of time around the turn of the century when film was especially ugly. Every other set is an abandoned warehouse, every other shot is a Dutch angle.

Metal Mayhem lacks any kind of charm, and instead packs a ridiculous premise full of embarrassing CGI shots (there is a scene near the end where a large explosion under water, and it might be one of the worst pieces of visual effects I have ever seen, see the screenshot above), with some action scenes placed here and there to break up the film a bit better. Not to say its short running time doesn’t feel like an eternity.  The novelty of watching a bleach-blonde Paul Rudd chew scenery in a film laden with terrible robots vanishes after about twenty minutes and you’re left with another hour that just seem to stretch on much longer than a film about killer robots in Hong Kong should be.

But it’s not entirely unwatchable, and this is due largely to the action scenes which, as is typical with Benny Chan, are still pretty good. They’re standard fare, offering nothing majorly new, but are still exciting, energetic and give Metal Mayhem a much needed jolt.

Verdict: In the end, Metal Mayhem is a bad showcase of the sort of work Benny Chan and the cast can do. There are countless better films with the same talent. Watch it for Paul Rudd and the terrible effects, then turn it off after ten minutes.