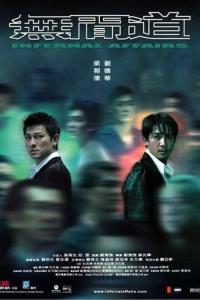 “What thousands must die so that Caesar may become great.”

The early 2000s was a pretty bleak time for Hong Kong cinema. Cinema attendance had been dropping steadily since the 80s, and more and more frequently, Hollywood was dominating the box office. The 1997 Asian financial crisis had hit the film industry pretty hard and to top it off, 2003 was the year Hong Kongers lost legendary stars Leslie Cheung and Anita Mui. In short, things weren’t looking good.

There was still hope in the form of the comedies of Stephen Chow (still solid at the box office and a critical darling), low-budget J-style horrors like The Eye and small-scale dramas and comedies, such as the ones by Wong Kar-Wai which featured such stars as Andy Lau and Tony Leung. In 2003, in an attempt to revitalise local cinema filmmakers Andrew Lau, Alan Mak and Felix Chong took some of the biggest names working, wrote a tight, concise script and filmed what they hoped would be the burst of energy and quality moviemaking Hong Kong needed.

The result is what has been translated as Infernal Affairs (the Chinese title references the lowest level of Hell in Buddhism, thus our Infernal bit). Tony Leung and Andy Lau star as Chan Wing-yan and Lau Kin-ming, respectively. Chan has been undercover in the Triads for ten years, currently working for boss Hon Sam (Eric Tsang) and the strain is causing him one hell of an identity crisis. Lau is his mirror image: a Triad who has infiltrated the police, rising through the ranks and gaining everyone’s trust, especially SP Wong (Anthony Wong), the only man who knows Chan’s identity. When a drug deal goes awry, it becomes apparent to both teams that there is a mole in their ranks.

So begins a game of cat and mouse, with each mole desperately trying to uncover the other before their identity is blown. This plays havoc with Lau’s life, as he is currently trying to settle into a normal life with girlfriend Mary (Sammi Cheng), and is beginning to wish he could get out of the game and start fresh. Chan has less bliss in his life, and the only place he can sleep is in the chair of his psychiatrist Dr Lee (Kelly Chen). As tensions heat, both sides grow increasingly frantic, and Lau is placed in Internal Affairs specifically to track down the mole in the department.

The story is pretty simple enough: it’s something we’ve all seen on several occasions in Hollywood undercover-cop movies, but it manages to get a lot out of a straightforward premise. Screenwriters Alan Mak and Felix Chong keep characterisations simple where necessary, and let the natural charisma of the actors take over. Tony Leung has one of the most sympathetic faces in cinema, and he portrays his inner struggle with immense sincerity. You feel the pain and the crisis he is going through, as well as his desire to be just a normal policeman. He’s been beaten and thrown around by both sides, and feels like a man without an identity. On the other side we have Andy Lau, whose angular look gives him a cool, calm persona perfect for the role. What’s interesting is how it’s Lau who becomes the centre of the film, with his decision to become a good man becoming the central conflict, but it’s all part of the twisty-turny way the narrative is written and works with the idea of what would happen to you when your whole life is a lie. Both characters are struggling with the same concept, only in completely different ways.

Over in the supporting cast there’s Eric Tsang and Anthony Wong, two more box office favourites. Tsang is, of course, known for playing stooges and comedic punching bags so his turn as Hon Sam is both surprising and quite intimidating – one of the breakout performances in a film absolutely crammed with them. His small stature and usually affable face do nothing to belittle the intensity with which he delivers his lines and as a result, Sam becomes a more complex villain who is nevertheless someone you don’t want to mess with. Wong’s performance is more subdued, but equally memorable. His father-figure role acts as a crutch for Chan, and he has quiet, but noticeable chemistry with his man undercover. We also have the two female supporting characters who don’t do loads here other than repeat themes we already know. Chen and Cheng are both fine, if somewhat forgettable but that’s the script’s fault more than anything else. We also have Chapman To as a fellow Triad, who is as good as anyone familiar with him would expect.

A minor point: sometimes everything does feel a bit hammered in. Mary’s unfinished novel happens to mirror what Lau is going through, with Mary often repeating that she doesn’t know if he’s a good guy or a bad guy. Subtle. Elva Hsiao appears in a glorified cameo, as Chan’s ex – a remnant of a life he once could have had. But thankfully, those moments are few are far between, sandwiched between much more believable character interactions and great, tension-filled scenes. It’s standard HK film fare, though, with the black-and-white slow-mo for sad scenes and often repeated flashbacks to pivotal moments; it’s all stuff you come to expect from these movies. Still, Lau and Mak get some great mileage from it, using what they know to their absolute advantage

It’s a good job that it often transcends the norm, and most notably never resorts to bloody, quick-fire action scenes to speed things up and this is a really clever choice from a director known for quite the opposite, and gives Infernal Affairs the edge to stand out from what would be another typical cop film. There’s one gunfight, but it’s mixed in with a black-and-white sadness sequence so it hardly counts. Here, the excitement comes from the will-he-wont-he tension that builds gradually throughout, climaxing in a thrilling and nail-biting rooftop confrontation. The two moles cross paths often, never knowing who the other is until  this critical point in the movie. It’s the thrill of the chase that keeps this movie’s blood pumping with two moles trying to stay alive, and two chessmasters playing ruthlessly behind them. As the story culminates in several scenes of emotional complexity, the characters face sides of themselves they’ve hardly seen, and the film visually plays along. Andrew Lau’s filming is great, and the cinematography contrasts the dark, neon-lit underbelly with the bright, sunlit world of the police.

In the end, Infernal Affairs is the jolt the industry needed. It was proof that a good, even great film could become a huge box office smash with only a solid story, good camerawork and an excellent cast. It brought HK cinema to the Western mainstream, letting foreign audiences know that the country had more to offer than martial arts movies. It’s not perfect – which movie is? –  but the blend of deep and convincing characters with some of the best tension I’ve seen in any film makes for a favourite of mine, and plenty of Hong Kong’s crime film fanatics.

Verdict: The perfect mix of tension, character moments, cinematography and soundtrack, Infernal Affairs is a prime example of HK Cinema doing what it does best