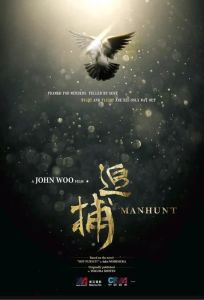 John Woo returns to the genre that made him famous. But is it a return to form?

Does anyone not wanna kill you?

It’s been a while since we’ve seen John Woo – gun fu auteur and screaming Nic Cage enthusiast – make a Hong Kong-based present day action film. After returning from his decade in Hollywood and bringing to us the fantastic Red Cliff double bill, he continued making period epics with Reign of Assassins and The Crossing, which also consisted of two films. There were rumours of him returning to his Heroic Bloodshed roots for a while, and after legendary actor Ken Takakura passed, Woo announced he was adapting the novel Kimi yo Fundo no Kawa o Watare into Manhunt there was a lot of buzz and excitement.

Zhang Hanyu plays Du Qiu, a Chinese lawyer working for Tenjin Pharmaceuticals in Japan. At a party celebrating a potential new drug, his boss Sakai (Jun Kunimura) announces his son (Hiroyuki Ikeuchi) will be taking over development. Du goes home drunk, and wakes up to find a woman from the party in bed with him, deceased. Immediately, the cops show up, and Du goes into panic mode, becoming a full-fledged fugitive. On the case is hotshot detective Satoshi Yamura (Masaharu Fukuyama) and his assistant Rika (Nanami Sakuraba), but they aren’t the only ones on Du’s tail. Two assassins (Ha Ji-won and Angeles Woo) are hired by Tenjin to take care of lawyer. Du must try to clear his name, all the while uncovering a massive company-wide conspiracy.

Those expecting something with the emotional resonance of A Better Tomorrow or the tight plotting of The Killer will be largely disappointed. Manhunt starts out promisingly enough with the frame-up, the company conspiracy and the crooked cops. But then it slowly devolves into madness as Du Qiu learns (spoilers? I guess?) that the pharmacy is developing some kind of super soldier serum that also turns people violently insane. The third act of the movie feels like something from a totally different story to the taut cat-and-mouse thriller you were likely hoping for. John Woo is best when his gunfights have a deeper meaning to them, and aren’t just pointless shootouts. This one just sort of has a Face/Off vibe and not in a good way.

My biggest problem with the film is just how filled to the brim with contrivances it is. The two assassins prove to be largely useless during the entire movie, and it’s purely because of a completely coincidental scene from the cold open when the sisters met Du Qiu at a bar and one of the sisters somehow fell immediately in love with him. This changes the direction the movie takes on such a fundamental level that it’s frustrating they had to resort to such a dumb set-up in order to make this work. The film is littered with moments that only exist because the script demanded it; and with a whopping seven writers – not counting the original novel and the first adaptation this is based off – it’s easy to see how this film became the jumbled mess it is now.

What makes the movie watchable and often enjoyable even during its most silly scenes is the wonderfully diverse (for a Hong Kong film) cast, who all put a tonne of work into each moment. Zhang Hanyu manages to carry the film for the most part, and is only overshadowed when Fukuyama’s Detective Yamura swaggers on screen. The sisters Dawn and Rain are also wonderfully charismatic, as are father and son villain team Jun Kunimura and Hiroyuki Ikeuchi. Of course, even this isn’t without its flaws as the characters spend a huge portion of the movie talking to English to each other and … well, it’s about as good as you’d expect. It’s tough to slight the actors on this, but it really feels like they memorised their lines phonetically and the whole thing becomes just a bit too dumb to take seriously. I get that the source material is Japanese, but there was no real reason not to move the action to Hong Kong and have the whole thing be in Cantonese or Mandarin.

Oh well. I put this film on because I saw that it was a John Woo action thriller, and it delivers on that promise with some excellent action sequences including a well-choreographed battle against assassins on motorcycles, a speedboat chase and a pretty epic final battle number. All of it is shot with love and panache by a director who knows what he’s doing and isn’t afraid to go a bit Expendables on us. If it had been like his classic earlier work, all the better, but I was not really expecting anything like it. Would it have been more interesting has it a more focused storyline and less terrible English language acting? Definitely. But despite its flaws the story holds up and it’s clear that Woo is having a blast directing. It’s a squarely middle-of-the-road film that will entertain in the moment, but despite its weirdness, leaves you hollow and unsatisfied once the credits roll.