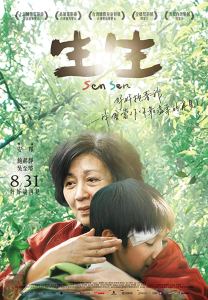 “My time is coming up upon me. And I don’t know what to tell you for your future.”

Sen Sen is named for Sen, a young boy living with his mother. His brother has recently passed away, and he spends his time away from home, on his brother’s phone, going through his files in order to understand him. He sees that his brother had subscribed to a video channel of an older woman named Lili, who is documenting her life in a live stream. Lili is something of an internet celebrity, known for her jovial attitude and love for life. Sen starts to find solace in the stream, and the two accidentally meet in a comic book store Sen frequents, and where Lili places her own self-drawn manga into the shelves.

It might be a touch evident by now that Sen Sen’s plot doesn’t really kick in for a good half an hour, and even then it’s sort of a non-story. The two naturally become quite close, with one filling a particular role the other might be missing in their life. At its heart, this is a film about life in the vaguest sort of way: hell, Sen’s name (and the film’s title) is literally just the word life twice. It’s about two people at the extreme ends of their lives, who are dealing with death, or the inevitability of it. Lili copes with the cancer by pretending it doesn’t exist, and by living the best life she possibly can. Sen, on the other hand, sits in a KFC and wonders who his brother was taking selfies with.

Coping with death is a universal theme and director Bon Am touches nicely upon it without it being too heavy-handed. Would Sen Sen work well if neither Lili had cancer nor Sen’s brother had passed away? Hard to tell, but these sorts of friendships in movies work best when there’s a lot of baggage. After all, storytelling is all about the arc, and both Sen and Lily have a lot to process emotionally at the film’s starting point. I won’t go too deep into whether or not they reach that point by the end, but what works is that the script doesn’t try too hard to force a happy ending, or an extremely satisfying one. It works more like real life that way, for better or worse.

It’s a nice touch on the part of the filmmakers is that we don’t learn too much about the unnamed brother. It’s almost as if the script respects Sen and his mother’s privacy and never delves too much into their lives. This breaks a bit from the norm, as we expect in these sorts of stories for the audience to get emotionally invested in the character’s past and sympathise with them. Here, that doesn’t really happen. Instead, it’s like we join both Lili and Sen at the moment they get to know one another, and we’re along for the ride.

Bon Am’s film doesn’t really have a tonne to say, but that’s not a problem. It doesn’t do a tonne of work trying to explore the relationships between mothers and their children, but it does offer two different perspectives: from Lili’s daughter – a successful shoe store owner who constantly frets over her mother and invites her to stay, and from Sen’s single mother, who works nights in a 24 hour convenience store. There’s no doubt the characters all clearly love each other, but something in Sen and Lili’s friendship seems to overpower that.

Sen Sen is hardly the most powerful film I’ve seen at the London East Asian Film Festival, and its quiet subtlety might not be its strongest asset. It’s actually been difficult to remember specific scenes from this, as none of it really leaves a huge impact. Instead, you remember how you felt during certain moments, which – sometimes – might be just as good as the moments themselves. That and the chemistry that the two leads share, which is understated in a very sly way. In the end, this is a sweet film that doesn’t overstay its welcome, but it might lack a bit of bite because of it.

Verdict: Not as touching as other films of its ilk, Sen Sen nevertheless is still a charming good time.

Director: Bon Am
Writer: Bon Am