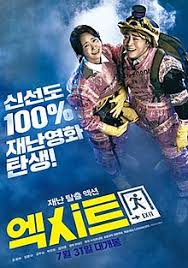 The London East Asian Film Festival has, since its inception in 2015, been my favourite of the myriad festivals this fine city has to offer. Now in its fourth year (technically fifth), LEAFF returns on the 24th of October, kicking things off with Lee Sang-guen’s disaster action comedy EXIT, which nicely fits in with this year’s theme of chaos, survival and crisis. From there, the festival will run eleven days of films from eleven countries, including North Korea making a welcome return from last year’s successful Comrade Kim Goes Flying.

I’ll be touching upon the programmes in a bit more detail during the festival, but a quick glance at the ten strands this year shows us that North Korea will have a spotlight shone on it with two films this year: The Story of our Home and A Broad Bellflower, starring two of North Korea’s biggest stars. They’re not just there for the sake of it, though, but rather to complement the festival’s biggest showcase: the K-Cinema 100, celebrating a century of excellent Korean filmmaking.

This strand has been ongoing, with a screening of Under the Sky of Seoul having taken place earlier this year, as well as The Host last month. This October, they’re looking ahead at the new wave of Korean filmmakers, including LEAFF competition Best Film winner Yoon Ga-eun, with her new movie Our House. We’ll also see this in full swing during this year’s London Korean Film Festival (but more on that in another post). LEAFF has always had strong ties to Korean cinema both through the support of the Korean Culture Centre, and from festival director Jeon Hyeyung who had previously worked for the LKFF.

This year’s Focus is on actor-singer Aaron Kwok, a guy whose music I am more familiar with than his films. In fact, the only one of his I’ve reviewed for the site was the worst film of this year’s Journuary – The Monkey King – but I expect that Port of Call and After This Out Exile will be much better, or at the very least show his talents in a more flattering light.

The usuals from the previous year: Stories of Women will look at desires and dramas that challenge women, the Competition will no doubt feature some excellent work from upcoming talent, and the hotly anticipated Official Selection, which I’ll definitely be discussing in more detail, will feature some of the best new films in Asia today, Kiyoshi Kurosawa’s latest To the Ends of the Earth and Thailand’s buzz-generating thriller The Pool.  Lastly, rounding things off we have a number of genre strands, including documentaries and samurai films. Lastly there’s a Horror Special which is a long-time coming because how can you celebrate Asian cinema without horror?

The official closing film has yet to be announced, but the festival runs until the 3rd of November, and I’m sure there’ll be lots more information by then. Get your tickets here.