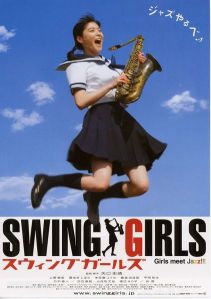 A group of lazy schoolgirls find passion in big band music, of all things, in Shinobu Yaguchi’s comedy.

“There are two kinds of people in this world. People who swing, and people who don’t.”

It’s summer in Japan. Temperatures are sweltering, and the last thing anyone wants to do is be stuck in a makeup class. This is true of Tomoko Suzki (Juri Ueno) and a dozen other girls in her class, and she jealously watches the baseball team and school band board a bus for a nearby game. There’s an opportunity to escape when a catering van arrives, too late to deliver the band’s lunches. Tomoko convinces her teacher Mr Ozawa (Naoto Takenaka) to let the girls deliver the bento boxes. However, they miss their stop on the train and have to walk back to the stadium. By the time they return, the lunches have spoiled in the summer heat, and everyone in the band gets food poisoning.

Well, everyone but cymbal player Nakamura (Yuta Hiraoka), whose lunch was eaten earlier by Tomoko. With no band, he figures out how everyone got sick, and threatens to tell on the girls unless they become the replacement band. Naturally none of them are sold on the idea, until they are. But when the regular recovers, a disheartened group decides that – screw it – they’ll make their own big band instead, called the Swing Girls (with Nakamura on piano). Shenanigans naturally ensure. 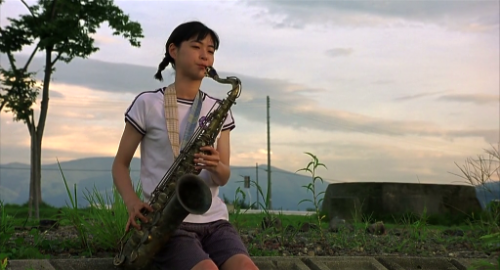 So, I know what you’re thinking. We’ve seen this underdog method before. Hell, we even saw it in director Shinobu Yaguchi’s previous film Waterboys, and yeah we have. End of review. And taken at face value, the film is very derivative of every sports comedy ever made (down to it being loosely based off real events). But a couple of things allow it to still feel fresh: for example, the girls aren’t really trying to prove anything to anyone – they’re just doing it because they gained a love for jazz, and the lack of antagonists allows for the character’’s failing to be the biggest hurdle to overcome. It’s not much, but those (and a few others we’ll touch on) do help make the film feel original. 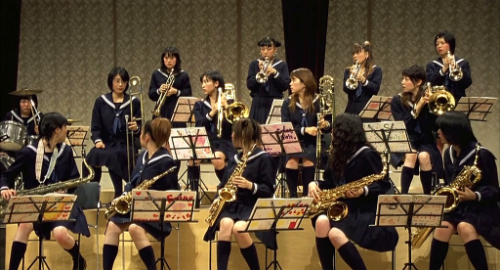 Some of the characters are interesting, as well, but when you’re dealing with a cast of this many, it’s difficult for everyone to get much screen time. Out of the seventeen odd members of the group, only about five really have any personality, with another two who are just there in a lot of scenes with their one character trait. That about half of them disappear for a good chunk of the movie certainly doesn’t help. The film is better when it’s something of a smaller affair, but the visual gag of seeing them all pile onto a handful of bikes and move as a swarm is good. 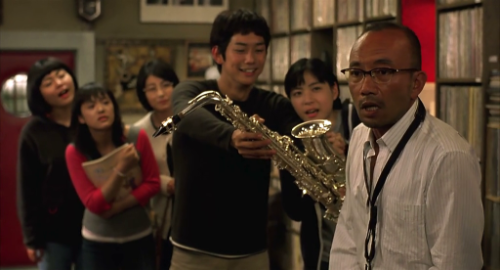 Rounding out the cast is genre favourite Naoto Takenawa who doesn’t play his typical kindly coach role – that part is relegated to Yutaka – but instead plays the girls’ maths teacher, who has something of a more miserly streak here. His character is actually one of the most developed, with a sad backstory to boot. He briefly encompasses that role (see Waterboys again, or Ping Pong) but it’s not really given much meat.

Swing Girls is best when it doesn’t try to really Tell a Story, with twists and stuff. It’s pointless, we’ve seen it before. It’s better when the scenes just sort of have fun, and lets the girls all run loose with their chaotic chemistry. Moments such as the band playing in a tiny karaoke booth, or the girls discovering the innate rhythm in a traffic light and marching down the street listening for other such rhythms are such charming scenes that the film could have been comprised of just those and it would have been great. It’s no game changer or anything, but it takes some well-known notes, and makes excellent jazz out of it.

Verdict: Swing Girls follows a familiar rhythm, but that doesn’t mean you won’t be tapping your foot.

Overall entertainment: 7/10
Violence: 0/10
Sex: 0/10
Best laugh: The entire scene with the boar
Rhythm: All on the off-beat
Take the ‘A’ Train: I swear if I ever hear that song again…
Big Band: Way better than regular ol’ brass. They have guitars!
Full band name: Swing Girls (and a Boy)