Godzilla’s animated trilogy has been disappointing. Can it end on a high?

“But we are not soup. We can choose who we devote ourselves to.”

So far, Godzilla’s first big foray into animation has been something of a letdown. The first part was somewhat promising, offering a post-apocalyptic setting with small number of survivors with limited tech facing the King of Monsters. The second film expanded on the lore a bit, and gave us the weird Mechgodzilla city as well as offer some interesting points of view, but did nothing but bring the mood down, and it left us thinking: so how are they going to finish this?

The movie picks up immediately after the events of City on the Edge of Battle. After the Bilusaludo plan to assimilate the planet into their mecha-city in order to defeat Godzilla fails, the remaining members of the alien race aboard the Aratrum demand justice for Haruo’s intervention. This doesn’t go too well, and the Bilusaludo cut power to the ship. But while things are bleak up there, things are worse on Earth. Many of the survivors of Mechagodzilla city have taken to faith to guide them, and the Exif Metphies takes this opportunity to become their spiritual leader, convincing them that they should summon the Exif god  Ghidorah to destroy Godzilla. As one might expect when bringing forth Godzilla’s most terrible enemy to Earth, things don’t exactly go to plan. 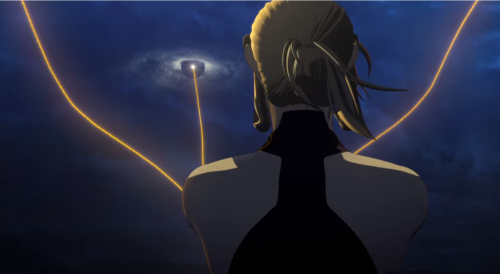 So despite the poster and the promos hinting at some sort of celestial combat between the two arch-nemeses, The Planet Easter actually is a lot slower and more contemplative than the previous two. The idea of making this more a battle of philosophies is certainly fresh, and continues the themes we’d already been exposed to a bit in the previous entries. In the last film we saw how the Bilusaludo’s ideas of human sacrifice for the greater good clash with Haruo’s, and in this one we get how Metphie’s ideas of … yeah, OK it’s a bit similar. However in between some boring scenes of the twin natives and the rest of the crew, we’re treated to some great character moments and a villain whose motivations are clear and logical.

This comes at the cost, though, of any decent action. The Planet Eater, despite its incredible title, might have the distinction of being the Godzilla film with close to zero action and destruction, save for one (pretty decent) moment when the glowing spectral Ghidorah first appears. That a Godzilla film can be this static – in animation, no less – is almost insulting. Ideas take the forefront here, fine, but at least have Godzilla obliterate his most famous nemesis before it fades into nothing. “He is fighting Ghidodrah!” characters shout at a Godzilla who’s just stood completely motionless. King Ghidorah hadn’t been seen on film since 2001 so this was an opportunity to really bring the character back with a bang. And it was … well, it certainly different. And pleasantly so, for the most part. 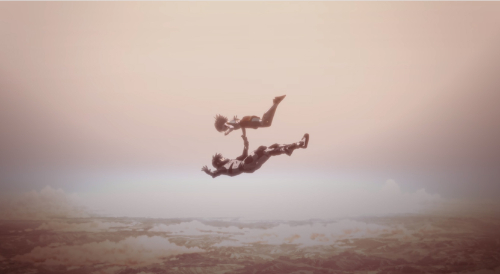 Of course, most surprising is that nothing actually changes by the time the credits roll. Much like the previous movie, things get worse for everyone but fail to get any better. At the end of the movie, they’re still where they were when they landed on Earth in the first film, except just about everybody is dead now. Godzilla’s still walking about. They just summoned an astral dragon, and then dismissed it while changing absolutely nothing else. Roll credits. You could simply have watched part one and be just as satisfied as you would be watching the other three hours of this story.

That said, it is the best of the three. It’s not saying much but what we do get are good character moments between Haruo and Metphies, a (mostly) satisfying ending, and some sweet visuals with the world’s longest Ghidorah whose million-mile neck is funnier than it is anything else, but whose shadowy entrance and resplendent astral form is rather sinister and affecting. It’s definitely saved the trilogy for me, but I’d still have a hard time recommending it as it still suffers from uninteresting animation and character design, as well as an overwrought story. Much like its titular character the trilogy is big, imposing, but barely goes anywhere.

Verdict: It might not be high-tier Godzilla fare, but The Planet Eater is at least better than its predecessors and offers a different take on the kaiju’s lore.

Overall entertainment: 6.8/10
Violence: Not nearly enough/10
Sex: Way not nearly enough/10
Ideas: 8/10
Execution: 5/10
Colour schemes: Blue. Or orange. Take your pick.
Speaking exposition while looking at charts: 10/10
Ghidorah summon: Looks a bit too much like the Diablos summon in FFVIII