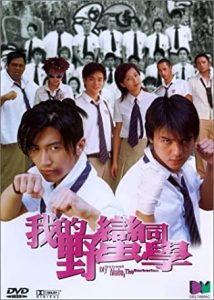 “There have never been triad activities, because there’s an underground tradition more barbaric than the triad.”

If there’s a category of story that’s never really taken off in the west it’s that of the Fighting High School. I’m sure it has an official name, which I won’t look up right now, but for those not in the know I’m referring to a movie, show or manga that’s set in a high school where all the students fight their way to rank and glory. Normally the teachers know what’s going on, but don’t have the energy to care and do anything about it. The story usually involves a transfer student coming in and ultimately defeating the reigning senior, who’s usually been held back a few years. I always get a kick out of putting one on (even if they don’t always live up to their expectations), so I was keen to see what a Hong Kong buddy-comedy version, written by Wong Jing no less, would look like.

Stephen Fung plays ­Edward, an overachieving high schooler who is kicked out of his prestigious school after a few wacky misunderstandings. His mother (Serena Po), who is never around, suggests another school for him to go to, but her assistants misunderstand her and send Edward to TBS Memorial Secondary School, a school for delinquents and ruffians where students settle their scores in one-to-one martial arts battles on top of the desks. He gets in the way of wannabe triad Big Mouth (Ka Ho Yu), and promptly gets the shit kicked out of him.

Eventually he does make a few friends, including the slightly annoying Phoenix (Joey Yung) and the former combat champion Stone (Nicholas Tse), who retired from fighting. Stone, meanwhile, is struggling to pass his final year, is always being challenged to a fight by current champion Mantis (Samuel Pang) and offers to help Edward learn to fight, as Edward helps him study. There’s some fighting, some triad stuff, and it all ends exactly the way you’d expect.

I had a hard time trying to put into words whether or not I actually liked My Schoolmate the Barbarian. It’s a tonally inconsistent movie that isn’t sure whether it wants to be an imitation of Stephen Chow, something milder or an entirely different, much more serious, movie. It has flashes of all of the above, and never seems to know which one it wants to focus on. The story is at least straightforward enough but while it never really deviates from what we’d expect from the genre, it’s told capably and well. The same goes for many of the actors, who are by far the strongest part of the production. Tse has an innate charisma that makes his character effortlessly charming, and even the villains like Mantis and Big Mouth are fun to watch, which I can’t say for every high school-set story.

But while characters and plot are important in any story, they come second in a Fighting School film. A product in this genre is really only as good as its action, after all, and competence in front of and behind the camera is vital. Schoolmate has some inventive ideas, but all of the action (and there isn’t a tonne to begin with) is shot and edited using all of the worst techniques from the late ‘90s and early ‘00s. Angles are pointlessly Dutch, tonnes of needless close-ups obscure all the choreography and blurry slow-motion makes whatever’s left completely unexciting. It’s choices like this that really drag Schoolmate down.

As a satirical take on the world of Band 5 schools, it doesn’t really do much except for make a few obvious jokes. As a Hong Kong production it could have put its own stamp on the typically Japanese delinquent genre by not only pointing out the flaws of Hong Kong’s education system but also giving us something which could only come from there: top notch action. By using terrible Hollywood shortcuts and stylistic choices which are more reminiscent of The One than anything else, it dates itself terribly and wastes the best opportunity it had to really stand out.

But, with all that said, it’s not like it’s a terrible film by any stretch. I didn’t hate it, let’s put it that way. By the time the end credits rolled, I wasn’t annoyed that I’d seen it as we’d gotten to know the main cast better, and the story had started to make sense but it really was a case of too little, too late. Ultimately it’s an infinitely better experience than Volcano High, but falters to films like Takashi Miike’s Crows Zero. My Schoolmate the Barbarian stands out enough by keeping its tone light and its protagonists likeable, but really there’s not a lot to keep you invested during its (thankfully short) runtime. Stick to Kill la Kill instead.

Verdict: Slow to start and hard to get into, My Schoolmate the Barbarian does grow on you, but what are the chances anyone will stick around for it.

My Schoolmate the Barbarian (2001)
Cantonese