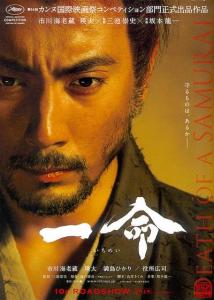 “I am told you wish to commit ritual suicide here.”

When I sat down to watch this film, I had no idea it was a remake, but if you had asked me I would have probably thought it was based off a novel of sorts (I just checked and, hey, apparently it’s a short story). Why would I think this? Largely due to the way the story is told. Much like in a Grove by Ryunosuke Akutagawa, or the short stories by Natsume Soseki, Hara-kiri: Death of a Samurai is a story that consists of an overarching narrative, in which several other stories are told.

In this case, it’s the story of a man named Hanshiro, a samurai who comes to the estate of the Ii clan, wishing to commit seppuku. Apparently suffering an increase in hoax-seppuku claims (from down on their luck ronin who hope their plea will result in some freebies from the lords), the senior advisor (Naoto Takenaka) tells him the story of a man named Motome (Eita) who recently also came before the lords, begging to use their courtyard to commit seppuku.

The senior samurai understood that this was another hoax and decide not to give Motome any money, instead choosing to make an example of him. They force him to keep his word, even making him use the bamboo sword he kept on him as a prop. However, Hanshiro is neither disturbed nor deterred. He insists on an audience for his ritual suicide. In the courtyard, many samurai, and leaders of the Ii clan surround Hanshiro, but he does not kill himself. Instead, he decides to tell the clan his own story…

As for the nature of Hanshiro’s story, well, you’ll obviously have to watch it. I thankfully didn’t know much about this film when I went into it: to me it was a Takashi Miike film that looked well-made and largely good, and probably similar in tone to 13 Assassins. I didn’t even read the back of the blu-ray box, so I was surprised to find that Hara-Kiri: Death of a Samurai was more of a drama than anything else, and moves much slower than I anticipated.

And man does it work to the film’s credit. Again, not knowing it was based off anything previous, and expecting the standard Miike carnage, it’s really pleasing to see what was in fact a much more thoughtful , moving and emotionally poignant film. This is largely down to Yasuhiko Takiguchi and Kikumi Yamagishi’s screenplay, as well as the performances from Ichikawa, Eita and Hikari Mitsushima (who plays Motome’s wife). Ichikawa is the heir to the prestigious kabuki performance clan, and his portrayal of Hanshiro is an excellent display of his skills.

And because this is a Miike film there are a good couple of moments of sheer brutality, although they are very few and far apart. Most memorably is the scene where Motome is forced to commit seppuku with his bamboo sword. The scene goes on for a long time, and we get to experience every harrowing moment of that along with the samurai. It’s a gut-wrenching sequences that gets worse with every passing moment, and it’s easily one of the more memorable.

Hara-Kiri: Death of a Samurai (or as it’s affectingly called in Japan, A Life) is a very good film that only suffers when it drags in the middle. While there definitely could have been a few minutes cut out of scenes here and there, the ultimate impression is leaves upon you is definitely positive and very memorable.

Verdict: Hara-Kiri: Death of a Samurai is an excellent drama full of striking imagery and dramatic moments.