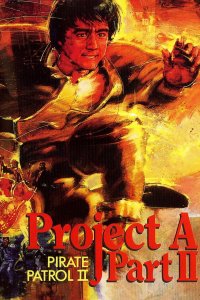 A sequel to one of the greatest Hong Kong action films ever made: so how does Jackie Chan’s comedy hold up?

Project A was one of the finest films produced by any of the Three Dragons – that is, Jackie Chan, Sammo Hung and Yuen Biao – either together or apart. It was a perfect blend of stunts, comedy, adventure and great characters. Additionally, it was a huge success at the box office so a sequel was naturally in the works. But, like all sequels to great films, it would no doubt be put under serious critical scrutiny. A film that opens with a montage of its original’s finest moments? Well, now there’s an uphill climb.

The straightforwardly-titled Project A Part II picks up immediately after the first one ends. Like, seconds after with whatever is left of the pirate organisation landing on shore. They immediately swear vengeance on Dragon Ma (Jackie Chan), and then sort of disappear for the majority of the movie. Meanwhile Sai Wan district superintendent Chun (David Lam) is suspected of staging his arrests to make himself look good. Ma has been given the assignment to work with him, so the Chief Bill (Bill Tung) can eventually fire Chun.

After proving to the other officers at the station that he means business (and that means no bribes), he and his friends begin to make a name for themselves within the district. It is there they meet two women – Maggie (Maggie Cheung) and Carina (Carina Lau; I’m really starting to see a naming convention here) – who is a member of a group of Chinese revolutionaries headed by Dr Sun Yat-sen. Ma ends up embroiled in a plot involving a stolen diamond necklace as the plots slowly begin to come together.

Sort of. And therein lies the first problem with Project A Part II: it’s comprised of a number of separate plots that don’t really go together all that well until the last act – and even then it’s a bit of a stretch. I get the impression that has to do with Chan and his cowriter Edward Tang wanting to up the stakes and make a richer, more politically complex storyline. After all, it’s exactly what a good story should be. But instead of finding one strong aspect (corruption in the police force, pirates wanting revenge, revolution against the colonists) and running with it, it takes all three and hopes to make something out of it.

Let’s look at another sequel to an excellent Jackie Chan film: Drunken Master II opted to do away with anything related to the first film and instead did its own completely different thing. Creating a sequel that has no connection to the original is tricky, and runs the risk of alienating audiences who were excited to see a continuation of a story. However, going the other direction leaves the film open to comparison. In this instance, Project A Part II would have actually been better as its own individual film, without the shackles of expecting Sammo, Biao or a film to the calibre of its predecessor.

In a lot of ways, it’s quite a solid Jackie Chan action comedy. It ticks all of the right boxes, and contains one of my favourite chase scenes in all of cinema (when Chun and Ma, handcuffed together, must escape the pirates). There’s a tonne in Project A Part II to like, and focusing on the negatives isn’t doing it any justice. Chan is great by himself, and the myriad co-stars and collaborators bring a tonne of life to the film, and lots of personality. Maggie Cheung’s comedic chops are on point here, expertly navigating her way through the farcical “everyone hiding in the house” scenes.

On top of this, it’s loaded with great sight gags and slapstick (Ma hiding as a character in a painting is great bit of visual comedy), and the set design is again top notch. If it wasn’t so closely linked to one of the finest Hong Kong comedies ever made, a lot of its sins might be forgiven. But knowing that it’s missing two of the Three Dragons (and two of the better characters from the original), and seeing that none of the battles have any of the magic of that opening clash between the army and the navy, it’s inevitable that Project A Part II is going to look flat in comparison. Is it worth a watch? Definitely, especially if you’re running low on great 80s kung fu comedies. But don’t go in expect … well, Project A’s second part.