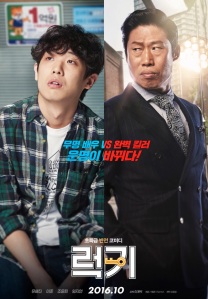 Lee Gae-byok’s comedy has plenty of charm to go around, but never quite hits the heights it could.

“I brought you here. You slipped in the public bath.”
“I slipped at the bath?”
“This morning. Don’t you remember?”

Amnesia films can be a tricky one to pull off. Many of the films in this niche have a very specific aim – a successful or attractive person loses their memory, and is taken advantage of by someone who’s generally down on their luck. Overboard is a prime example of this, but you see elements of this in films such as 50 First Dates. Considering the dicey nature of this, it helps to have a likeable lead and enough shenanigans to go around, to make the audience forget the awful nature of it. in 2016, Korea released their movie, based off a Japanese film titled Key of Life.

In Lucky Key Jae-sung (Lee Joon) is a struggling actor whose life is in a pretty bad place. So bad, in fact, that at the start of the film he’s about ready to hang himself. However, he instead decides to go to a bath after his landlady tells him how much he reeks. Hyung-wook (Yoo Hae-jin) is a contract killer who is also at the baths. A rogue soap of the floor causes him to slip and hit his head, knocking him out. Jae-sung sees this as an opportunity, and switches locker keys with him. Jae-sung discovers Hyung-wook is loaded, and begins paying everyone he owes money to back.

Meanwhile, Hyung-wook has awoken with no memory of what happened, or who he even is. He begins to piece his “life” together using clues from Jae-sung’s locker. Aided by paramedic Lee-na (Jo Yoon-hee), he starts working at her family’s restaurant while also going to the acting gigs Jae-sung had booked for himself, and he begins to carve a life for himself despite his memory loss. Meanwhile, Jae-Sung (now opting to live in Hyung-wook’s luxury apartment) discovers a girl (Lim Ji-yeon) being spied on by Hyung-wook, and begins to investigate who she is, while slowly learning Hyung-wook’s real job.

In essence, Luck Key is two completely different movies and one is clearly better than the other. The story of the amnesiac Hyung-wook is much more engaging than the other one. And it’s not like the mystery Jae-sung isn’t good, but it just takes a while to kick off and for the longest time, Jae-sung is just shown to be something of a jerk. It’s hard to really root for the guy when he spends a good chunk of the movie effectively stealing from a guy he barely knows. That he thinks Hyung-wook is a cop for a while kind of makes it worse than if he had known the guy was an assassin.

Jae-sung is actively awful, but he never really learns a lesson from acting terribly. It’s all played for laughs, and Lee Joon is charming enough to pull it off, but it’s a subplot that’s always balancing between being good, and tumbling into darkness. This is the opposite for Hyung-wook, and Yoo Hae-jin plays him with the same affability he brings to lots of his roles. What’s surprising is that he manages to make his character actually quite cool and slick when he has his memories. It’s a nice contrast between the Killer, and the guy he is beneath and gives Yoo Hae-jin a lot of material to work with.

The cast is rounded out nicely through some very affable female costars, and a few wacky side characters. Luck Key never lingers too long on any particular moment, so nothing really overstays its welcome, and it manages to get a lot done in its runtime (which is, admittedly, padded out sometimes). I’ve not seen the movie this is based off, so I can’t tell what was original or not, but Jang Yoon-mi’s screenplay manages to squeeze some good gags and humorous situations out of what ran the risk of being a tired, worn-out premise.

Luck Key could have used with some tighter pacing, and maybe something more interesting for Jae-sung’s story. The mistaken identity story lends itself to serious shenanigans and rooftop chases, with the hapless hero barely scraping by. That he effectively does nothing for the entirety of the film (except one quite clever instance of a meeting with his patrons, hiding his own identity) feels like a wasted opportunity. Thankfully it all comes together at the end, after giving us a pretty solid twist that wraps the story up nicely.

Verdict: Luck-Key is pretty standard fare but is bolstered nicely by its premise and likeable cast.

Overall entertainment: 7/10
Violence: Acting/10
Sex: One men’s bathhouse/10
A-plot: 8/10
B-plot: 6/10
International Poster: The ‘He is Back’ tagline makes this seem like a sequel
Actors: Choi Min-suk feels like a dig at Choi Min-sik, but why?
Korean cinema industry: Often used as a backdrop for comedy crime films. Why is this?