The odyssey continues in part two of Jeffrey Lau’s Journey to the West adaptation.

Last week, I looked at one of the most iconic adaptations of Wu Cheng’en’s Journey to the West – a 1995 two-part movie event called A Chinese Oydssey. That film made reference to a number of characters and events from the novel, but never really felt all that connected to it: with Tang Sangzang almost entirely absent, and his three companions now human reincarnations (with no memory of their previous selves), Pandora’s Box felt more like a period fantasy than a proper  Journey adaptation. It ended with a teaser for part two, and showed us the characters in full animal makeup, as well as some exciting action and sets: all very promising stuff. So how does it hold up?

A Chinese Odyssey Part 2: Cinderella starts where the first instalment left off, with Joker (Sun Wukong, played by Stephen Chow) having travelled back in time 500 years to before his imprisonment at the start of part one. There he meets the fairy Zixia (Athena Chu) whose sword can only be unsheathed by the man she is destined to marry. Naturally, Joker manages this – beginning yet more complicated romantic shenanigans as he wants nothing but to find the Pandora’s Box to get back to Jing-jing. However, things get complicated when the Demon Bull King (Lu Shuming) shows up again, kidnapping both Jixia and the Longevity Monk (Law Kar-ying).

Cinderella takes what was set up in part one and uses … most of it fairly well. Everything feels a lot more focused, from the storytelling to the character work, and all the stuff in between benefits from it. It puts a lot more emphasis on Joker as a character, and there’s a lot of depth there, when it isn’t being hidden behind shtick and ludicrous moments of physical comedy. I was actually very impressed how much they were able to make Joker into a complex character, and the scenes when he understands his destiny as the monk’s protector and has to leave everything behind are hugely affecting. Props to Chow and the excellent monkey makeup he’s been given which allows him to emote properly. 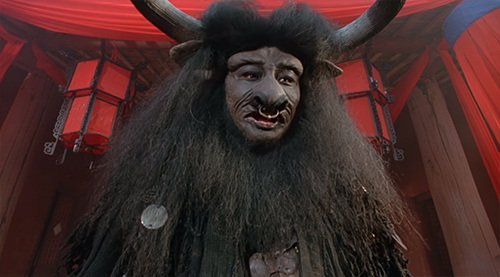 The majority of the players from part one return, with the exception of Jing-jing and Spider Woman, who make only small cameos. Zhu Bajie and Sha Wujing make proper appearances at long and round out the cast nicely, making this one feel a hell of a lot more like a Journey to the West movie than the previous one. The Monk is given something of a dumb role, but it’s kind of fun. Journey adaptations never seem to know what to do with Tang but it allows the filmmakers creativity and here Law plays him as a man constantly spouting “wisdom”, much to the chagrin of everyone – including Guanyin herself. It’s a fun joke that helps make this version of the Monk more than just an NPC in an escort mission.

A Chinese Odyssey is one of the best-known adaptations of the book – and was until Chow returned, this time behind the camera, in Conquering the Demons – and although it hasn’t aged flawlessly, it still is able to stand on its own as a very unique take on the characters and events from the film. It’s an odyssey that’s very small in scale, but that’s fine. This is less a physical journey for our four heroes and more an internal one for Sun Wukong, and in that respect it actually has a lot to say. This is the film that gave Wukong a heart, and countless films have tried to emulate that since, but none have been as successful and have shown it so effectively as that one scene of him walking away, joining his fellow travellers.

Did it need to be in two parts? Probably not. Part one spent so much time meandering, and offering up hooks and relationships that don’t really affect part two that the Odyssey could have been told in just one long film. It’s tough to tell whether that would have improved the pacing but perhaps it could have made things feel a bit neater. As it is, Cinderella is certainly good by itself (though it makes part one necessary watching, of course).  A Chinese Odyssey isn’t greater than the sum of its parts, but it’s not weaker. As a Journey adaptation it isn’t particularly great, but as an exploration of the complex character of Sun Wukong, there’s something strong to witness. Some journeys seem aimless until the very end – and in this case the final shot, and the ultimate destination – make the distance travelled worth it.

Verdict: Not perfect, A Chinese Odyssey Part 2: Cinderella does vital work in establishing the Monkey King in a way that would influence the story for years.

Overall entertainment: 7.5/10
Violence: 5/10
Sex: 1/10
Faithfulness: 3/10
Jokes: The life-sucking demon bit was great
Song numbers: One, surprisingly, out of nowhere
Animal masks: So, so many