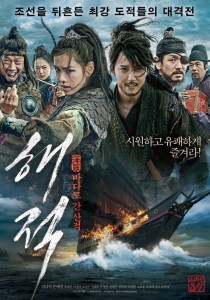 “They say whales are angels sent by the Sea God”

It’s tricky to be a blockbuster pirate film in this post-Pirates of the Caribbean world. On one hand, the series revitalised the genre, and made pirates cool after Renny Harlin did everything in his power to ruin them, but on the other hand, you can’t really be a pirate film without the inevitable comparison. The Pirates suffered from this as well, being called the Korean Pirates of the Caribbean despite not really having a lot, or even anything, in common save for the fact that they’re both big-budget films about pirates.

Set in the late fourteenth century, at the dawn of Joseon dynasty, The Pirates tells the stories of multiple characters, each chasing the same thing: a whale that destroyed a royal boat and ate the priceless royal seal. Son Ye-jin plays Yeo-wol, the new captain of a band of pirates after a recent mutiny. Fair to her crewmates but merciless, she and her pirates are coerced by Mo Heung-gap (Kim Tae-woo as), a treasonous naval officer who has been tasked with finding the seal by the ruthless emperor Yi Seong-gye (Lee Dae-yeon).

Meanwhile, a crew of bandits led by Jang Sa-jung (Kim Nam-gil), who has a personal history with Mo, try their hand at seafaring to capture the whale, despite never having been at sea before. They are helped by bumbling ex-pirate Chul-bong (Yoo Hae-jin), who was once in the employ of captain Yeo-wol.

The Pirates’ biggest strength lies in its actors, and the characters they play. Armed with the knowledge that this film is fun and not to be taken seriously, everyone involved is clearly having great time. Yeo-wol is a pretty legitimate badass, whose backstory isn’t much elaborated upon but who manages to convince us of her toughness without making her seem like the generic “one dimensional tough-chick” archetype. The same goes with Kim Nam-gil as Sa-jung who has enough charm to carry his character through even the dumbest scenes.

Both leads are very likeable, which is one of the reasons the film feels shorter than its 130 minute runtime. The villains – both the naval officer and ex-Captain So-ma (Lee Kyoung-Young) – are dastardly in their own way, and the supporting cast come together to create an entertaining melange of characters which are different enough to make the film feel big in scale.

The action sequences, too, help in creating the sort-of-epic feel. The effects are good, not great, but there’s a cartoonish feel throughout so it’s less jarring. Director Lee Suk-Hoon whips out a few exciting set pieces, most notably one set in a small fishing village, to keep the film flowing at a brisk pace. Less exciting are the scenes featuring one-on-one combat, which have quickfire, attention deficit editing filled (and I mean crammed) with unnecessary slow-mo after unnecessary slow-mo, shaky cam and blurry visuals to make sure everyone watching is confused and annoyed.

The story is also one of its weak points. It’s predictable, and hardly anything original, but considering how big they try to make the film, it never gets lost in its own stories and everything comes together neatly at the end, so that has to count for something. Once again, a lot of this is down to the cast who make this a fun experience. There are also some neat twists on the genre; I particularly liked the idea that half the characters had zero nautical experience whatsoever, and the movie gets some pretty solid laughs from exploiting this, such as their incredulity at Chul-bong’s description of a whale, and then their disbelief that something so immense could exist when they come face to face with it.

Overall, The Pirates is nothing new and some of the camerawork and storytelling is too much inspired by the worst of Hollywood, but it has enough fun action sequences and laughs to make it worth your time.

Verdict: Enjoyable to say the least, The Pirates’ won’t blow you away but if you’re looking for dumb swashbuckling fun, this is the one for you.