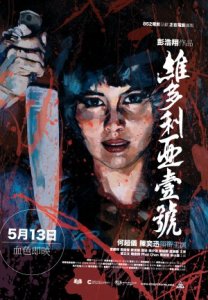 Pang Ho-cheung’s housing market-themed slasher film is never sure if it’s funny, scary or neither.

“Who will go into the market at this moment, except fools like you?”

Is there a phrase, any famous quote out there, about how lethal the housing market it? Because that would be a good way to start this review about a woman whose dream to own a sweet apartment causes her to go nuts. No? Alright, then. Straight to the plot:

Josie Ho stars as Cheng Lai-sheung, a woman with a single dream: own an apartment with a sea view at the Victoria Bay no. 1 complex. Working two jobs and saving every penny, she is slowly beginning to see this come into effect, even if the rest of her life is floundering. Her sole romantic interest is Siu (Eason Chan, practising his sleazebag routine for 2015’s Office), who is spectacularly unlikeable, despite only being in about 3 scenes.

Through flashbacks we’re shown how her family was thrown out of affordable housing to make room for swankier flats, and now she lives in a tiny place, looking after her dying father. As the difficulties of first-time buying start to get to her, Lai-sheung’s morality begins to take some questionable turns, and once her deposit is rejected in favour of putting the asking price up, she snaps. She breaks into the apartment complex and goes from place to place, hacking and slashing her way through the tenants that live there. (It occurs to me that I’ve basically written down the whole plot here, but the film is told in nonlinear fashion, which makes talking about it difficult).

Right off the bat, Dream Home starts with a bang. It doesn’t try to fool us into thinking it’s anything other than the blood bath we came in expecting, A security guard is keeping watch over his block of flats when a figure slips in and chokes him with a zip tie. Struggling, and slowly dying, the guard snatches a knife and begins to slash at his neck in an attempt to get the tie off, slitting his throat in the process. It’s a grim scene that would be at home in a Saw movie, but it certainly works in drawing the audience into the story.

This is good, really, because once the action changes to Lai-sheung’s everyday, nonlinear life it tends to slow down quite a bit. There’s plenty of set-up, and I understand why it’s there, but every time they cut to the rampage through the apartment complex, you wish you could just stay there a bit longer. It’s director Pang Ho-cheung’s way of exploring the housing crisis in Hong Kong and the film probably wouldn’t be as strong without it. We need to see what Lai-sheung’s going through, and how much owning an apartment in Victoria Bay means to her, so her snapping and going Michael Myers on everyone has context.

It’s refreshing to see a slasher film have something to say. And having a villain who is during the entirety of the movie the hero is a pretty clever twist on the genre. In any other setting, the audience would have spent the whole evening with the stoners and watched as this woman comes out of nowhere and slaughters all of them brutally. Instead, we’re led to sympathise with Lai-sheung and it says something of Josie Ho’s performance (and the editing that shows her plight interspersed with the violence) that we still like her, even as she leaves a trail of bodies Jason Voorhees would blush at. Well, maybe we lose some sympathy for her here and there – that asphyxiation scene for starters – but we’re still on her side for most of the story.

The larger issues lie in Dream Home’s inability to stick to any one genre. Sometimes it wants to say so much about housing in Hong Kong (and goes out of its way to foreshadow the 2008 credit crunch at the end), and other times it switches between comedy and horror that frankly I have no idea how to classify it. Some of the deaths are just too funny while being absolutely horrific. Saying it’s satire is probably the closest you can get, even if it doesn’t hit the nail on the head every time.

But let’s talk about the murders for a minute. From the brutal execution of the first unsuspecting security guard to the completely wacky takedown of two cops (I swear they both got injured by complete accident, and then just gave up on life), the deaths are inventive, extremely violent and a hell of a lot of fun to watch. OK, sometimes you’re reminded of the bleakness of all of this (take the husband who comes home to find his pregnant wife suffocated to death), but Dream Home’s tongue is in its cheek just enough for you to never dwell on these miseries for too long.

It’s a mixed bag of genres, styles and timelines but for what it’s worth, Dream Home is a great time. It doesn’t suffer from the usual dip in speed midway, but that’s only because it’s spread its slowness throughout the whole movie: that can either be good or bad, and in this film’s case it’s veering more on the bad. The clash of themes as the narrative jumps around in time isn’t always very smooth, and it’s that sort of jarring effect that can take someone out of a movie. But for what it’s worth, I don’t regret seeing it. It had everything a good slasher film should have, with a bit of meaning sprinkled on top, for flavour. It’s not as good as an apartment in Victoria Bay, but it’s good enough.

Verdict: Dream Home has moments to appeal to both slasher aficionados and fans of underdeveloped satire, but I doubt the twain shall often meet.